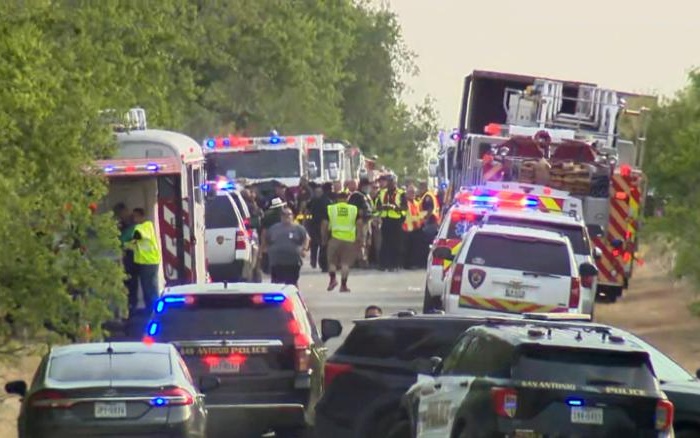 Emergency personnel at the site in San Antonio, Texas where the bodies of 46 immigrants were found in a truck

I spoke with Times Radio and BBC Radio Scotland on Tuesday about the broken US immigration system, largely thanks to the Trump Administration, amid 46 immigrants dying inside a scorching-hot truck in San Antonio, Texas.

I discuss the anti-immigrant rhetoric and actions of Trump and his officials, the fixation with The Wall, and the dismantling of the system from courts to shelters.

And I respond sharply to Texas Governor Greg Abbott, lying about “open borders” under the Biden Administration in an attempt to divert blame — including from his own measures over immigration.

There is no open border. I was really distressed with his remarks, not just because they are cheap politics but because they aren’t true and don’t help us deal with what has happened here….

You need a system which while maintaining your border, provides for some level of safety and security for migrants. They are human beings after all, whether you consider them legal or illegal.

The headline distraction of The Wall, coupled with Trump’s demonizing of immigrants, puts us in a 2022 where we’re not having a productive discussion on what should be done.

Listen to BBC Radio Scotland from 42:37