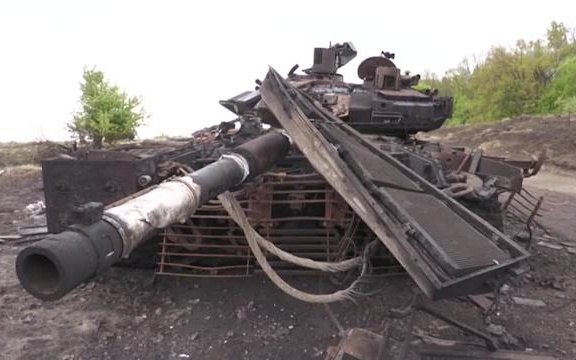 The wreckage of a Russian tank in the village of Rubizhne, near Kharkiv in northeast Ukraine (Yahoo!) 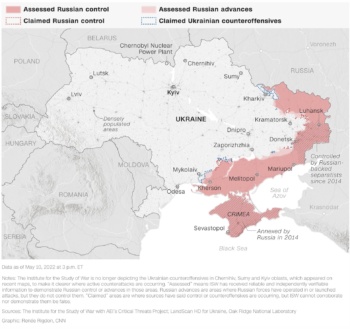 As the Russian proxy administration in occupied Kherson threatens to join the Russian State (see 1152 GMT), a resident of the southern Ukrainian city says it is like a “zombie apocalypse”.

It’s very hard to live in such conditions, physically, because you cannot do things that you did before the war You can’t go out as much, you can’t breathe fresh air, so it’s hard physically.”

Psychologically, it’s even more harder because you see all those empty shelves in the stores, you see all those armed people going out to walk by you, by the street, and it’s terrifying because they are all around the city. So it’s hard.

Expressing her fear of patrolling Russian soldiers, Tanya said no one whom she knows wants to be part of Russia.

Held regular talks with 🇩🇪 Chancellor @Bundeskanzler. Talked about defensive aid, cooperation in the energy sector, increasing sanctions on the Russian aggressor. We appreciate the high level of dialogue with 🇩🇪 and support in our struggle!

China’s former Ambassador to Ukraine, Gao Yusheng, has criticized Russia’s invasion in an online presentation to a Chinese Academy of Social Sciences seminar.

Putin regime’s foreign policy views former Soviet states as its exclusive sphere of influence. Its core and foremost goal is to restore the empire through integration mechanisms in various fields dominated by Russia.

Therefore, Russia is duplicitous and reneges on its promises. It has never truly recognized the independence, sovereignty, and territorial integrity of other former Soviet countries, and frequently violates their territories and sovereignty.

It can be said that Russia has completely lost Ukraine.

At the same time, the former Soviet Union, with the exception of white Russia, including the members of the Collective Security Treaty and the Eurasian Economic Union, have refused to support Russia. Russia’s defeat would leave it with no hope of rebuilding its old empire.

The Chinese outlet Pheonix News reported on the presentation, but the article was soon removed from the Internet. An archived copy is available.

Ukrainian authorities will try three Russian prisoners of war and another solder in the first war crimes trials of the Russian invasion.

The trio are accused of targeting or murdering civilians. The soldier allegedly killed a man before raping his wife.

The office of Ukraine’s Prosecutor General has registered more than 10,700 claimed war crimes since the invasion began on February 24.

The Russian Foreign Ministry has summoned the Polish Ambassador and stomped its foot over protesters’ dousing of the Russian Ambassador to Poland, Sergey Andreev, with red paint at the Soviet military cemetery in Warsaw on Monday.

Russia expects an official apology from the Polish leadership in connection with the incident and demands the safety of the Russian ambassador and all employees of Russian foreign institutions in Poland are ensured.

A decision on further steps will be taken depending on Warsaw’s reaction to our demands.

The “Donetsk People’s Republic” said in a statement, “Access to the information resources of the American company Meta, which allows calls for violence against Russian-speaking users on its social networks, has already been blocked. In light of this, access to the Facebook and Instagram social networks is blocked on the republic’s territory.”

Moscow’s proxy leader in the Russian-occupied Kherson, in southern Ukraine, says he will ask Vladimir Putin “to make Kherson region a full subject of the Russian Federation”.

Kirill Stremousov, the Russian-appointed deputy head of the military-civilian administration in Kherson, said the area will be fully under Russian law “by the end of the year”.

Kremlin spokesperson Dmitry Peskov responded with the pretence that it is up to Kherson’s residents if they want to join Russia.

Kharkiv regional governor Oleh Synyehubov has written about Ukrainian success in pushing back Russian forces in the northeast:

Thanks to the successful actions of the armed forces and the liberation of a number of settlements in Kharkiv, it is now relatively quiet.

Still it is impossible to lose vigilance. You need to be very careful and not be on the street unnecessarily. It is also dangerous to return to the recently liberated settlements. The enemy completely mined everything, including schools, kindergartens, and private homes.

At the same time, all the war crimes of the occupiers are recorded, which prove the inhuman nature of the enemy.

Russia’s RuTube video platform has been knocked offline by the hackers of Anonymous.

RuTube disappeared on Monday, about an hour before Russia’s Victory Day ceremonies, and is still down today.

“We have, in fact, been hit with the biggest cyberattack in Rutube’s history,” the platform confirmed on Tuesday. “Restoring [access] will take more time than engineers first thought.”

This morning the online Russian TV schedule page was hacked

The name of every programme was changed to "On your hands is the blood of thousands of Ukrainians and their hundreds of murdered children. TV and the authorities are lying. No to war" pic.twitter.com/P2uCNz8cqa

The US House of Representatives, by a vote of 368-57, has passed a $39.8 billion package of economic, humanitarian, and military aid to Ukraine. The measure now goes to the Senate for approval.

I thank @SpeakerPelosi and all friends of 🇺🇦 in 🇺🇸 House of Representatives for the quick approval of the law on additional financial support for our state initiated by @POTUS. We are looking forward to consideration of this important document for us by the Senate.

Petro Andriushchenko, An advisor to Mariupol’s mayor, wrote of the latest Russian attack, “They tried to break through the bridge that served as a gate for the evacuation [of civilians]. Unsuccessfully.”

The Donetsk region’s police chief Mykhailo Vershynin, speaking from inside the plant, explained, “The aviation strikes don’t stop. Since the morning, the shelling from tanks, artillery, aviation, naval artillery — the shelling is all the time.”

Vershynin said more than 1,000 soldiers are holding out against the Russian attempts to overrun the complex. More than 500 are wounded, a number increasing “every day”.

The defenders released a series of photos on Telegram on Wednesday morning of injured, crippled fighters in the makeshift field hospital: “We call on the UN and the Red Cross to show their humanity and reaffirm the basic principles on which you were created by rescuing wounded people who are no longer combatants.”

Ukraine President Volodymyr Zelensky said the Government had tried “all possible diplomatic tools” to rescue the soldiers, but Russia had rejected all the proposals. 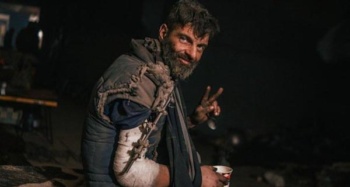 The report points to the significance of Ukraine’s sinking of Russia’s Black Sea flagship Moskva on April 14, “Russia’s resupply vessels have minimum protection in the western Black Sea, following the Russian Navy’s retreat to Crimea after the loss of the Moskva.”

It continues that Russia is trying to replace its losses from Ukrainian strikes on Zmiinyi (Snake) Island, but the deployment presents “more opportunities to engage Russian troops and attrit materiel”.

The Ukraine military said on Saturday that its drones had sunk a landing craft on the island, which has become a symbol of Ukrainian resistance to Vaadimir Putin’s invasion.

Satellite photos showed most of the buildings were flattened. The Ukraine military and officials also said two patrol boats and a helicopter were destroyed.

ORIGINAL ENTRY: Ukraine’s forces have reclaimed more villages near Kharkiv, in the northeast, from Russian occupation.

The Ukrainian counter-offensive could advance to the Russian border. Equally important, it puts pressure on Russia’s attempt to claim territory near Russian proxy areas in the Donbas in eastern Ukraine.

Both the Ukrainian military and US-based analysts say the Russians are deploying forces near Kharkiv to check the counter-offensive. That deployment is diverting Moscow’s forces from the Donbas offensive, which has struggled and made only incremental gains in the past month.

The Ukrainian advance could put it within striking distance of Russia’s rear supply lines sustaining the Donbas operation.

Defense Ministry advisor Yuriy Saks said Russian forces are being pushed to a line putting Kharkiv “beyond the reach of their artillery”.

In his nightly address to the nation, Ukraine President Volodymyr Zelenskiy said the liberation points to a new phase of resistance against the Russian invasion, but he cautioned against expecting “certain victories”.

The Armed Forces of our state provided us all with good news from the Kharkiv region. The occupiers are gradually being pushed away from Kharkiv.

I am grateful to all our defenders who are holding the line and demonstrating truly superhuman strength to drive out the army of invaders. Once the second most powerful army in the world.

But I also want to urge all our people, and especially those in the rear, not to spread excessive emotions. We shouldn’t create an atmosphere of specific moral pressure, when certain victories are expected weekly and even daily.

US: Putin “Preparing for Prolonged Conflict”

In public assessments on Tuesday, the US’s top intelligence officers paralleled Ukraine’s assessment. Director National Intelligence Avril Haines told a Senate committee, “It is increasingly unlikely that they will be able to establish control over both oblasts [Donetsk and Luhansk in the Donbas] and the buffer zone they desire in the coming weeks.”

Haines also said the Russians would struggle to advance across southern Ukraine, extending west to the port city of Odesa and to Russian-occupied Transnistria in neighboring Moldova.

“They will not be able to extend control over a land bridge that stretches to Transnistria and includes Odesa without launching some form of mobilization,” she explained.

But the Director said Vladimir Putin, having failed to achieve his initial objectives, will not be deterred for now from “preparing for prolonged conflict”, seeking control of the Donetsk and Luhansk regions, the land bridge to Russian-occupied Crimea to the south and Transnistria to the west; and to hold the Kherson region in the south, controlling Crimea’s water supply.