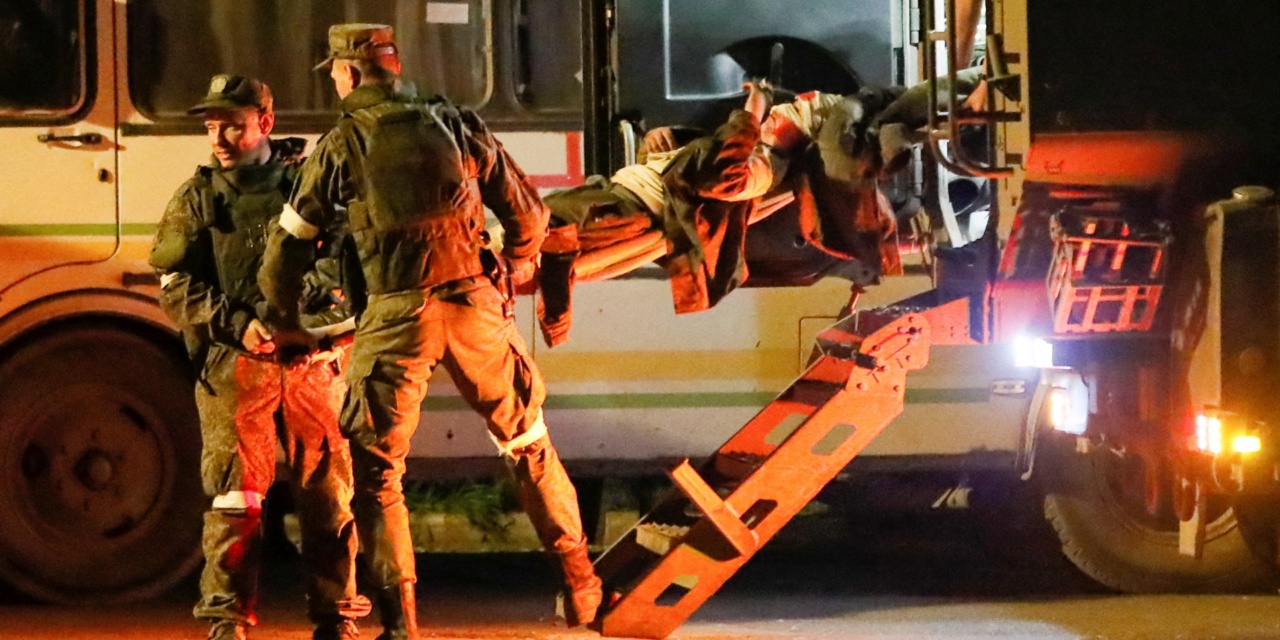 Wounded Ukrainian fighters are moved out of the Azovstal steel plant in Russian-occupied Mariupol in southern Ukraine, May 16, 2022 (Alexander Ermochenko/Reuters) 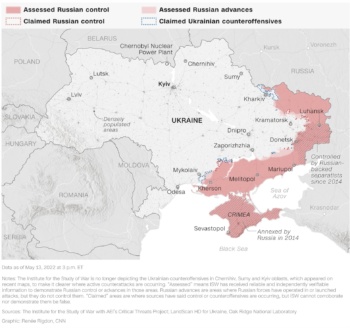 An aide to Ukraine President Volodymyr Zelenskiy has confirmed a deadly Russian strike in eastern Ukraine on Tuesday.

As a result of the Russian airstrike on Bakhmut, Donetsk region, on May 17, five civilians were killed, including a two-year-old child, and four residents were injured. pic.twitter.com/3M76xMe4ON

Following the lead of dozens of other countries, the US has reopened its embassy in Ukraine’s capital Kyiv, initially with a small number of staff.

The embassy closed on February 14, 10 days before the Russian invasion of Ukraine and threat to overrun Kyiv.

Canadian Foreign Minister Mélanie Joly has said Vladimir Putin “cannot imagine a reality in which the press is allowed to operate without taking their marching orders from the government”.

Joly was speaking after Russian officials closed the Moscow bureau of the Canadian Broadcasting Corporation and withdraw the visas and accreditation of its journalists.

The Russian Government’s budget has shifted from surplus into deficit because of Vladimir Putin’s invasion of Ukraine.

The Finance Ministry had forecast a budget surplus of 1% of GDP — 1.3tn roubles ($20bn) — for 2022. It has revised this to a deficit of at least 1.6tn ($24.7bn) roubles, including payouts to counter the effect of international sanctions.

The European Commission has proposed another €9bn ($9.46bn) in European Union loans to Ukraine, and “Rebuild Ukraine” grants and loans modelled on the EU’s recovery fund.

The International Monetary Fund estimates that Ukraine needs about $5bn each month for basic operations.

The EU has already provided €4.1bn ($4.31bn) in economic and military aid to Ukraine since the Russia invasion.

Grateful for the support package for 🇺🇦 announced today by @vonderleyen: a new € 9 billion macro-financial aid program and a 🇺🇦 Recovery Platform. Such support will help 🇺🇦 win the war, overcome the consequences of RF's aggression & accelerate the movement towards #EU membership

Russian authorities have effectively closed Google operations in the country.

The officials seized Google Russia’s bank account, leading the Russian subsidiary to declare its intention to file for bankruptcy.

Authorities have put pressure on Google for months to delete content and to lift YouTube’s restrictions on some Russian media.

Sgt. Vadmy Shishimarin, 21, has pleaded guilty in the first war crimes trial of a Russian soldier over the killing of Ukrainian civilians.

The Moscow Times reports that four more military registration and enlistment offices in Russia have been burnt to the ground in the past 10 days.

More than 10 offices have been attacked with Molotov cocktails since the start of the invasion of Ukraine.

No perpetrators have been identified. Some analysts have speculated the attackers are showing resistance to any conscription for Vladimir Putin’s war.

Russian forces fired rocket launchers at a column of civilians in the Kherson region of southern Ukraine, killing at least three people and wounding several others, according to Ihor Iosipenko, a member of Kherson’s Regional Council.

He said the convoy of about 100 cars was driving from the city of Kryvyi Rih to the town of Beryslav.

Human Rights Watch says Russian troops who occupied areas in northern Ukraine, including around Kyiv, carried out summary executions, torture, and other grave abuses that are “apparent war crimes”.

HRW said it had investigated 22 summary executions, nine other unlawful killings, six enforced disappearances, and seven cases of torture in 17 villages and small towns during a visit to the formerly-occupied areas in April. Staff interviewed 65 people, including former detainees, torture survivors, families of victims, and other witnesses, and also examined videos and physical evidence at the locations.

The numerous atrocities by Russian forces occupying parts of northeastern Ukraine early in the war are abhorrent, unlawful, and cruel. These abuses against civilians are evident war crimes that should be promptly and impartially investigated and appropriately prosecuted.

The Ukraine General Staff estimates that about 28,300 Russian troops have been killed in Vladimir Putin’s invasion, including 400 in the past day.

The General Staff claims widespread destruction of Russian armor, warplanes, helicopters, ships, and weapons, in line with UK military intelligence’s asssessment that Moscow has lost about 1/3 of its invasion force.

These are the indicative estimates of Russia’s combat losses as of May 18, according to the Armed Forces of Ukraine. pic.twitter.com/EM0NQ2MRrk

Another sign that Russia is setting up show trials of surrendered Ukraianian fighters from the Azovstal steel works in Mariupol….

The Defense Ministry says it has been requested by the “investigative committee” to provide information on “the illegal actions of Ukrainian armed formations related to the use of civilian objects for military purposes”.

The Ministry asserts that “the Azov Battalion used the buildings of kindergartens and schools to equip barracks” and that troops of the Aidar Battalion equipped “firing positions in places not intended for this, creating a real danger to the civilian population”. It claims that in the Dnepropetrovsk region, Ukrainian forces set up military operations in hospitals and that “the staff and patients of medical facilities are being held as human shields”.

No evidence is provided for any of the allegations.

Denis Pushilin, the head of the Russian proxy “Donetsk People’s Republic” said a court will decide the fate of the Azovstal defenders.

The Ministry claimed the surrender of 959 fighters since Monday, including 694 in the past 24 hours.

It said only 80 of those who surrender were wounded, with 51 taken to hospital. The number is far lower than the total of injured — more than 600 — given by commanders inside Azovstal.

Russian forces have launched two missiles at Dnipro in east-central Ukraine, according to a regional military official.

A woman was injured by the wreckage of a missile downed by Ukrainian air defense units.

ORIGINAL ENTRY: Surrendering Ukrainian fighters from the Azovstal steel works, in the port city of Mariupol in southern Ukraine, will face interrogation and possible show trials in Russia.

Another seven busloads of defenders were taken to a former penal colony in the Russian-occupied town of Olenivka in eastern Ukraine on Tuesday. The “Russian investigative committee” will question them.

The Zelenskiy Government had hoped to exchange the fighters for Russian POWs, but Moscow signalled its rejections by saying the interrogations were into “crimes committed by the Ukrainian regime against the civilian population in south-east Ukraine”.

Some officials spoke of trials, and others went farther with reference to executions. In the Duma, Russia’s lower house of Parliament, said they will pass law classifying the fighters as “terrorists”.

After weeks of protracted negotiations, the first wave of transfers took 53 seriously-wounded soldiers taken to a hospital in the Russian-occupied town of Novoazovsk. Another 211 were transported to Olenivka, held by a Russian proxy group.

It is unclear how many defenders still remain in Azovstal.

The Kremlin is likely to use the Azovstal fighters to push propaganda that the Azov Regiment, a central element in Mariupol’s resistance, is made up of “Nazis” and far-right extremists.

It may also hope to pressure Kyiv into suspending trials of Russian troops for mass killings of Ukrainian civilians during the Russian occupation of northern Ukraine in February and March.

The first war crimes trial begins in Kyiv on Wednesday, with Sgt. Vadym Shishimarin, 21, a commander in a Russian tank division, charged with the killing of an unarmed 62-year-old man in northeastern Ukraine.

Prosecutors said Shishimarin’s convoy came under attack in the Sumy region in northern Ukraine. As he and four other soldiers fled in a stolen car, they encountered the victim on a bicycle near the village of Shupakhivka.

The indictment claims, “One of the soldiers ordered the accused to kill the civilian so that he would not denounce them.” Shishimarin fired a Kalashnikov assault rifle from the window of the car and “the man died instantly, a few dozen meters from his home”.

In a video after his arrest, Shishimarin said, “I was ordered to shoot, I shot him once. He fell and we continued our journey.”

Two other cases are due in court within days. One is the in absentia trial of Mikhail Romanov for rape and murder. He is accused of breaking into a house in March in a village near Kyiv, killing a man and then repeatedly raping his wife while “threatening her and her underage child with violence and weapons”.

The office of Ukraine’s Prosecutor General has opened more than 11,000 cases and says it has more than 40 suspects.

On Tuesday, the International Criminal Court sent a 42-member team to Ukraine to investigate alleged Russian war crimes, the largest deployment in the ICC’s history.

The US State Department announced the creation of a new unit, the Conflict Observatory, to “capture, analyze, and make widely available evidence of Russia-perpetrated war crimes and other atrocities in Ukraine”.