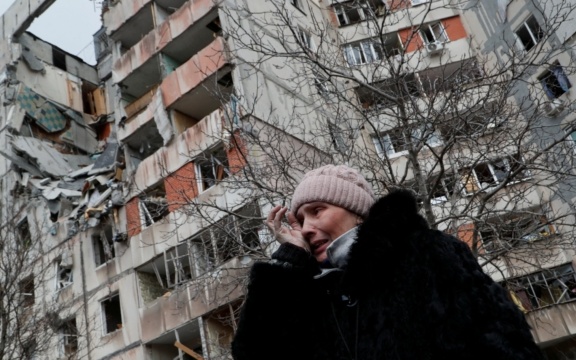 A woman stands in front of an apartment block destroyed by Russian shelling of besieged Mariupol in southern Ukraine, March 17, 2022 (Alexander Ermochenko/Reuters)

I joined Turkey’s TRT World on Saturday to analyze the latest military and economic developments in Vladimir Putin’s War on Ukraine — from the surrender of Ukrainian forces at Mariupol, the port city in southern Ukraine, to Russia’s cutoff of gas to Finland.

I set the 12-week defense of Mariupol in context, tying up Putin’s military as Russian forces failed in their initial objectives and then turned to a struggling offensive in eastern Ukraine.

It’s a victory Russia will want to claim, but it’s a hollow victory. In the wider context, Mariupol is a sign of resistance in defeating Vladimir Putin’s hope of conquering most of Ukraine.

Then I discuss Russia’s threat to Finland, spurring by Helsinki’s application for NATO membership, and preparations by the Finns — and others — to deal with any disruption of Russian energy supplies.