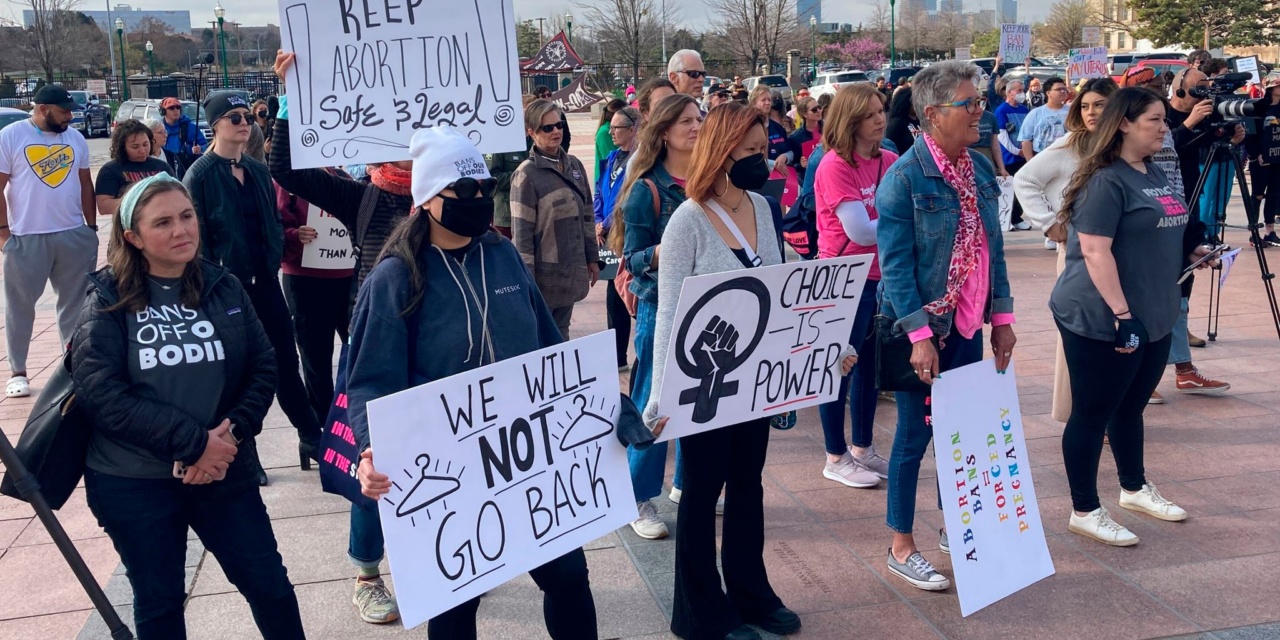 A protest for abortion rights outside the Oklahoma State Capitol, April 5, 2022 (Sky News)

Oklahoma has banned almost all abortions starting at fertilization, in the US’s strictest law — so far — over the procedure.

The Oklahoman legislature adopted a bill, by a 73-16 vote, allowing private individuals to sue abortion providers and anyone who “aids or abets” an abortion. It is expected to be signed by Republican Gov. Kevin Stitt, who has pledged to make Oklahoma the most anti-abortion US state.

Those who are convicted under the law, including doctors and nurses, face up to 10 years in prison and a $100,000 fine.

The measure is modeled on September’s law in neighboring Texas, which bans abortion after about six weeks and relies on civilian enforcement to avoid legal challenges, pending the imminent overturn of Roe v. Wade by the US Supreme Court.

The bill makes exceptions for cases of rape and incest, but only if the crimes have been reported to law enforcement.

After Texas’s near-ban last autumn, Texan crossed the state line for the procedure as clinics closed because of the likelihood of prosecutions. Planned Parenthood said its health centers in Oklahoma saw a 2,500% increase in the number of patients from Texas from September to December 2021. That increase was curbed earlier this year when Oklahoma also adopted a six-week limit.

With the Court’s decision expected in July, and a draft majority opinion by arch-conservative Justice Samuel Alito dismisses the right to abortion in Roe v. Wade, more than half of US states — all with Republican-controlled legislatures — have rushed to sharply restrict or ban abortions.

See also EA on BBC and Monocle 24: Can Abortion Rights Be Restored in US?

Republicans in several states are seeking to ban medication abortions. Others are seeking requirements for in-person visits for abortion pills. Some GOP legislators have even proposed bills compelling abortion clinics to provide inaccurate information that patients can reverse their abortions if they change their minds after taking the first pill.

A federal judge has blocked implementation of the Kentucky restrictions, but this would be nullified if the Supreme Court dismisses Roe v. Wade.

“This Draws the Worst of Us Together”

In Oklahoma, Democrat legislators pledged for an alternative to the abortion ban, with more funding for family planning services and to improve the lives of young Oklahomans living in poverty.

Rep. Trish Ranson said, “Legislation like this, on the surface, says that we are going to end abortion in our state. The manner in which it chooses to do so is punitive, it’s speculative and it draws the worst of us together.”

Rep. Cyndi Munson noted that many women, especially young girls who may be victims of incest, do not report sexual crimes to law enforcement:

Can you explain to me why you’re OK with a person carrying on a pregnancy after they have been raped or there has been instances of incest? You understand what incest is, correct? You are OK with that?

GOP Rep. Wendi Stearman, the Republican sponsor, was unmoved: “The child was not part of that decision.”