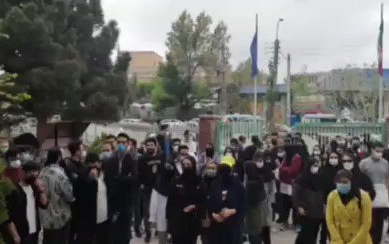 Claimed image of a student protest in Iran over restrictions on university campuses, April 2022

Students returned in April to campuses after a two-year break because of Coronavirus. They were greeted with measures such as stricter hijab rules on women.

Critics of the measures say they are designed to tighten the regime’s hold on universities, after the managed election of President Ebrahim Raisi last June.

The Supreme Leader effectively endorsed that view in a speech on “Jihad Clarification” to students last week.

On April 24, dozens of students at Amir Kabir University in Tehran risked disciplinary measures, holding a rally criticizing the restrictions and “Stone Age ideas”. They said the campus is now a “military base”, with security guards roaming on motorbikes to enforce measures.

A student summarized to an Iranian news site, “The imposition of these restrictive measures appears to be the policy of new university officials [after the] current government came to power.”

The demonstration was sparked by official warnings to students over their apparel. One was assailed over the length of her sleeves and socks, and another because officials thought her coat was too short.

A woman said of the new security procedures, “I can’t believe this is [happening] at the university because there were no such things before the Coronavirus.”

Video was posted online of an April 28 protest at the Tabriz University of Medical Sciences. The student union at Tehran University challenged “frequent disciplinary measures that violated the dignity of students”.

Alireza Moini, an official at Amir Kabir University, blamed protests on foreign Persian-language media outlets, He said, providing no evidence, that they encouraged students to break the law.

The restrictions appear to be part of a tougher regime approach to the circulation of ideas at universities. In January, three leading professor were dismissed from Tehran universities.