EA on BBC and Radio FM4: The Supreme Court’s Threat to A Woman’s Right to Choose 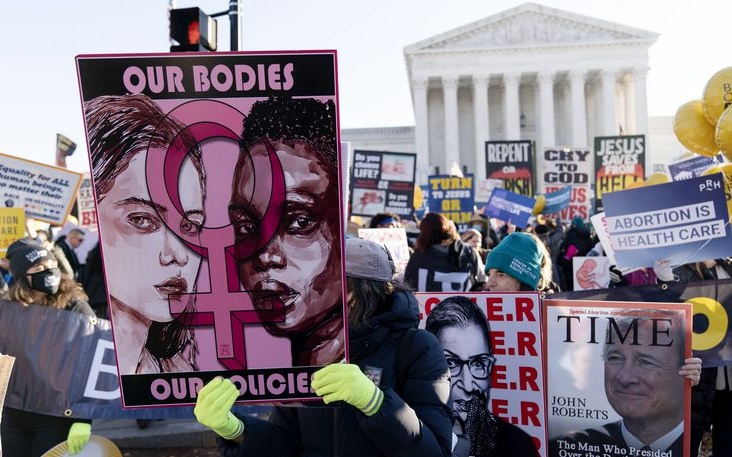 Demonstrators outside the US Supreme Court as it considers restrictions on abortions, December 1, 2021 (Jose Luis Magana/AP)

I also spoke with Austria’s Radio FM4 on Tuesday about the damaging significance of the draft majority Supreme Court opinion overturning Roe v. Wade, with the prospect of state bans or severe restrictions on abortion.

This is a political rather than legal decision because it hands the matter to state legislatures.

Eighteen states have or are about to have “trigger laws”, which means that on the day Roe v. Wade is overturned, they will immediately ban abortion.

Not within months. Not within weeks. But on the day Roe v. Wade is overturned.

I look at the politics around Alito’s draft and its dubious legal reasoning, threatening not just abortion rights but rights in general. And I explain the damage of a return to the pre-1973 US, with women having to travel to other states for the procedure — and, if they did not have the means to do so, risking illegal “backstreet” abortions.

Alito says, “There is no right to abortion in the Constitution”, which was written in the 18th century.

But for decades, the Court has said there are unenumerated rights — for example, to contraception or to same-sex marriage — which aren’t specifically named but are part of our personal rights or right to privacy under the 14th Amendment.

Alito has swept that away.

What the Court has effectively done here is stepped aside legally and said, “We’ll hand this over to the politicians,” which only makes the division over the issue worse.