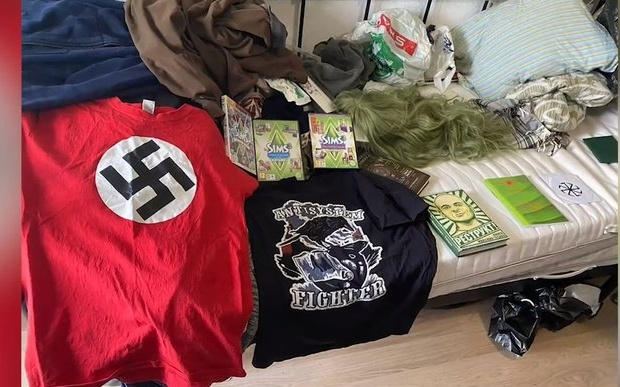 In one of their more unusual propaganda campaigns, Moscow’s officials have claimed that a pro-Ukraine Russian group plotted to assassinate Russian State TV polemicist Vladimir Solovyov.

The officials proclaimed that the plan had been foiled by the FSB intelligence service. The Investigative Committee said six men planned to blow up Solovyov’s car.

They have resorted to terror! To preparing the murders of our journalists. We know by name the curators of Western secret services, primarily, of course, from the CIA, who work with the security agencies of Ukraine.

Apparently, they give such advice. So much for their attitude towards the rights of journalists…[and] human rights in general.

A statement on State TV channels declared that a raid — with video of FSB officers seizing the suspects and extracting “confessions” — had confiscated an improvised explosive device, eight Molotov cocktails, six Makarov pistols, a sawed-off shot gun, a grenade, more than 1,000 rounds of ammunition, drugs, forged Ukrainian passports, and “nationalist literature and paraphernalia”.

However, the officials may have undermined their presentation with further images of the group’s “Ukrainian neo-Nazi starter pack”.

Among the items were a green wig, a photograph of Adolf Hitler, a flag with a swastika, and three expansion packs for “The Sims 3” computer game.

And in these pictures from the raid we have a "Ukrainian neo-Nazi starter pack" courtesy of the FSB pic.twitter.com/5FSvpze1lG

Undeterred by the absurdity of the campaign, Solovyov — renowned for his over-the-top diatribes about Ukraine President Volodymyr Zelensky and Ukrainians in general — declared that the President ordered his assassination because he “once tried to get a job on Russian state TV but wasn’t talented enough”.

This just gets better and better

On his show tonight, Solovyov says Zelensky ordered his assassination because he "once tried to get a job on Russian state TV but wasn't talented enough" (with subs) pic.twitter.com/ozXP81egMD

Solovyov, sanctioned by the European Union for spreading propaganda, told RIA Novosti, “I think that it’s directly related to Zelenskiy, because Zelenskiy directly threatened [me], that is, he’s mentioned my surname more than once.”

He did not discuss the relevance of the green wig or Sims 3.

Ukraine’s security service SBU said it “has no plans to assassinate V. Solovyov” and “does not intend to seriously comment on the new fantasies of the Russian intelligence services, who are simply inventing achievements for a Russian audience”.

It added that Solovyov is “an ordinary propagandist — the Russian equivalent of Goebbels — who will be held accountable for his crimes in international courts after Ukraine’s victory”.

🧵Hilarity continues. FSB released a video of documents they fabricated to frame Ukraine which contain the phrase "Signature Illegible" in place of where they were to place an illegible signature. pic.twitter.com/JoJRlKRZxi