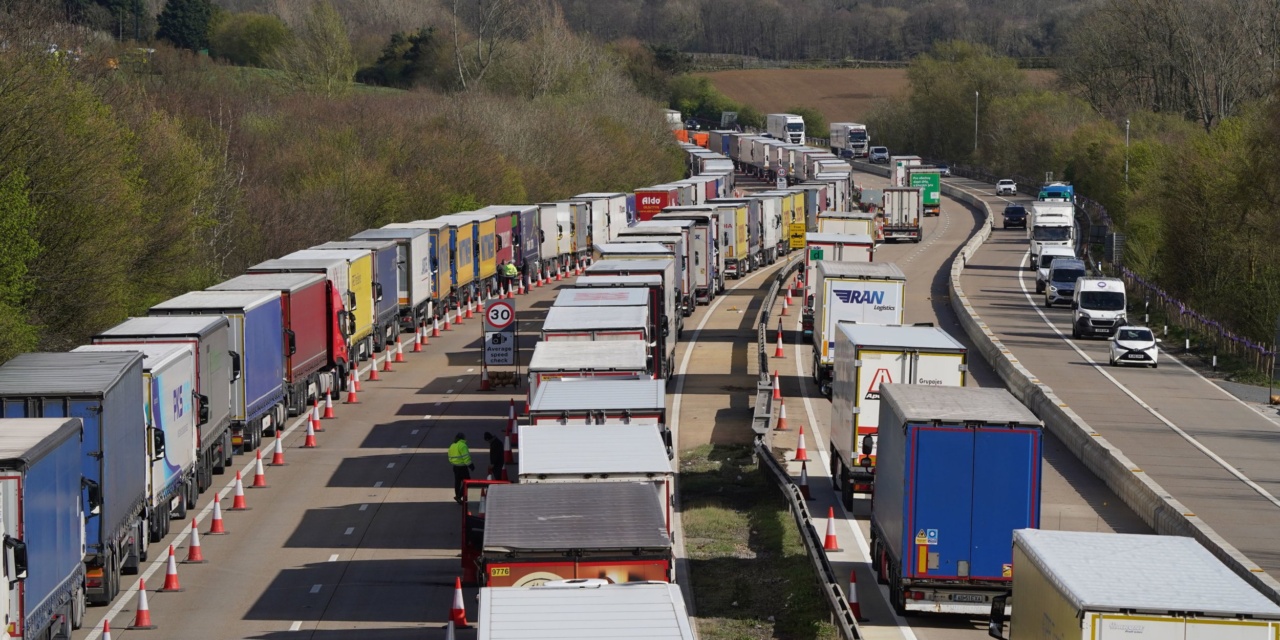 Lorries queue for more than 24 hours near Ashford in Kent last week amid delays at the port of Dover, UK, April 7, 2022 (Gareth Fuller/PA Wire)

Published in cooperation with the Centre for Brexit Studies:

Last Sunday, UK hauliers warned that some lorry drivers are now waiting more than 24 hours to cross into Europe. They noted that fresh produce is losing quality and value, and called for a priority lane for the lorries.

Transport Secretary George Eustice waved away the warning. He said a priority lane was unnecessary and proclaimed that the queues were diminishing. He blamed the start of Easter holidays for a “sharp increase in traffic”.

Eustice did not explain how many of the lorry drivers had built up the backlog by going on vacation more than a week before Easter Sunday.

The minister did refer to another contributing factor: the suspension of routes of P&O Ferries.

But he did not mention why that suspension had occurred. Freed by Brexit from European regulations preventing “fire and rehire”, P&O abruptly dismissed 800 employees by video message and replaced them with low-wage agency staff.

On Wednesday, another P&O ferry was detained at Dover after failing mandatory safety checks.

For months, as the economic downturn from Brexit has taken its chaotic shape, the UK Government has sought salvation in a blame offensive. Blame The Pandemic. Blame France. Blame Russia’s Ukraine Invasion. Blame Easter.

But as UK inflation set another 30-year record in March, reaching 7%; as real wages fell 2%, the greatest drop in nine years; as April begins with a 50% hike in energy prices, and as taxes are increasing: who else can be blamed to distract from Brexit’s decline by a thousand cuts?

As Eustice offered his diversionary excuses, analysts noted a core issue behind the delays at Dover and other ports. The IT system supporting the post-Brexit trade portal was not working. The Government’s vaunted solution for making the movement of goods easier, a barcode proving that a customs declaration had been made, was yet another of its myths.

Logistics firm DFDS confirmed that ferries are sailing without being fully laden because lorries cannot clear customs in time, as the head of the British Ports Association, Richard Ballantyne, summarized that delays are linked to “Brexit scenarios”. Hauliers said that, amid an international shortage, drivers are hesitant about taking on jobs for fear of being stuck when they try to return from the UK.

“We cannot keep seeing this,” said Rod McKenzie, head of policy at the Road Haulage Association. “It is expensive and damaging for the economy and reputation of the UK. It is time to take decisive action and deal with this long-term problem.”

Michelle Dale of accountancy firm UHY Hacker Young said bluntly, “Businesses are not getting enough support from the Government to navigate the post-Brexit trading minefield. A lot of SMEs [small and medium enterprises] can’t afford professional advice to cope with Brexit-related red tape. Many are likely to have decided trading with the EU is not worth the cost.”

Even an apparent consolation — the UK unemployment returning to its pre-pandemic rate of 3.9% — had caveats. Overall employment is more than 500,000 workers lower than in March 2020. The drop in unemployment is due not to a surging job market, but a rise among the “inactive”: there are now more than 2.3 million workers on long-term sick leave, and 1.7 million looking after family or retired.

It is utopian to expect the Government, having created a minister to hail yet-to-be-seen “Brexit Opportunities”, to acknowledge that there is no way up and no way out. Still, one might hope for a measure of responsibility in noting difficulties and complications, if only so producers, consumers, managers, and workers can make informed decisions.

But there is no responsibility in an administration which said it would break international law to revise Brexit, in a Prime Minister who broke the law — and lied to Parliament about breaking the law — for wine, cheese, and birthday cake in the time of Coronavirus, or in a Chancellor who maintained permanent residency in the US while his non-domiciled wife escaped UK taxes.

So the tactic must be Nothing To See Here, Move Along — and not just from ministers.

As farmers speak of rotting crops because border rules have restricted their European markets, the BBC cut a reference to Brexit, made by the president of the National Farm Union Scotland, as part of a “perfect storm” including potential food shortages. The national broadcaster also avoided any mention of Brexit, including custom checks, in coverage of the queues at Dover.

Yet there was one genuine good-news Brexit story this week. The supply of medicines from Great Britain to Northern Ireland has been guaranteed.

The saviour? The European Parliament and European Council — protecting Northern Ireland, still inside the EU’s economic and regulatory system, from the changes in a Great Britain which is not.