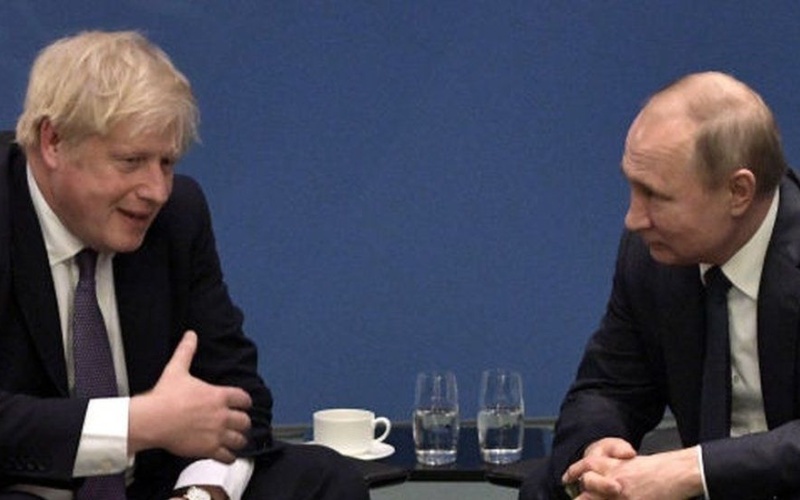 Putin gave Johnson a helping hand with Russia’s support for the Leave campaign in the 2016 Brexit referendum. More than 5 1/2 years later, the Russian leader is unlikely to have been thinking of Boris when he launched Moscow’s invasion of Ukraine; however, the effect has been just as significant for the wanna-be Churchill in 10 Downing Street.

On the last day of January, Johnson was on his way out because of the Downing Street parties that defied Coronavirus restrictions. Sue Gray, the civil servant leading the inquiry into Partygate, issued an update. that 12 events were being investigated by the Metropolitan Police for potential “flagrant” violations, with participants liable to fines. A rattled Prime Minister refused to take personal responsibility and tried to smear opposition leader Keir Starmer by falsely linking him to the paedophile Jimmy Savile.

With some Tory MPs already filing letters of no confidence, it appeared that Grey’s impending report would be the death knell for Johnson’s Premiership — especially after the Met reopened consideration of a 13th party following publication of a damning photograph of the Prime Minister and colleagues.

Johnson tried to save off his reckoning with the lifting of Coronavirus measures in England, but the bigger announcement came 1,800 miles away in Moscow. On 21 February, Putin paraded his Ministers and senior officials in a staged performance to recognize the “independence” of the Russian-proxy areas in eastern Ukraine.

Two days later, at Prime Minister’s Question Time, Partygate had disappeared. Johnson’s messages were far from the clarity of his icon’s “We will fight them on the beaches”. He was confused and confusing over sanctions, Russian “oligarchs”, and action against Moscow’s disinformation.

But he was in the clear: the following day, Vladimir Putin launched his war, not only in the east of Ukraine but across the country.

Brexit was not just off the UK’s front pages. It almost disappeared in much of the press.

On 26 February, The Times wrung its hands, “Will the Permacrisis Ever End? Brexit started it, the pandemic exacerbated it, war in Ukraine is adding to the sense of dread.” Then, for the next two weeks, it said nothing about Brexit and any crisis, permanent or temporary — apart from references in theatre reviews about Animal Farm and Bloody Difficult Women, “a stilted drama about Gina Miller, Theresa May and Brexit”.

The Daily Mail, the ardent foe of the European Union, was silent until March 7, when it stumbled into a Ukraine story which undermined its Brexiteer credentials: “Aid for Ukraine is Being Blocked at UK Borders Due to Post-Brexit Red Tape on Shipments into EU, Charities Warn”. The Telegraph did maintain some coverage, mainly to campaign for the invocation of Article 16 to suspend the Northern Ireland Protocol.

Of course, the reality of Brexit hadn’t evaporated. The Office of National Statistics confirmed that UK exports to the EU fell in 2021 by 12% — £20 billion — compared with 2018, the last period of stable trade. Exports of cars fell by 25%, vegetables by 40%, and clothing by 60%. A survey of more than 1,000 businesses, conducted by the British Chambers of Commerce, cited rising costs, increased paperwork and delays, and competitive disadvantage: 71% of exporters said they had not been able to increase sales.

Those figures put the Johnson Government’s trumpeted good-news story into perspective: a trade deal with New Zealand is projected — at best — to boost Northern Ireland’s economy by 0.01%. In a downturn scenario, the Northern Irish output will fall by 0.06%.

Meanwhile, UK farmers are facing losses from the removal of EU-style subsidies. Arable farmer Andrew Ward, a Conservative voter, summarized, ”I will not be doing [that] next time, that’s for sure. Every sector in agriculture is heading into a desperate situation.”

Health and safety standards may be dismantled, as the Government considers permission for imported food which has been treated with pesticides, in contrast to the European Union’s ban.

And London’s combination of stonewalling and inaction over Northern Ireland continues, as the June date for post-Brexit border controls portends further damage to trade.

Of course, reality is one matter and the Johnson Government’s fantastic rewriting of it is another.

Last month Jacob Rees-Mogg — who has avoid Brexit’s damage by keeping much of his investments in Irish funds — was given the Orwellian post of Minister for Brexit Opportunities and Government Efficiency.

He immediately fulfilled his portfolio with alternative “facts”: “I think Brexit has been extremely beneficial for the country. I think the evidence that Brexit has caused trade drops is few and far between.” Any difficulties were due to “a global trade issue” and “the problems of Covid”.

Johnson added his own bravado with the proclamation that he had commanded Rees-Mogg to find “1,000 regulations we want to get rid of”.

Since then, Rees-Mogg’s only “opportunity” has been the consideration of a UK return to an imperial system for weights and measures. The 1,000 regulations have not been seen.

Never mind. For now, for this Government, it’s Ukraine all day, every day.

While Johnson poses that the UK is leading the world in its support for Kyiv, his Home Office has only approved 300 visas — after an initial plan for 50 — as the number of Ukrainian refugees passes 2 million. The Prime Minister’s vaunted “six-point plan” was no more than vague assertions such as humanitarian aid, backing of President Zelenskiy, and — cue the irony — helping refugees.

Never mind. Johnson’s sanctuary has always been in sweeping rhetoric. His refuge is now in appearances abroad, such as the recent trip to Poland, and in hosting fellow leaders such as Mark Rutte of The Netherlands, Canada’s Justin Trudeau, and the Vinograd Group of the Czech Republic, Hungary, Poland, and Slovakia.

Johnson proclaims, “Putin will fall” to ensure that he does not leave 10 Downing Street in failure. And with some, it is working. The journalist Oz Katerji wrote on Monday:

As someone who has been a fierce critic of Boris Johnson for a long time, it must be said, as far as Ukrainians I speak to are concerned, he is the best ally Ukraine has. I honestly take no pleasure in reporting this but it’s indisputably true. Come here & ask people yourself.

In January, Downing Street proclaimed Operation Red Meat to save Johnson from Partygate. A week later, it was Operation Big Dog.

Turns out all he needed for salvation was the killing of Ukrainians in “Special Military Operation: Vladimir Putin”.