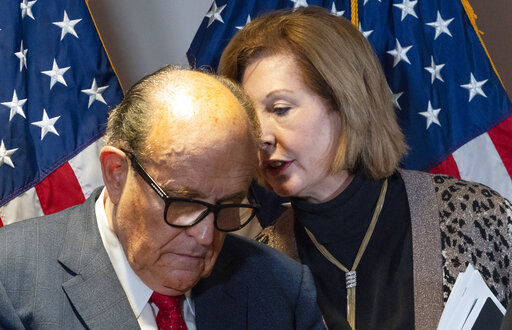 Politico has published e-mails revealing the extent of the Trump camp’s effort to seize voting machines.

A Michigan prosecutor has confirmed that Donald Trump’s attorney Rudy Giuliani and other Trump legal advisors asked him to seize voting machines after the November 2020 election.

Antrim County prosecutor James Rossiter, a Republican, said Giuliani and several colleagues asked for the machines to be handed over to the Trump team.

On Election Night, human error led to a brief misreporting of reports, wrongly giving Joe Biden a 3,000-vote margin over Trump. The mistake was quickly caught and corrected by election supervisors, with Trmp carrying the county by 3,000 votes.

Rossiter declined the request in the phone call, which was on or about November 20:

I said, “I can’t just say: ‘Give them here.’ We don’t have that magical power to just demand things as prosecutors. You need probable cause.”

He added that even if he had probable cause, he would not have released the machines to outsiders, including a party with an interest in the matter.

Rossiter said, “I never expected in my life I’d get a call like this.”

Trump’s team later got access to machines through a lawsuit by local realtor William Bailey, in a case overseen by a judge who donated to the Trump campaign.

A purported “forensic report” claimed the machines were “intentionally and purposefully designed” to manipulate votes. Experts said that assertion is false and the report is critically flawed.

The report was produced by a team including Phil Waldron, the retired army colonel who advised the Trump team that troops could seize ballots. Its unsupported claims were included in the draft executive order considered by Trump, just before the January 6 Capitol Attack.

Donald Trump considered seizure of voting machines in December 2020 to prevent the victory of Joe Biden.

Trump rejected the proposal by his advisors of an executive order (see Original Entry below) for action by the Defense Department. However, he directed his attorney, Rudy Giuliani, to call the Department of Homeland Security and see if they could take control of voting machines in key states won by Biden, according to “three people familiar with the matter”.

Homeland Security’s Acting Deputy Secretary Kenneth Cuccinelli told Giuliani that he did not have the authority to impound or audit the machines.

The call followed Trump’s suggestion in mid- to late November to Attorney General William Barr that the Justice Department could seize the machines. Barr immediately rejected the proposal.

The idea of seizure by the Pentagon initially came from a retired Army colonel, Phil Waldron. He proposed action by the Pentagon to Michael Flynn, Trump’s former National Security Advisor, with whom he served in the Defense Intelligence Agency.

The proposal was then considered in meetings that included Trump, Flynn, Waldron, and Trump’s lawyers Giuliani and Sidney Powell. They accompanied failed initiatives such as state legislatures replacing Biden electors with Trump’s, and the ultimate proposal for Vice President Mike Pence to block Congressional certification of Biden’s Electoral College victory, sending the decision to the House where Trump was expected to triumph.

Giuliani advised Trump that the Pentagon could only be used if there was clear evidence of foreign interference in the election. Powell insisted she had the evidence, but Giuliani prevailed. Soon after the Oval Office meeting, Waldron amended the draft executive order so Homeland Security could seize the machines.

The December 16 order also would have appointed a special counsel to investigate the election. It was never issued; however, it corresponded with White House meetings exploring how to keep Trump in office and block the confirmation and inauguration of President-elect Joe Biden.

Trump’s lawyer Sidney Powell made proposals similar to those in the order. Two days after the document circulated, she attended a meeting including Trump, disgraced former National Security Advisor Michael Flynn, and former Trump Administration lawyer Emily Newman. Powell urged Trump to seize the voting machines and appoint her as the special counsel.

Witnesses said the meeting dissolved into shouting, with even Trump’s attorney Rudy Giuliani balking at the appointment of Powell. While Flynn was urging Trump to “bring in the military”, impose martial law, and “rerun” the election, other Trump advisors — reportedly including White House Counsel Pat Cipollone and Chief of Staff Mark Meadows— dismantled Powell’s assertions. Afterwards, Cipollone told Trump there was no constitutional authority to name the conspiracy theorist as special counsel.

Powell and Giuliani are facing disbarment and defamation lawsuits filed by Dominion.