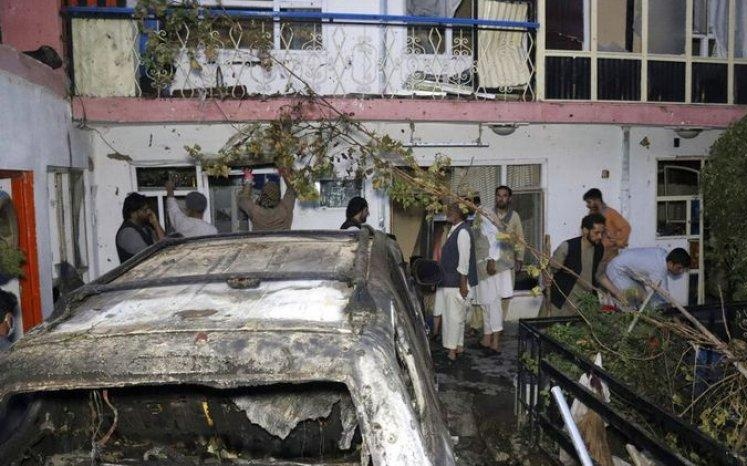 Through a Freedom of Information lawsuit, the New York Times has obtained footage of the August 2021 US drone strikes that killed 10 members of a family in Kabul, Afghanistan.

The Pentagon will not punish personnel involved in the August 29 drone strikes that killed 10 members of a family in Afghanistan’s capital Kabul.

The Pentagon has rarely disciplined troops involved in strikes killing civilians in Afghanistan and elsewhere. A rare exception was the punishment of at least 12 personnel over the October 2015 bombing of a Médecins Sans Frontières hospital in Kunduz, Afghanistan; however, no criminal charges were filed.

Surviving members of the Ahmadi family, who lost 10 relatives in a US drone strike, say they are hoping for compensation from the American Government and assistance to resettle in the US or another safe country.

You can see the situation in Afghanistan is not good. Whether in America or another country, we want peace and comfort for our remaining years. Everyone makes mistakes. The Americans cannot bring back our loved ones, but they can take us out of here.

Zemarai’s brother Emal finds a small consolation in the Pentagon’s admission of its error in bombing the family’s Toyota, slaying Zemarai and several of his children, “The Americans kept emphasizing they killed an ISIS-K terrorist. Now we are happy they have acknowledged their mistake and confirmed that they killed innocent people.”

But he notes, “We didn’t have money to bury our relatives. We had to borrow the funds.”

Emal asks for justice, “The US Government must punish those who launched the drone strike. They knew and saw there were children on the ground. Can anyone bring them back?”

Gen. Kenneth McKenzie, the head of US Central Command said on Friday that “we recognize the obligation” for reparations to the family.

But so far no US official has been in touch with the Ahmadis.

“They should have contacted us and at least asked us about our situation,” Emal says.

ORIGINAL ENTRY, SEPT 18: The US military acknowledges that it killed 10 civilians, including seven children, in a drone strike in Kabul on August 29.

The strike came two days before the final American withdrawal from the country and three days after a suicide bombing by Islamic State Khorasan (ISIS-K) killed at least 169 Afghans and 13 US troops outside Hamid Karzai International Airport.

Soon after the drone strike, the Pentagon said it had slain ISIS-K members involved in the planning of attacks, with explosives in the trunk of the white Toyota Corolla targeted by the drone in the courtyard of a Kabul building. Gen. Mark Milley, the chairman of the Joint Chiefs of Staff, praised a “righteous” operation.

But residents and activists said the dead were members of the Ahmadi and Nejrabi families, which had no connection with ISIS-K. Instead, they were hoping to be evacuated as the Taliban took over Kabul, and had packed their belongings in the expectation of the move.

Zemarai Ahmadi, the driver of the Toyota, was a longtime worker for a US aid group, and another victims worked for a British NGO. A subsequent New York Times investigation of available video evidence, with interviews with Ahmadi’s co-workers and surviving family members, cast further doubt on the US military’s narrative.

On Friday, the Pentagon said US personnel had followed the vehicle as it returned to the residential building. However, the “explosives” in the Toyota’s trunk were probably water bottles, with the drone strike likely detonating a propane or gas tank.

Senior Defense Department officials finally conceded Zemari Ahmadi had no involvement with ISIS-K. Because of a brief interaction with people in what the military believed was an ISIS-K safe house, his vehicle had been tracked for the next eight hours until it was parked at the family home.

Revising Claim of A “Righteous” Strike

Gen. Kenneth McKenzie, the head of US Central Command, said on Friday, “I offer my profound condolences to the family and friends of those who were killed.”

In a partial defense of the operation, McKenzie insisted that “we did not have the luxury to develop pattern of life” during the tracking of Ahmadi. He said the Pentagon will work with families on reparation payments: “We recognize the obligation.”

Other US officials defended their initial assessment that Ahmadi, whose identity they did not know, was suspicious because of his visit to the suspected ISIS-K safe house, described as a hub of planning. They said the white Toyota Corolla was the same model that was suspected of involvement in an imminent bomb plot, and that Ahmadi was monitored as he loaded the trunk with what was thought to be explosives.

The US personnel subsequently reviewed imagery that three children coming out to greet Ahmadi as he reached the house, one of them getting into the driver’s seat of the Toyota.

Just after the attack, Zemarai Ahmadi’s brother Emal explained that as Zamarai returned, he asked one of his sons to park the car in the courtyard of the two-floor house. He wanted his older sons to practice driving before life in the US.

Several children, including two-year-old Malika, got into the car for the ride from the street to the courtyard garden.

“When the car had come to a stop, that’s when the rocket hit,” Emal said.

Defense Secretary Lloyd Austin said on Friday, “We now know that there was no connection between Mr. Ahmadi and ISIS-Khorasan, that his activities on that day were completely harmless and not at all related to the imminent threat we believed we faced, and that Mr. Ahmadi was just as innocent a victim as were the others tragically killed.”

Milley revised his claim of a “righteous” strike:

In a dynamic high-threat environment, the commanders on the ground had appropriate authority and had reasonable certainty that the target was valid, but after deeper post-strike analysis, our conclusion is that innocent civilians were killed.

This is a horrible tragedy of war and it’s heart-wrenching and we are committed to being fully transparent about this incident.