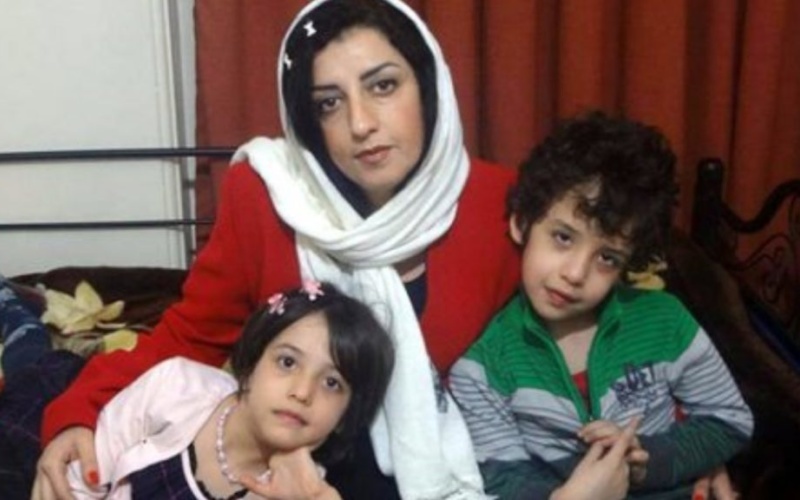 Human rights activist and political prisoner Narges Mohammadi has written of the new 8-year, 2-month prison sentence imposed on her.

In a letter dated January 24 and written in Qarchak Prison, Mohammadi said the punishment was handed down after a “five-minute trial” and “without the presence of my lawyer”.

She said the new charges were opened after she spent 64 days in solitary confinement in Tehran’s Evin Prison, in a ward controlled by the Intelligence Ministry. On December 24, without prior notice, she was summoned to court to present a final defense. She was denied access, banned from receiving visitors, and prevented from making phone calls until the “trial” was held in Branch 26 of the Revolutionary Court in Tehran.

Mohammadi said she had “no intention of appealing or surrendering to a sentence that I do not recognize”.

The sentence also includes 74 lashes and bans from living in Tehran, membership in political and social organizations, and use of social media or phone calls.

I have a question for the heads of the judicial and executive branches: Is my Nobel Peace Prize nomination — by Amnesty International’s branch in Norway for peaceful human rights activities — an act against national security that deserves 8 years in prison and 74 lashes?

I call on peace-seeking and humanitarian organizations of the world, including Amnesty International, as well as the European Parliament, not to discount or dismiss the blatant suppression of peace-seekers inside and outside Iran, which is clearly the policy of the Islamic Republic.

The European Union has condemned the sentence “against the universal principles of human rights and the rule of law”.

ORIGINAL ENTRY, JAN 25: Iran’s prominent human rights activist and political prisoner Narges Mohammadi has been given another sentence of eight years and more than 70 lashes.

Mohammadi’s husband Taghi Rahmani announced the additional punishment, as well as a two-year ban on “communication”. He said that, as Mohammadi had not been able to contact family, he did not know any more details.

The activist was first arrested in 1998 for her defense of human rights, spending a year behind bars. She has been imprisoned most of the past 12 1/2 years, since the Iranian regime’s crackdown on mass protests over the disputed 2009 Presidential election. Her “crime” is her leading role in the Center for Defenders of Human Rights.

Mohammadi was detained in 2010 and released in July 2012 for health reasons. She was seized in May 2015 on new charges. A year later, she was handed a 16-year sentence for her CDHR membership, “assembly and collusion against national security”, and “propaganda against the state”.

She has continued to be a significant presence despite her imprisonment, issuing statements from behind bars or during brief periods of release. She was given an additional 30-month sentence after she organized a sit-in at Tehran’s Evin Prison to condemn the execution of wrestler Navid Afkari and the killing of hundreds of protesters by Iranian security forces in demonstrations in November 2019.

Released in November 2020, Mohammadi was rearrested on November 17 last year after she attended a vigil for Ebrahim Ketabdar, who was killed during the November 2019 protests.

Iran’s authorities have continued to repress pursuit of rights and justice through the long-term detention of activists, their lawyers, labor union leaders, students, journalists, and others.

Hadi Ghaemi of the Center for Human Rights in Iran summarizes, “Narges Mohammadi is only one of many individuals behind bars in Iran because of their peaceful dissent and the willingness of a judiciary to do the bidding of a brutal and unlawful security state.”

Iran Daily: “Her Children Have Not Seen Her For More Than 4 Years” — The Imprisonment of Narges Mohammadi