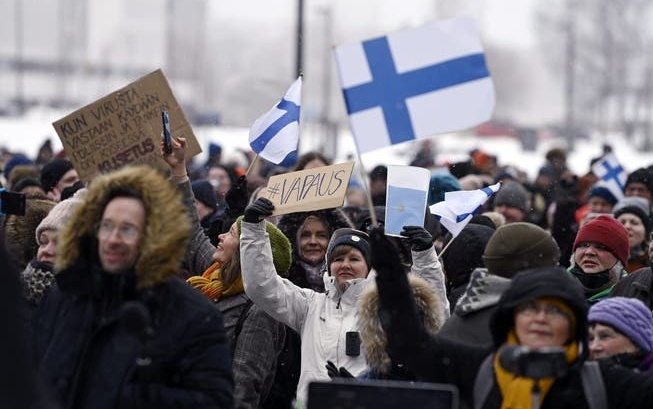 During the first wave of the Coronavirus pandemic, the Finns Party was an outlier amongst Europe’s radical right-wing populist parties. Its initial response to the Finnish government’s actions to contain the virus were unitary, consensual, and moderate.

However, as the pandemic has persisted, the party has found it more difficult to avoid becoming the vehicle to contest mainstream views on COVID-19.

So whereas the party initially only focused on the pandemic’s economic impact — arguing for welfare nationalism, budget discipline, and the protection of Finnish national sovereignty — now it has started to resist government measures to curb the rate of infection.

The party opposes the introduction of Digital COVID Certificates, claim their use equates to “mandatory vaccinations”. Parliamentary arguments followed those of party leadership candidate Ossi Tiihonen, whose COVID-focus campaign gained the support of an unexpectedly high 14% of members.

The perception that the Finns Party is at odds with scientific consensus or or is opposed to vaccination could put its regained legitimacy at risk, causing discontent among members. On the other hand, only about half of party supporters were willing to get vaccinated as of early 2021.

Thus the party’s leadership has adopted an ambivalent stance, saying “the Finns Party is not a corona party, and the party does not follow a specific corona line”. Former leader Jussi Halla-aho said in the party’s paper, “People do not agree [on COVID-19]…meaning it is impossible for the party to fulfil conflicting hopes and demands.”

The leadership has not sponsored vaccine scepticism, nor has the party officially supported non-compliance with government guidelines. Indeed, leader have gently encouraged party activists to trust experts and science, implicitly supporting the government’s strategy of obtaining herd immunity via vaccination. To put clear water between the party and the emerging anti-vaccine movement, the executive expelled MP Ano Turtiainen, who defied the leadership by refusing to wear a mask in Parliament.

But apart from the most extreme and conspicuous cases, the leadership has allowed its politicians and members to discuss the pandemic as they see fit.

During the first wave of infections in Finland, there were no large demonstrations against public health authorities’ restrictions and recommendations. Unlike in Germany, there was no pre-existing public discourse, movements, or platforms for the Finnish radical right to co-opt or to engage in protest.

Combined with the party’s initially pro-consensus stance, this largely discouraged Finns Party activists and supporters from participating in or sympathising with COVID-related protest actions.

During later waves, this changed. Individual party politicians and activists contradicted the consensual line on social media by questioning the motivations behind the vaccination campaign and by sharing disinformation. The party’s heightened oppositional rhetoric in Parliament has some similarities with claims made by Finland’s emerging online anti-vaccination movement. This has led other Parliamentary parties to accuse the Finns Party of flirting with COVID-denialism.

The situation is reminiscent of the late 2000s, when the Finns Party was first scrutinized and criticized for providing a platform to nativist online activists and movements, even as nativism became a mainstream, core element in the party’s ideology.

Waiting It Out May Backfire

The Finns Party’s leadership could attempt to pre-empt or at least slow down a hardening of rank-and-file views on COVID-19. However, disciplinary measures or stringent message discipline would cause bad blood within a fast-growing party. Some members could seek new political homes, such as in the emergent Power Belongs to the People movement.

It is uncertain how long COVID-19 will remain a political signifier and point of division in Finnish and world politics. So the Finns Party appears to have settled upon a strategy of wait and see, while leaving the door ajar to individuals who are stimulated by contesting the government over Covid-19.

But the longer this persists, the more difficult it will be for the Finns Party to avoid becoming – in former leader Jussi Halla-aho’s words – “a corona party”.