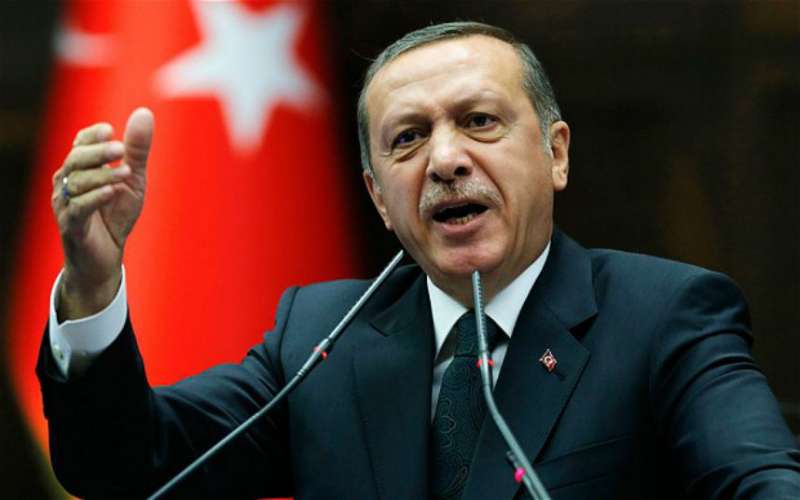 Turkish jets reportedly dropped leaflets over the city of Tal Rifaat in northern Syria on Friday: “To the civilians of Tal Rifaat, the city will be liberated from the terrorism of the PKK and PYD. We urge you to comply with our forces before it’s too late”.

Turkish President Recep Tayyip Erdoğan has redoubled his pledge of military actions against the Kurdish militia YPG in northern Syria. He told reporters in Istanbul on Friday:

The terrorists of the [Turkish Kurdish insurgency] PKK, YPG, and [Syrian Kurdistan Democratic Unionist Party] PYD are running wild in entire Syria, not only in the northern part. The leading supporters of them are the international coalition and the US. These groups are terrorizing with all kinds of weapons, ammunition and equipment they are given by them.

Erdoğan referred to Sunday’s killing of two Turkish police officers in the border town of Azaz in northwest Syria, and to cross-border shelling: “Our two policemen were recently martyred. Civilians are also being targeted from time to time. Our struggle against them will continue in a much more different way.”

Two Turkish officials said Ankara is preparing for military action against the YPG if talks with the US and Russia fail to curb the militia.

A “senior official” said, “It is essential that the areas, notably the Tel Rifaat region from which attacks are constantly carried out against us, are cleansed.”

The sources said Erdoğan will discuss the issue with President Joe Biden at the G20 summit in Rome at the end of October. They said the YPG must be pushed back at least 30 km (19 miles) from the border.

In a jab at Russia, they said Moscow’s forces and Iranian elements were in control of the areas, such as Tel Rifaat, from which the YPG was firing missiles at Turkish positions.

Soon after Erdoğan’s remarks on Friday, a Turkish military convoy was struck by an improvised explosive device in Idlib Province. Claims circulated that two troops were killed and five wounded.

Speculation connected the attack to Thursday’s arrest, by the Islamist bloc Hay’at Tahrir al-Sham, to an operative from the rival faction Ansar Abu Bakr al-Siddiq over the killing of Turkish soldiers.

#Syria: ground sources say there are between 5 & 7 casualties among Turkish soldiers, incl. some dead. The #TSK convoy was targeted tonight by a powerful IED in the N. #Idlib countryside. pic.twitter.com/w5dGNfL0El

State Department spokesman Ned Price told reporters on Tuesday, “We condemn the cross-border attack against our NATO ally Turkey. We express our condolences to the families of the Turkish national police officers who were killed in Syria.”

We underscore the importance of maintaining cease-fire lines, and halting cross-border attacks. It is crucial for all sides to maintain and to respect cease-fire zones to enhance stability in Syria, and to work towards a political solution to the conflict.

But the spokesman was careful not to name the Kurdish militia YPG as the attackers.

The YPG is the leading element in the Syrian Democratic Forces, whom the US created in autumn 2015 to remove the Islamic State from northern and eastern Syria.

The SDF, still backed by the US military, is the military branch of the Kurdish administration controlling much of the north and east. Turkey’s Erdoğan Government launched a cross-border military operation in October 2019 to seize a corridor along the Turkish-Syrian border.

Speaking after a Cabinet meeting on Monday, Erdoğan said:

We have no patience left regarding some regions in Syria which have the quality of being the source of attacks on our country. We are determined to eliminate the threats originating from here either with the active forces there or by our own means.

The Prime Minister declared, “The latest attack on our police and the harassment that targets our soil are the final straw.”

As Erdoğan spoke, there was another deadly bombing in Afrin, the city taken by Turkey and anti-Assad factions from the YPG in spring 2018:

The first moments of our teams' work at the scene of a car explosion in Afrin city, this afternoon, north of #Aleppo. five civilians were killed 22 got injured. #WhiteHelmets pic.twitter.com/zhojBq5fJF

The Ministry claimed the YPG attacked an armored vehicle with a guided missile in the border town of Azaz.

The town has been at the center of unrest, with shooting and bombings, since Turkey and anti-Assad forces took much of the Kurdish canton of Afrin in early 2018.

The attack on the Kurdish area followed operations to expel the Islamic State from the region, with Turkey deploying military forces in August 2016.

Last month two Turkish soldiers were killed and three were wounded in Idlib Province when their vehicle was attacked. The Turkish Defense Ministry did not identify the assailants.