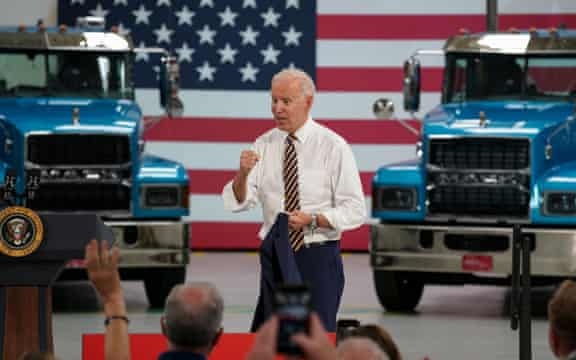 The Senate voted for the $1 trillion package in August, but House progressives have said that confirmation must follow advance in the Senate of the $3.5 trillion budget for social and environmental policies.

President Joe Biden finally accepted the linkage after a meeting on Capitol Hill on Friday.

Pelosi notified colleagues of the revised deadline in a letter on Saturday.

Pramila Jayapal, chair of the Congressional Progressive Caucus, emphasized in an interview with the Seattle Times, “We made all these promises to voters across the country that we were going to deliver on this agenda. It’s not some crazy left-wing wishlist.”

Accepting the position of some Democratic legislators, President Biden links passage of the $1 trillion infrastructure bill to advance of the $3.5 trillion budget for social and environmental policies.

The Administration had pursued adoption of the infrastructure measure, with $550 billion in new money. However, Democrats favoring linkage were concerned that the historic budget would be left behind, amid the threat of a Republican filibuster in the Senate and the opposition of Democratic Senators Joe Manchin and Kyrsten Sinema.

On Friday, Biden said in a closed-door meeting with Democrats on Capitol Hill that linking infrastructure and the budget was “just reality”.

While great progress has been made in the negotiations to develop a House, Senate and White House agreement on the Build Back Better Act, more time is needed. Clearly, the bipartisan infrastructure bill will pass once we have agreement on the reconciliation bill.

Biden indicated that in the face of resistance by Manchin and Sinema as well as the Republicans, Democrats might have to accept a final budget of between $1.9 trillion and $2.3 trillion.

The House delays a vote on the $1 trillion infrastructure bill.

Democratic legislators said the postponement was only a brief setback, rescheduling the vote for Friday.

But tensions persist between two wings of the party: those who want the bill, with $550 billion in new funding, passed as soon as possible, and those who it to follow a Senate advance of the $3.5 trillion budget for social and environmental policies.

President Joe Biden was able to sign a measure to avert a Government shutdown, after both the House and Senate agreed funding through December 3. The authorization also includes more than $28 billion in disaster relief and $6.3 billion to help relocate refugees from Afghanistan.

But Democratic Sen. Joe Manchin of West Virginia continued to threaten the $3.5 trillion budget. He said he would support a package of no more than $1.5 trillion, after a meeting with White House officials in the office of Senate Majority Leader Chuck Schumer of New York.

Manchin is insisting on means-testing new social programs and, amid his links to the fossil fuel industry, control of any provisions for clean energy — including assurances that nothing will eliminate the production and burning of fossil fuels.He also is seeking an initiative on the treatment of opioid addictions, a serious problem in West Virginia.

Congresssional Democrats avert a Government shutdown, but face the challenge of passing the $1 trillion infrastructure plan and $3.5 trillion budget for social policies.

The House passed a bill to prevent a lapse in Government funding at midnight on Thursday, by raising the debt ceiling until December 16, 2022. The 219-212 was almost completely on party lines.

However, even as one crisis was averted, the Democrats faced trouble from within over the Biden Administration’s historic push for domestic programs to reduce poverty and fight climate change.

Democratic Sen. Joe Manchin of West Virginia, a persistent holdout on the Administration’s proposals, said he will not back the budget as it is presently written.

Manchin has refused to back measures on voting rights and, as a prominent recipient of support from the fossil fuel industry, on the environmental crisis. On Wednesday he declared that the budget would “vengefully tax for the sake of wishful spending”.

While I am hopeful that common ground can be found that would result in another historic investment in our nation, I cannot — and will not — support trillions in spending or an all-or-nothing approach that ignores the brutal fiscal reality our nation faces.

Sen. Kyrsten Sinema is also balking at budget reconciliation. The process is needed to circumvent a Republican filibuster, which normally cannot be broken without 60 of 100 Senate votes.

Some House Democrats have said they will not pass the infrastructure bill until the budget is advanced on the Senate floor.

Rep. Pramila Jayapal of Washington, the leader of the Congressional Progressive Caucus, responded to Manchin.

Look, this is why we’re not voting for that bipartisan [infrastructure] bill until we get agreement on the reconciliation bill [for the budget]. It’s clear we’ve got a ways to go.

Both Sinema and Manchin were at the White House on Tuesday for meetings, and senior Administration officials visited Sinema on Capitol Hill for more than two hours on Wednesday.

Treasury Secretary Janet Yellen warns of “catastrophic” consequences if Senate Republicans prevent a raising or suspension of the debt ceiling next month.

Yellen told the Senate Banking Committee on Tuesday about the outcome if Congress does not act before October 18, when the Treasury projects the US will be in default. The Secretary said that situation would undermine the dollar’s status as the international reserve currency.

She also described the effects if GOP Senators continue to block authorization of funding for the Government, shutting down agencies this week. Social Security payments will be delayed, paychecks for troops will be in limbo, and interest rates will rise on credit cards, car loans, and mortgages.

“It would be disastrous for the American economy, for global financial markets, and for millions of families and workers whose financial security would be jeopardized by delayed payments,” Yellen summarized.

As she spoke, the stock market had its greatest losses since May, amid the shutdown threat, inflation, and the spike in Coronavirus from the Delta variant. The S&P 500 was down 2%. Government bonds reached their highest rate since June.

Democratic Congressional leaders spoke with President Joe Biden by phone on Monday about a unilateral lifting of the debt ceiling. They would use the process of reconciliation, circumventing a Republican filibuster which normally can be broken only with 60 votes in the 100-member Senate.

ORIGINAL ENTRY, SEPT 28: Senate Republicans block a spending bill to avert a government shutdown this week and a federal debt default in October.

During the Trump Administration, the GOP Senators voted to raise the debt cap by trillions of dollars, notably to fund a December 2017 package of tax cuts. But they halted any action before Thursday’s deadline to fund the government.

The blocked proposal supported government agencies through December 3 and increased the debt ceiling through Dec. 16, 2022. It also included $28.6 billion in disaster recovery and $6.3 billion emergency aid to support the resettlement of Afghan refugees.

The House passed the measure last week with only Democrats in support. But in the 50-50 Senate, it fell short of the 60 votes needed to proceed. The outcome was 48 to 50, with Senate Majority Leader Chuck Schumer of New York among the No votes to ensure the bill can be reconsidered at some point.

President Joe Biden continued to express hope that Congress would ultimately pass the Administration’s $1 trillion infrastructure plan and historic $3.5 trillion bill for social policies and measures to fight climate change, as well as the government funding and debt ceiling measures.

But Senate Minority Leader Mitch McConnell of Kentucky maintained, “We will not provide Republican votes for raising the debt limit. Bipartisanship is not a light switch.”]

The Republican Party has now become the party of default, the party that says America doesn’t pay its debts.

Sen. Richard Durbin of Illinois, the second-ranking Democrat, called for the removal of the filibuster, which ensures the indefinite blocking of a bill until the blockade is broken by 60 votes.

This is playing with fire for us to risk the full faith and credit of the United States to another damn filibuster. As far as I’m concerned, this is proof positive that the filibuster does not engender bipartisanship, it creates hopeless partisan divisions.

Donald Trump forced the last government shutdown was for a record-setting 35 days in December 2018 and January 2019, insisting on $5.7 billion for his Wall with Mexico. He failed to get the money and then declared a national emergency.