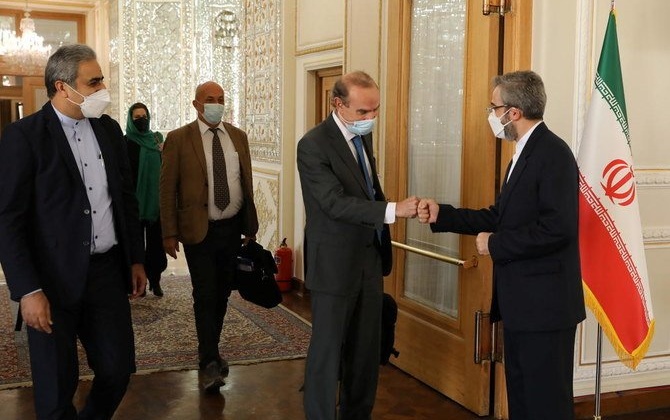 Bolstering the denial that Iran is returning to the Vienna nuclear talks, President Ebrahim Raisi has restated the precondition of a lifting of US sanctions.

Raisi only briefly referred to the nuclear issue in a State TV interview on Monday night. He asserted that Iran is “serious and committed” to return to Vienna for “result-oriented” discussions.

But he added, “For the other side, a readiness to lift sanctions can be a sign for its seriousness.”

He reiterated that Tehran is "serious about result-oriented negotiations" and called for the removal of "unjust" US sanctions against Iran. Gave no dates for resumption of talks. pic.twitter.com/mE1eNwiCAj

European Union foreign policy chief Josep Borrell cautioned on Monday, “We made it clear to the Iranians that time is not on their side and it’s better to go back to the negotiating table quickly.”

Khatibzadeh said, in line with statements from European Union officials, that Deputy Foreign Minister Ali Baqeri will travel to Brussels for talks with the EU’s deputy foreign head Enrique Mora.

EU sources said, after Mora’s two-day trip to Tehran last week, that “talks about talks” would continue in Brussels before any resumption of negotiations between Iran and the 4+1 Powers (UK, France, Germany, China, and Russia) over US re-entry, lifting of American sanctions, and a return to Iranian compliance with the 2015 nuclear deal.

Another MP, Alireza Salimi, indicated that Foreign Minister Hossein Amir-Abdollahian had set a precondition of the removal of some US sanctions before resumption of negotiations.

Speaking after a further closed-door session with the Foreign Minister, Salimi quoted Amir-Abdollahian as saying the Iranian negotiating team will adhere to a December law on sanctions removal and safeguard of national interests. The Foreign Minister said the US must show “goodwill and sincerity” and take a “serious” step before a return to Vienna.

According to Salimi, Amir-Abdollahian said Iran will not tie its economic plans to the assumption of a lifting of comprehensive US sanctions, imposed by the Trump Administration in November 2018.

ORIGINAL ENTRY, OCT 15: The European Union is waiting on movement from Iran before any resumption of stalled talks over renewal of the 2015 nuclear deal.

The sixth set of Vienna talks were in June. At the time, Iran’s lead negotiator, Deputy Foreign Minister Abbas Araqchi, said Tehran and the 5+1 Powers (US, UK, France, Germany, China, and Russia) were “closer to the end of the road” on agreement over US re-entry, lifting of American sanctions, and Iran’s return to compliance with the Joint Comprehensive Plan of Action.

But the discussions were adjourned for the managed election of Iranian President Ebrahim Raisi. After his inauguration in early August, the Government has held out against any return to the negotiating table.

But EU foreign policy head Josep Borrell, in Washington for discussions with US Secretary of State Antony Blinken, indicated there was no breakthrough for negotiations.

Borrell’s spokesman Peter Stano said, “We are awaiting the Iranians’ response. A meeting will be called if all parties are in agreement and are all ready. There is an urgent need to resume discussions very soon.”

After several hours of talks between Mora and Baqeri Kani, Iran’s Foreign Ministry said in a statement, “At the end of this meeting, the two parties agreed to continue dialogue on questions of mutual interest in the coming days in Brussels.”

Baqeri Kani immediately moved from the discussions to a phone consultation with Russian Foreign Minister Sergey Lavrov. The Iranian minister said the talks with the European Union were “positive” on “finding practical solutions to current deadlock in Vienna talks”, and will continue in two weeks in the Belgian capital.

Meanwhile, Iran’s envoy to international organizations in Vienna, Kazem Gharibabadi, put out a hard line with a threat to leave the Nuclear Non-Proliferation Treaty and a pledge to continue non-cooperation with the International Atomic Energy Agency:

What is the advantage of being both a NPT member and fully implementing the Agency’s safeguards? How could one see the IAEA as a serious, professional and impartial partner when it does not pursue evenly and justly the implementation of its safeguards regime for all its members?

Gharibabadi issued his statement on Twitter after IAEA head Rafael Grossi said in an interview that Agency cannot oversee Israel’s nuclear program because the Israelis have not acceded to the NPT.

Iran’s agreement with the IAEA for inspections of nuclear facilities expired at the end of June, and Tehran has been withholding all monitoring videos from the Agency since February. The IAEA also says its female inspectors have been harassed by Iranian personnel.