Biden’s Appeal: “We Need to Invest in Ourselves” 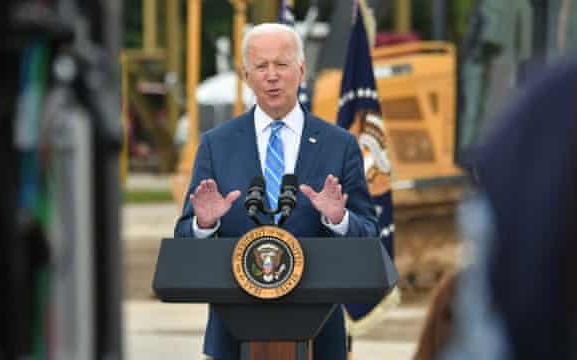 Trying to secure Congressional passage of both the $1 trillion infrastructure bill and a modified version of the historic $3.5 trillion budget for social and environmental policies, President Joe Biden tells Americans that “we need to invest in ourselves”.

Biden spoke at a manufacturing plant in Michigan on Tuesday, as both bills near decisive moments in the Senate and House.

This is a blue-collar blueprint for how we restore America’s pride. These are jobs that can’t be outsourced. We’re going to put plumbers and pipe-fitters back to work replacing lead pipes in America so families and children can drink clean water.

We’re going to put line workers and electricians to work, laying thousands of miles of transmission lines and to build a modern infrastructure and energy grid.

We’re going to make high-speed Internet affordable and available to everybody in America.

Biden faces the challenge of overcoming Republican resistance, as Senate Minority Leader Mitch McConnell of Kentucky — repeating his line of the Obama era — vowed on Tuesday to obstruct any measures pursued by the Administration. The President must also retain the support of all 50 Democratic Senators in an evenly-divided Senate, with both Sens. Joe Manchin of West Virginia and Kyrsten Sinema of Arizona holding out against the legislation.

Last week, Biden accepted linkage of the infrastructure bill to the social-environmental budget, after Democratic progressives in the House said they would not confirm the “Build Back Better” package without a Senate advance on the budget.

House Speaker Nancy Pelosi has set an October 31 deadline for the final vote on the infrastructure package, with $550 million in new spending, which was approved by the Senate in July.

Biden said on Tuesday that “human infrastructure” initiatives “will boost our manufacturing capacity, investing in new and retooled facilities that employ American workers with good wages and benefits”.

Biden maintained the original $3.5 trillion budget yesterday. However, he and his officials appears to be offering a compromise package behind closed doors.

The White House has mentioned a figure of $1.9 trillion to $2.3 trillion in discussions with Manchin — who has suggested a $1.5 trillion target — and Sinema.

However, in a meeting with Biden on Monday, Rep. Pramila Jayapal of Washington — the chairwoman of the Congressional Progressive Caucus — suggested $2.5 trillion to $2.9 trillion.

If the final package fails to meet this moment, it will be a squandered opportunity of historic consequence. These aren’t just numbers on a page or props for political posturing — every dollar represents real investments in climate, housing, caregiving and other critical programs our communities need to survive and thrive.

Senate Minority Leader Chuck Schumer of New York said on Monday, “Nobody is going to get everything they want. But no matter what, our final proposal will deliver the core promise we made to the American people.”

On Tuesday, Biden met virtually for about an hour with some Democratic legislators who face competitive elections in 2022. The group reportedly focused on the expanded tax cut giving monthly payments to families, climate change measure, and reduction in the cost of prescription drugs.