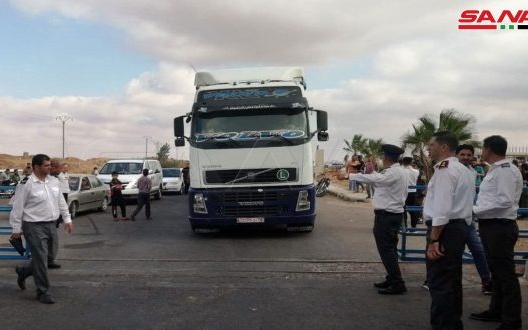 Officials await a truck at the Naseeb-Jaber crossing on the Syria-Jordan border, September 28, 2021

The Biden Administration is accepting Jordan’s “normalization” of relations with the Assad regime.

A “senior administration official” confirmed the shift after Jordanian King Abdullah’s visit to Washington this year; an arrangement to ship Egyptian natural gas to Lebanon through Jordan and Syria; the reopening of the main border crossing between Jordan and Syria; and Abdullah’s call with Bashar al-Assad this week, the first between the two men since the Syrian uprising began in March 2011.

The official maintained, “We did not give Jordan a green light or an orange light. We did not support the call. We’ve made clear that sanctions restrictions remain in place and nothing should come for free.”

However, he said the Administration will not try to block the contacts, except where US law specifically requires it.

The State Department initially welcomed the announcement of the reopened Jordan-Syria border announcement. Jordanian media reported that President Joe Biden gave King Abdullah explicit assurances that Amman will not be sanctioned under the Caesar Act, adopted in December 2019 over the Assad regime’s mass killings and crimes against humanity.

Col. Moayad Al Zubi, the head of the Jaber-Naseeb crossing, told Reuters, “The security situation is now stable on the Syrian side and we hope it remains stable.”

A convoy of Syrian trailers queued to enter Jordan. Police officers with dogs searched cars and coaches, and taxis with passengers also lined up for customs and immigration control.

The crossing was initially reopened in October 2018 after a three-year stoppage. It was closed again at the outset of the Coronavirus pandemic in mid-March 2020.

“The aim of these understandings is to boost trade exchange between the two countries to achieve the interests of every party,” Jordanian Trade and Industry Minister Maha Al Ali said in a televised interview.

In Washington in August, Jordan’s King Abdullah told US legislators of the need to re-engage the Assad regime. His briefing note asserted, “Jordan could lead an initial engagement with the regime to guarantee commitment before broader contacts are initiated.”