UPDATE: Texas Camp Cleared — 1000s of Haitians Deported While 1000s Moved Inside US 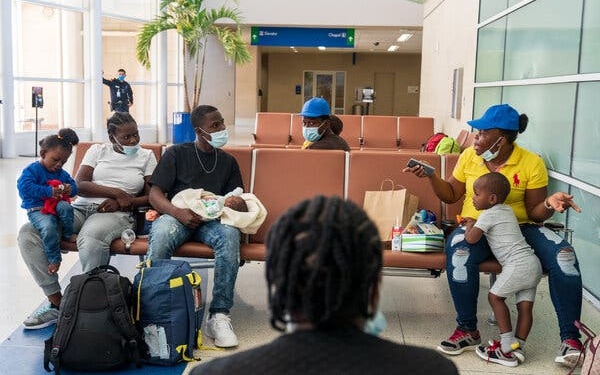 The Del Rio camp in southern Texas has been cleared of the 15,000 Haitians who gathered there, hoping for immigrant status in the US.

On Sunday, Homeland Secretary Alejandro Mayorkas defended the deportation of about 4,000 migrants, some of whom have not lived in Haiti for years, using the Title 42 provision for the Coronavirus pandemic.

The Centers for Disease Control [and Prevention, or CDC] has a Title 42 authority that we exercise to protect the migrants themselves, to protect the local communities, our personnel and the American public.

He did not explain why some Haitians were expelled because of a supposed threat, while thousands were flown to other US cities to await hearings.

They noted, “The absence of effective Covid-19 mitigation services at the border and the expulsion of people to situations in which they may be exposed to Covid-19 and unable to practice prevention are contrary to the US government commitment to address Covid-19 globally.”

ORIGINAL ENTRY, SEPT 24: As the Biden Administration distances itself from horse-riding Border Patrol agents who chased Haitian migrants, thousands of migrants have been deported from the Taxas camp — but thousands have been transferred to other parts of the state and the US.

Almost 2,000 have been moved from Del Rio, where 15,000 migrants gathered in a camp near a highway overpass, to Houston this week.

In Houston, nearly 2,000 Haitian migrants have arrived this week from the small border community of Del Rio, with buses pulling up to a huge shelter nearly every hour. In San Antonio, hundreds more have flown to destinations such as New York, Boston, and Miami.

Inso Isaac, 40, who left Haiti years ago to live in Chile, said, “We are so happy to be in America. We want to start a new life here.” He, his wife, and their 2-year-old son cross several Latin American countries to arrive last week in Del Rio. They flew to New York on Wednesday, where they will stay with relatives on Long Island.

At the same time, about 2,000 Haitians have been deported on chartered flights to their native country, even though some of them have not been there for years.

Press Secretary Jen Psaki said on Thursday that officials were removing single adults and migrant families. However, But pregnant women and families with young children were remaining in the US because some countries will not take deportee families with young, vulnerable children.

UNICEF estimated that more than two in three Haitian migrants who have been returned to Haitian capital Port-au-Prince are women and children.

About 40% of the deportees are families, according to a Department of Homeland Security official.

Isaac said from the Houston airport, “I felt bad, because we all came here for the same reasons. I knew not everyone was going to make it through. We were lucky.”

On Thursday, the Department of Homeland Security said the horse patrol unit in Del Rio has been temporarily suspended, with an investigation of the pursuit of migrants.

But the US special envoy to Haiti, Daniel Foote, resigned in protest over the deportations. He wrote Secretary of State Antony Blinken:

I will not be associated with the United States’ inhumane, counterproductive decision to deport thousands of Haitian refugees and illegal immigrants to Haiti, a country where American officials are confined to secure compounds because of the danger posed by armed gangs to daily life.

Foote was appointed in July after the assassination of Haitian President Jovenel Moïse.

1/8 Daniel Foote's resignation letter from @StateDept Haiti envoy position (to @SecBlinken) may be best critique of US Haiti policy by a US envoy since Frederick Douglass in 1893. https://t.co/geBEdn3R7E