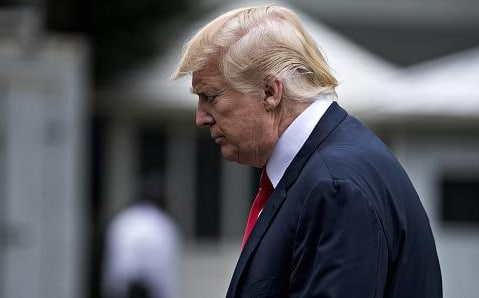 A federal judge in Washington DC rules that Donald Trump’s accountants Mazars USA must turn over some of his financial records to the US House.

US District Judge Amit Mehta considered the House request for Trump’s records under standards set out by the Supreme Court in a 7-2 decision last year.

He upheld parts of the House subpoena around the Foreign Emoluments Clause of the Constitution, which prohibits Presidents from receiving payments in kind from a foreign power or its representatives. He also authorized release of records concerning the General Services Administration’s lease with the Trump hotel at the Old Post Office building in Washington.

Mehta also ruled that the House Oversight Committee can receive some financial documents from 2017 and 2018.

The Committee has presented ‘detailed and substantial’ evidence that President Trump, at least through his business interests, likely received foreign payments during the term of his presidency….The Committee therefore is not engaged in a baseless fishing expedition.

The judge denied the provision of tax records from 2011 to the start of Trump’s presidency as legislation being considered by the House “does not warrant disclosure of President Trump’s personal and corporate financial records when balanced against the separation of powers concerns raised by the broad scope of its subpoena”.

The House Oversight Committee issued the subpoena for the records in April 2019. Trump’s attorneys filed a lawsuit in federal court the following month to block compliance. Mehta and the US Court of Appeals for the DC Circuit upheld the subpoena, with the Supreme Court hearing Trump’s appeal.

The Supreme Court’s majority opinion, written by Chief Justice John Roberts, upheld Congressional authority to issue subpoenas for a President’s personal financial records. However, Roberts instructed lower courts to weigh those subpoenas against “special concerns regarding the separation of powers”.

ORIGINAL ENTRY, JULY 31: The Justice Department says the US Treasury must turn over Donald Trump’s tax returns to Congress.

In a 39-page legal opinion on Friday, the Department’s Office of Legal Counsel explained why six years of returns should be given to investigators of the House Ways and Means Committee. The Treasury later told a federal judge that it will do so.

The Trump Administration had blocked any handover for years. Speaker Nancy Pelosi responded, “The American people deserve to know the facts of his troubling conflicts of interest and undermining of our security and democracy as president.”

Trump’s attorneys may try to draw out the process, seeking an injunction to stop the transfer. The Treasury and House officials requested that a Federal District Court give the Trump team until Tuesday to decide.

Rep. Richard Neal of Massachusetts, the chair of the Ways and Means Committee, said, “As I have maintained for years, the committee’s case is very strong and the law is on our side. I am glad that the Department of Justice agrees and that we can move forward.”

Trump faced issues over conflict of interest throughout his Presidency. He did not separate himself from the activities — and profits — of the Trump Organization, and he was accused of violating the Constitution’s emoluments clause barring financial benefits from the office.

The Trump Foundation has been wound up after cases over diversion of funds. The Trump Organization and its officials are the subjects of federal and state investigations: almost three weeks ago, the Organization and its chief financial officer, Allen Weisselberg, were indicted on tax and finance charges.

Trump is under legal pressure after the US Attorney’s office in Manhattan received eight years of tax and business records, following a Supreme Court ruling in February. The New York State Attorney General formally joined the Manhattan criminal investigation in May.

Trump’s son Eric cried out on Twitter after the Justice Department’s filing:

Rep. Kevin Brady of Texas, the ranking Republican on the House Ways and Means Committee, said, “If politicians in Congress can demand, and ultimately make public, the president’s private tax returns, what stops them from doing the same to others they view as a political enemy?”