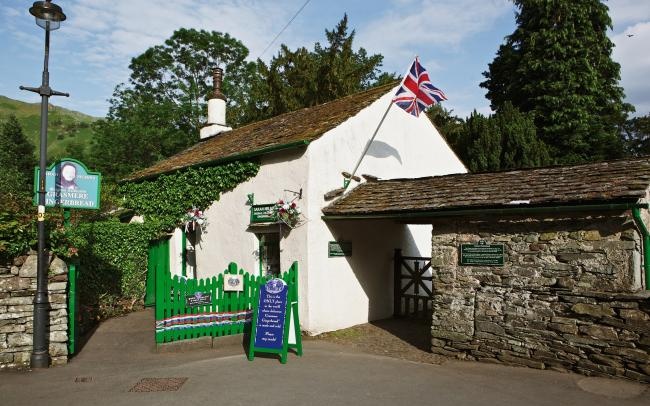 The historic Grasmere Gingerbread shop is one of the Lake District businesses suffering from staff shortages amid Brexit and Coronavirus.

Last week my wife and I enjoyed our first vacation in 18 months, travelling through the Lake District in northwest England.

We visited with friends who run a local business. We hiked until our legs ached, climbing to summits and taking in the view of hills shrouded in mist above the waters.

We enjoyed the normal. Or, rather, the not-quite-normal.

For in Hawkshead, Satterthwaite, Coniston, and Ulverston, we saw shops, diners, and pubs with limited hours or shut entirely. Similar signs from the café at John Ruskin’s Brantwood house to the excellent cinema-restaurant in Ambleside: “Staff Shortage”. Even Grasmere Gingerbread, with long queues waiting for Victorian baker Sarah Nelson’s creation, says it is struggling to stay open.

Slowly coming out of the pandemic, we are still in Brexit Britain.

The situation in Cumbria is part of our new nation below the national headlines. Staff from the European Union had become part of many businesses, especially in tourism and hospitality. Suddenly, they have been taken away, whether by Brexit’s bans or its tangled bureaucracy. Almost 70% of businesses say recruitment is a significant problem, double the 34% reporting problems in June.

The pandemic, including the latest phase of the “pingdemic”, has compounded the problem. But paradoxically, it has given the Government cover to avoid the longer-lasting issue, feigning that this is just a temporary matter. Cumbria Tourism, armed with research but unsure if anyone in London will listen, is calling on local firms to lobby Whitehall. Liberal Democrat MP Tim Farron has written Immigration Minister Kevin Foster asking for extension of the Government’s Youth Mobility Scheme visa to include European countries, summarizing in a Parliamentary debate:

Having survived COVID, guess what? Loads of [businesses] are closing now. Why? Because of the Government’s barmy, impractical, stupid visa rules.

Home Secretary, why did you do all this? Why did the Government make provisions to support hospitality and tourism in the past 16 to 17 months if they were only going to kill them off by stupid visa rules at the end?

But the Brexit break from Europe prevents any Government response. Instead, local stopgaps are being pursued, such as a dedicated bus service to bring workers to towns like Keswick from unemployment hotspots in the northwest.

“These People Have Left the UK”

Geetie Singh-Watson, who opened Britain’s first organic pub, had to limit service at The Bull in Totnes in southwest England. Plans for a bed-and-breakfast and fish-and-chip shop have been shelved.

“I have been running restaurants for the best part of 30 years and I have never before closed a service due to staff shortages,” she says. The fundamental problem is Brexit.

Half of my staff have come from somewhere else in the world most of the time and particularly in London, and that will be the same picture for other businesses too.

Those people have now left the UK and we are now competing with each other for what is left.

The Government meets the challenge with mantras: “[We] need to invest in our domestic workforce…. British people repeatedly voted to end free movement and take back control of our immigration system.” The Home Office chides that businesses are to blame for “relying on cheap labour from abroad”.

Hall responds, “The idea that suddenly there was a whole horde of British people anxious to pick fruit or work 12 hour days in a restaurant – we, who have restaurants, knew it was daft but there wasn’t anything we could do about it.”

Singh-Watson is resigned to unending difficulty: “I don’t think there’s a political will to address it because it will show that the problem is not Covid but Brexit.”

Photos of empty shelves at supermarkets are more likely to make the pages of national publications, with a shuttered restaurant in the local paper, if noted at all.

But they are connected in our Brexit Britain and its decline by a thousand cuts. HGV drivers return to Europe during the pandemic and don’t come back. Skilled trade workers are unable or unwilling to come back to construction sites. Students who once filled summer positions are going elsewhere.

Ed Viggars, operations director at Encore Personnel, says bluntly, “I’ve never seen anything like this before in the 20 years I’ve worked in recruitment.”

On Tuesday, the Office for National Statistics reported that the number of people in employment increased by 182,000 to 28.9 million in June, with the unemployment rate down to 4.7% from 4.8%.

The ONS’s Jonathan Athow proclaimed, “The world of work continues to rebound robustly from the effects of the pandemic.” Chancellor Rishi Sunak beamed, “I know there could still be bumps in the road but the data is promising.”

But scratch away the veneer, and you find that the employment figure is still 201,000 below the pre-pandemic level. Job vacancies hit a record high of 953,000 from May to July, 168,000 more than at the start of 2020. Preliminary payroll data puts the actual number at more than a million.

Suren Thiru, head of economics at the British Chamber of Commerce said tersely, “With many firms facing a more deep-rooted squeeze on labor supply from the impact of COVID and Brexit, staff shortages may persistently weigh on economic activity.”

From Bogle Crag, looking from Windermere to Grasmere and across the hills of the Fairfield Horseshoe, you don’t see the people in the villages below. The whitewashed buildings don’t show the signs of disruption and erosion. It is an idyllic view, suspending reality.

Which, I suspect, is the view that the Johnson Government desires.