“I Thought I Was Going to Die”: Officers Testify to House Committee About Capitol Attack 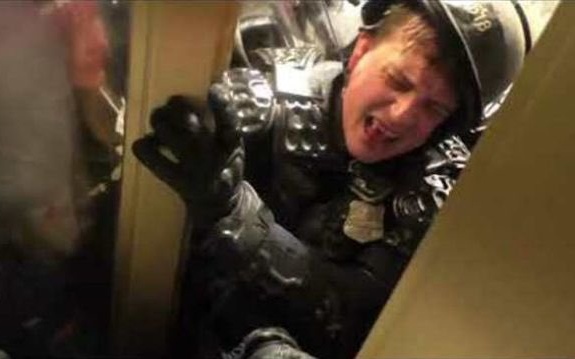 Washington DC police officer Daniel Hodges is crushed against a door by a Trumpist mob invading the US Capitol on January 6, 2021. On Tuesday, Hodges testified to a House select committee about the assault.

In vivid testimony, Capitol and Washington DC police officers have described the threat to their lives from Trumpist insurrectionists in the January 6 attack on the US Capitol.

In the opening day of hearings of the House select committee investigating the assault, they left no doubt about the nature and extent of the attack, seeking to prevent Congressional confirmation of the victory of President-elect Joe Biden.

Capitol Police sergeant Aquilino Gonell said, “All of them — all of them — were telling us, ‘Trump sent us’.”

Hundreds of Trump supporters charged past Capitol Police into the building, just after Donald Trump called on them to march on the complex and “fight like hell” to prevent Biden’s confirmation. Others broke through doors and windows and beat and tasered officers. Five people died, including an officer, died.

Washington DC officer Michael Fanone explained to the legislators, “I was grabbed, beaten, tased, all while being called a traitor to my country. I was at risk of being stripped of and killed with my own firearm, as I heard chants of ‘Kill him with his own gun.'”

He continued, “They tortured me, they beat me, I was struck with a Taser device at the base of my skull numerous times.” Finally, he yelled that he had kids and a few people stepped in to stop the assault. Unconscious for about four minutes, he was carried inside the building.

Fellow officer Daniel Hodges was crushed against a door by the insurrectionists, who ripped off his gas mask and tried to gouge out his eye.

To my confusion, I saw the thin blue line flag, a symbol of support for law enforcement more than once, being carried by the terrorists as they ignored our commands and continued to assault us.

Harry Dunn, who is Black, spoke of racist abuse: “Nobody had ever, ever called me a nigger while wearing the uniform of a Capitol Police officer.”

Gonell recalled his thought on the day: “This is how I’m going to die.”

The veteran of the 2003 Iraq War spoke of colleagues who “looked beat to hell” after two hours non-stop fending off the mob: ”

[In Iraq] we could run over an IED and that’s it but at least we knew we were in a combat zone. Here, in our nation’s capital, we were attacked multiple times.

“A Hit Man Sent Them”

Cheney set out the task of the investigation:

We must know what happened here at the Capitol. We must also know what happened every minute of that day in the White House — every phone call, every conversation, every meeting leading up to, during and after the attack. Honorable men and women have an obligation to step forward.

The officers’ testimony was complemented by graphic footage of the attack, and by radio recordings of officers requesting assistance and reporting multiple injuries.

Officer Gonell spoke of the long-term consequences, “For most people, January 6 happened for a few hours. But for those of us who were in the thick of it, it has not ended. That day continues to be a constant trauma for us.”

He said many of his colleagues have “quietly resigned” since January 6.

Officer Hodges described a “white nationalist insurrection”, with most of the attackers white and male, abusing officers who were of different race.

“They tried to recruit me,” he recalled. “One of them came up to me and said, ‘Are you my brother?’”

The officer concluded, “People who follow Donald Trump are more likely to subscribe to that kind of belief system.”

Officer Dunn called on the lawmakers to do their duty: “There was an attack on January 6, and a hit man sent them. I want you to get to the bottom of that.”