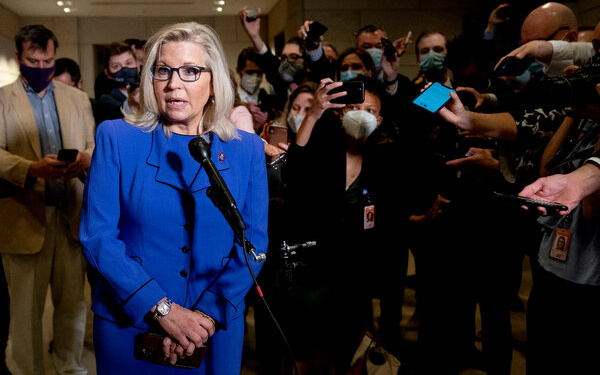 Rep. Liz Cheney in the US Capitol after she was removed from the House GOP leadership, May 12, 2021 (Stefani Reynolds/New York Times)

As expected, Rep. Elise Stefanik of New York — a Trumpist who entered the House as an establishment Republican in 2014 — has replaced Rep. Liz Cheney of Wyoming as the GOP Conference Chair, the third-ranking position in the chamber.

Rep. Ken Buck of Colorado recognized the Trumpist hold on Republicans, “The base of our party has listened to President Trump. And there’s a lot of feedback.”

In a vote of the Republican Conference on Wednesday morning, Cheney was stripped of the Conference chair, the third-ranking GOP House role.

Cheney’s transgression was to refute Trump’s lies about the 2020 Presidential election, and to call out his instigation of the January 6 attack on the US Capitol.

After the gathering, Cheney added to a series of statements highlighting the threat to the US Constitution and political system.

Rep. Liz Cheney: “I will do everything I can to ensure that the former President never again gets anywhere near the Oval Office.

“We have seen the danger that he continues to provoke with his language” https://t.co/8lCpZhNBf0 pic.twitter.com/b4kWwkWbnu

See also Cheney: Republicans on “A Path That Abandons the Rule of Law”

In the closed-door session, the Wyoming Representative urged legislators not to “let the former president drag us backward”. However, she accepted her dismissal: if Trumpists wanted a leader who would “enable and spread his destructive lies”, they had “plenty of others to choose from” for her position.

She closed with a prayer quoting from the Book of John, “Ye shall know the truth, and the truth shall set you free”, and asking God to “help us to remember that democratic systems can fray and suddenly unravel — when they are gone, they are gone forever”.

Some of her colleagues booed her.

Cheney is expected to be replaced by Rep. Elise Stefanik of New York, who entered the House as a mainstream Republican in 2014 but converted to diehard Trumpism and supported Trump’s disinformation about the election.

“Republicans Must Take Back Their Party”

House Minority Leader McCarthy criticized Trump immediately after the Capitol Attack, saying Trump was responsible for the violence which had threatened the lives of legislators and Vice President Mike Pence. But he quickly gave way to the Trumpists, travelling to Trump’s resort in Florida to display his obedience.

Immediately after the Capitol Attack, 2/3rds of Republican House members — as well as several GOP Senators — still refused to recognize the victory of President Joe Biden.

At the White House later in the day, following a meeting with President Biden and other Congressional leaders about infrastructure, McCarthy brushed off a question Stefanik’s endorsement of Trump’s disinformation.

“I don’t think anybody is questioning the legitimacy of the presidential election,” McCarthy said. “I think that is all over with.”

Pelosi added, “For the sake of our democracy, reasonable Republicans across the country must take back their party.”

Trump, removed from social media over his instigation of violence, issued a statement from his Mar-a-Lago resort, insulted Cheney as “a poor leader, a major Democrat talking point, a warmonger and a person with absolutely no personality or heart”.