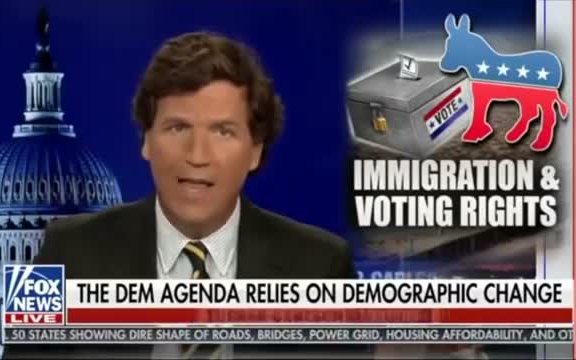 Tucker Carlson is not a stupid man. He knows exactly what he is doing.

So when the Fox TV polemicist referred to “white replacement” last week, saying immigration would “dilute the political power” of Americans, he realized that he was promoting a racist theory — a motivation for deadly attacks by far-right extremists in the US.

In prime time, Carlson gave an impassioned plea for the conspiracy theory, born from those who believe that “elites” retain through demographic manipulation and culture replacement of a dwindling white population with non-European peoples.

The demagogue may or may not believe his racism, but it would be naive to dismiss Fox’s cultivation of viewers who might embrace all or part of the rhetoric. In Charlottesville, Virginia in 2017, the white supremacist Unite the Right rally marched to the slogan “You will not replace us”, sometimes specifying “Jews will not replace us”. Donald Trump referred to the Great Replacement, promoted it through a 2019 tweet promoting his Wall with Mexico, and supported it with descriptions of Muslims and migrants as “invaders”.

Unsurprisingly Lachlan Murdoch, Fox’s CEO, looked at ratings and revenue and defended Carlson’s comments. He responded to the call for Carlson’s dismissal by Jonathan Greenblatt, national director of the Anti-Defamation League:

Fox Corporation shares your values and abhors anti-Semitism, white supremacy and racism of any kind. In fact, I remember fondly the ADL honouring my father with your International Leadership Award, and we continue to support your mission.

Concerning the segment of Tucker Carlson Tonight on 8 April, however, we respectfully disagree. A full review…indicates that Mr Carlson decried and rejected replacement theory. As Mr Carlson himself stated during the guest interview: ‘White replacement theory? No, no, this is a voting rights question.”

In fact, that “voting rights question” was Carlson’s declaration that the Democratic Party is trying to replace the current electorate “with new people, more obedient voters, from the third world”. He continued that “they” become “hysterical because that’s what’s happening, actually. Let’s just say it. It’s true.”

He added the replacement dog whistle, “Every time they import a new voter, I become disenfranchised as a current voter.”

This is far from new for the prime-time host. In 2019, a gunman killed 22 people in El Paso, Texas after posting a manifesto complaining about a “Hispanic invasion”. Carlson dismissed the content, saying that promotion is white supremacy is merely a “hoax”. In the wake of January’s Capitol Attack led by Trump supporters, Carlson repeatedly defended their actions with the Great Lie that November’s election stolen from Trump.

Carlson’s polemic is absorbed by more than 3 million viewers, many of them in the 25-54 white male category. There is talk among Trumpists of the demagogue as a GOP Presidential candidate in 2024 if Trump does not run.

The satirist John Oliver notes, “Of all the things that Tucker is — a conspiracy theorist, a misogynist, an Islamophobe, a troll — one of the most dangerous is that he is the most prominent vessel in America for white supremacist talking points.”

Calling Out The Supremacist Elite

Carlson and his fellow conservative commentators at Fox — Laura Ingraham, Tomi Lahren, Lou Dobbs (who recently lost his show), and Jeanine Pirro — have a shared background with politicians like Donald Trump (Senior and Junior), Sen. Josh Hawley and Rep. Matt Gaetz. All claim to represent the common man and woman, but all come from positions of privilege. All have used connections and wealth to spread a rhetoric of fear and rage.

All use their positions to abuse an America that does not look like their US of privilege, portraying others as wanting a “poorer, dirtier, and more divided” future. They depict any critique of their preferred supremacy as an attack on “Western civilization”. They depict the devil’s work of the “woke” elite who are unleashing everything that is not American: immigration from Latin America, Muslims, LGBTQ communities, and those who are supposedly “anti-Christian”. They proclaim an enemy hellbent on cancelling culture by taking down Confederate statues.

There are no solutions, or attempts at solutions, from Carlson and his mates. The only objective is to create rage to protect their profits, positions, and idea of supremacy. Whether it is promoting replacement theory, defending Georgia’s restrictions on voting rights, or questioning the use of Coronavirus vaccinations and masks because these are associated with Joe Biden, these are journalists or analysts. These are “entertainers dealing in the perverse and pernicious of half-baked lies, angry monologues, and relentless personal attacks.”

So how do you deal with the likes of Carlson and their rhetoric? You have to take them on. Jonathan Greenblatt’s call for the sacking of Carlson may have been rebuffed by the Murdochs. But there was also the response of Dr. Anthony Fauci, the White House’s top Coronavirus advisor, on Wednesday.

Asked about Carlson’s questioning of the safety and efficacy of vaccines and masks, Fauci was blunt about “a typical crazy conspiracy theory”. He continued, “Look at the data. The data are overwhelming….I don’t have any idea what he’s talking about.”

There is a precedent. In 2004 Jon Stewart, then the host of The Daily Show, famously called out Carlson and his rhetoric on CNN’s Crossfire:

I’m here to confront you, because we need help from the media and they’re hurting us….What you do is not honest. What you do is partisan hackery….You have a responsibility to the public discourse, and you fail miserably.

Crossfire was soon cancelled, but Carlson rose from the media grave, resurrected by the undead of attack TV. So 17 years later, he stalks with the impression of invulnerability. He crosses lines such as white supremacy, with the effect of his vitriol spreading beyond the US into countries such as the UK.

So we must drive the stake through his hackery. He is beyond “responsibility”, and his manipulation of white supremacy will only keep hurting us.