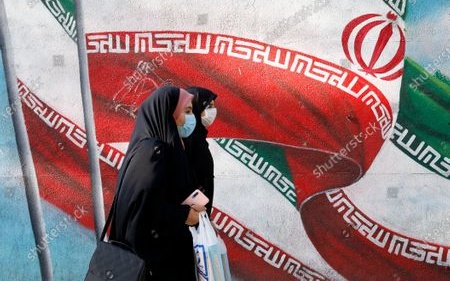 Coronavirus cases continue to surge in Iran, as President Hassan Rouhani replaces his assurances with concern.

Rouhani told the National Coronavirus Task Force on Saturday, “Unfortunately, the fourth wave of the disease has started in two provinces in the country, and if we do not observe health protocols, this wave will enter other provinces as well.”
.
The President told the Task Force in last Saturday’s meeting, “I think the peak of this disease is over.”

ORIGINAL ENTRY, MARCH 31: Iran is facing another wave of the Coronavirus pandemic, as cases surge 40% in a week.

The death rate has not surged yet, with 91 reported yesterday, but authorities fear an imminent spike, given the average two-week lag between cases and fatalities.

Iran has suffered 62,569 deaths in the pandemic. There have been more than 1.88 million confirmed cases.

After the initial wave of the pandemic last spring, Iran set records last autumn when containment measures were eased. Daily infections almost quadrupled to reach 14,051 on November 26, and deaths peaked at 483 on November 24.

The Rouhani Government had warned the public that celebrations for Iranian New Year, which began March 21, could break the containment of the virus. Officials have also expressed concern about dangerous variants spreading through the country.

I think the peak of this disease is over despite all the different mutations of the virus. The peak of the coronavirus pandemic is declining due to the spread of vaccination.

Iran has received supplies of Russia’s Sputnik V vaccine. The first inoculation was given on national TV on March 8. However, the Government has not yet begun a mass vaccination program, and the Government failed to meets its target of obtaining 2.8 million vaccine doses by March 21.