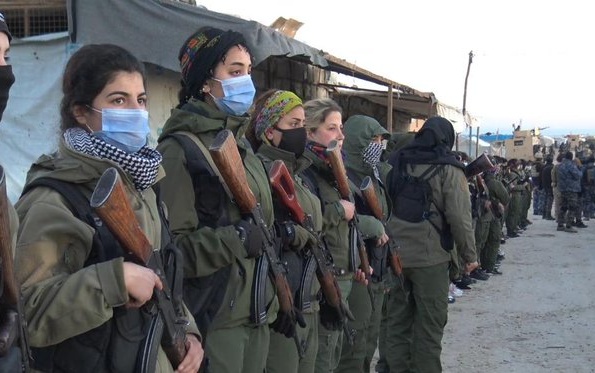 In this picture from the Syrian Democratic Forces, troops line up for an operation in the al-Hol camp in northwest Syria, March 28, 2021

The SDF said it has detained Abu Karar, the second-ranking ISIS operative in the camp, with seven others in a sweep of the camp overnight on Thursday/Friday.

Our #SDF and #Asayish partners arrested 8 members of #daesh, including the second ranking leader Abu Karar at al-Hawl IDP camp. This security operation aims to continue the enduring #defeatdaesh mission, while improving security and safety for humanitarian efforts of NGOs.

Kurdish officials say they have sent almost 5,000 troops of the US-backed Syrian Democratic Forces into the al-Hol camp in northeast Syria, following a series of killings.

The SDF said nine people, including Islamic State members, had been arrested in the security sweep. Unconfirmed reports claimed more than 30 detentions.

US forces were not involved, but a spokesman for the American-led Operation Inherent Resolve tweeted about an operation “focused on improving the safety and security of those who live and work in al-Hawl” and defeating ISIS.

On Friday, Peter Maurer, President of the International Committee of the Red Cross, visited al-Hol and said it is a place where “hope goes to die”: “Food, basic medical services, everything is complicated.”

He cited the lack of education for “kids who grow older and older and who don’t have a perspective for the future”.

“[It is] a scandal that the international community allows such a place to continue: not because of insurmountable humanitarian problems, but because of political divergences,” Maurer emphasized.

ORIGINAL ENTRY, JAN. 23: Twelve displaced people have been murdered over 16 days at the overcrowded al-Hol camp in northeast Syria.

The UN reported the killings at the camp, whose residents include the families of former Islamic State fighters. It is in an area controlled by a Kurdish autonomous administration, and is overseen by the US-supported, Kurdish-led Syrian Democratic Forces.

UN officials expressed concerns over “deteriorating security conditions”. The camp has more than 60,000 residents, more than 80% of whom are women and children.

The 12 victims were Syrians and Iraqis, including one Iraqi woman. Another person was critically injured.

The circumstances of the murders were not clear. However, Sonia Khush, a director for Save the Children, said violence escalated in August.

Whether it’s for ideological reasons, or personal disputes or criminality or a combination of all three, the effect on humanitarian services is what is concerning us.

Our information is that these attacks are mostly being carried out by men. They happen in broad daylight. In one instance a well of our school was hit by 10 stray bullets. In another more recent incident, one of our school tents partly burned down.

The UN statement said the violence “jeopardises the ability for the UN and humanitarian partners to continue to safely deliver critical humanitarian assistance and services to residents”.

Jens Laerke, spokesman for the UN Office for the Coordination of Humanitarian Affairs, called on the Kurdish authorities “to ensure the safety of residents but also the humanitarian workers”.

Some countries have repatriated women and children. Uzbekistan brought back 73 children and 25 women, and last month Germany and Finland arranged the return of 18 children and five women. After representation from Australian officials last autumn, all of the country’s nationals were moved to other camps.