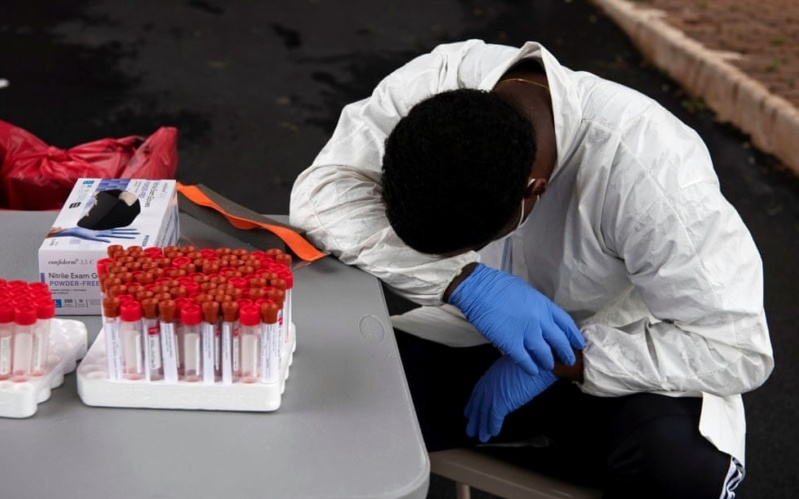 Adm. Brett Giroir, who oversaw testing, says that Donald Trump and his inner circle lied about the availability of the tests. Dr. Robert Redfield, the former director of the Centers for Disease Control and Prevention, says Health Secretary Alex Azar and his senior officials pressuring the CDC to revise scientific reports.

Dr. Stephen Hahn, who was Food and Drug Administration commissioner, says his relationship with Azar was “strained” after the Health Secretary revoked the FDA’s power to regulate Coronavirus tests: “That was a line in the sand for me.”

The evaluations will be broadcast by CNN in a special report this Friday.

First, I wanted to make sure that we stopped saying that the risk to Americans was low. I could see the avalanche coming, and I could see that we were not prepared, and I thought I could do something….

I look at it this way. The first time, we have an excuse. There were about 100,000 deaths that came from that original surge. All of the rest of them, in my mind, could have been mitigated or decreased substantially.

The former Coronavirus coordinator spoke of her decision in August to defy Trump and tour the country — speaking to state and local leaders about masks, social distancing, and other public health measures — after a “very uncomfortable, very direct, and very difficult” phone call with Trump.

Trump berated Birx after a CNN report in which she spoke about the scale of the pandemic. “I got called by the President,” she recalled.

Asked, “Were you threatened?”, Birx responded, “I would say it was a very uncomfortable conversation….Everybody in the White House was upset with that interview.”

She added that Trump advisors prevented her from getting out the message:

Clearly someone was blocking me from doing it. My understanding was I could not be national because the President might see it.

[Trump] felt very strongly that I misrepresented the pandemic in the United States, that I made it out to be much worse than it is. I feel like I didn’t even make it out as bad as it was.

The former officials, including Redfield and Giroir, said testing was further inhibited by White House officials who said it made Trump look bad by raising the number of confirmed cases.

Giroir said the Administration lied about the availability of testing: “When we said there were millions of tests — there weren’t, right? There were components of the test available but not the full deal.”

Birx explained that, alongside Trump’s denial of the Coronavirus threat, “There was a group that really believed this wasn’t as a big of deal as we were making it. Then there was the other group that just was more fatalistic, that no matter what we did, the outcome was going to be the same.”

Because “the President was not supportive of mask-wearing in the White House…it was made clear that they didn’t want us wearing masks” at an event in the Rose Garden.

“So all of the Cabinet officials and even some of the military members took their masks off. Dr. Fauci and I did not.”

Meanwhile, Health Secretary Azar was pressuring the CDC to change research findings and recommendations, according to former CDC Director Redfield:

The challenges I had were with the office of the Secretary. I think some of the ones that were the most notable, that I was the most offended by, was the calls that wanted me to pressure and change the MMWR [Morbidity and Mortality Weekly Report].

Redfield said he was asked to change the report “on more than one occasion”.

The Damage of Herd Immunity

She said that as Atlas promoted “herd immunity” by letting the virus spread, “I told people I would not be in a meeting with Dr. Atlas again. I felt very strongly that I didn’t want an action that legitimized in any way his position.”

Day one when he showed up that was very clear it was written as his view….He thought you can protect the vulnerable and let sort of the well build up this herd immunity.

Dr. Birx and I and the rest of the docs said, “This is a fallacy.”

Fauci referred to an earlier episode, in the spring, when Trump demanded that Coronavirus measured be removed to “reopen” the country.

He recalled that the message was “a punch to the chest”: “I said to myself, ‘Oh my goodness, what is going on here?’ It shocked me because it was such a jolt to what we were trying to do.”