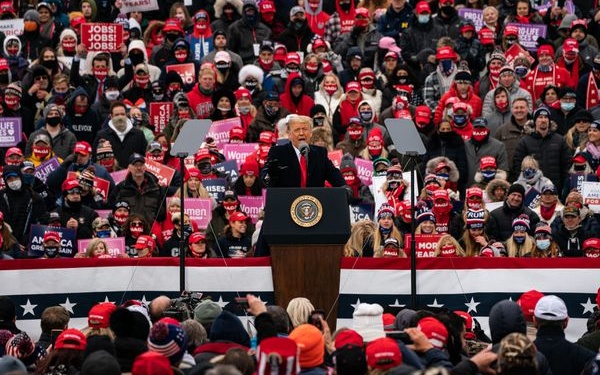 Responding to a “Fire Fauci” chant at his Sunday campaign appearance, Trump said, “Don’t tell anybody, but let me wait until a little bit after the election.”

After he bathes in a "Fire Fauci" chant for 18 seconds, President Trump says, "Don't tell anybody, but let me wait until a little bit after the election." pic.twitter.com/DBb9kyaFhU

I recently did an interview with RT and was unaware they are a registered foreign agent. I regret doing the interview and apologize for allowing myself to be taken advantage of. I especially apologize to the national security community who is working hard to defend us.

We’re in for a whole lot of hurt. It’s not a good situation.

All the stars are aligned in the wrong place as you go into the fall and winter season, with people congregating at home indoors. You could not possibly be positioned more poorly.

Meanwhile, Donald Trump’s medical confidante Dr. Scott Atlas — who has no experience in epidemiology, but who has been a Fox TV commentator — was appearing on another pro-Trump channel, Russian State outlet RT, to promote “herd immunity” and denounce medical and public health experts.

Fauci said of Atlas in his interview with the Washington Post:

ORIGINAL ENTRY: A public health study of 18 rallies for Donald Trump concludes that they led to more than 30,000 Coronavirus cases and more than 700 deaths.

The Stanford University researchers examined communities for 10 weeks after the rallies, using regression models, demographics, and the trajectory of COVID-19 cases in similar counties.

They conclude that Trump’s events, defying the advice of medical and public health experts, “increased subsequent confirmed cases of COVID-19 by more than 250 per 100,000 residents”.

Our analysis strongly supports the warnings and recommendations of public health officials
concerning the risk of COVID-19 transmission at large group gatherings, particularly when the
degree of compliance with guidelines concerning the use of masks and social distancing is low. The
communities in which Trump rallies took place paid a high price in terms of disease and death.

The survey established that 14 of the host counties had an increased rate of new Coronavirus cases one month after the Trump events between August 17 and September 26.

Demanding the “reopening” of the US, despite the guidance of Government experts over the pandemic, Trump resumed his rallies on June 20 in Tulsa, Oklahoma. The event sparked a surge of cases in the Tulsa area and throughout the state, which had suffered less than other US areas in the first wave of the virus. One prominent attendee, former GOP Presidential candidate Herman Cain, died on July 30.

Trump’s appearances were again halted, but largely because the rally filled less than 7,000 of almost 20,000 seats in the arena.

However, in August, Trump renewed them with a vengeance, as he trailed Democratic Presidential nominee Joe Biden in polls. From a White House event for the Republican National Convention to gatherings across the US, there has been no social distancing and few attendees wearing masks.

Campaigning in Detroit, Michigan on Saturday, Biden challenged Trump’s ongoing denial of the virus’s threat and mocking of medical and public health measures:

Biden: "Imagine where we'd be if we had a president who had worn a mask instead of mocked it?…we wouldn't have 230,000 deaths…he suggested these doctors were falsely inflating deaths due to Covid because they want to make money. What in the hell is the matter with this man?" pic.twitter.com/k2JghblyAq