Coronavirus: Biden Calls for Restoration of Mask Mandates Amid Concern Over New Surge 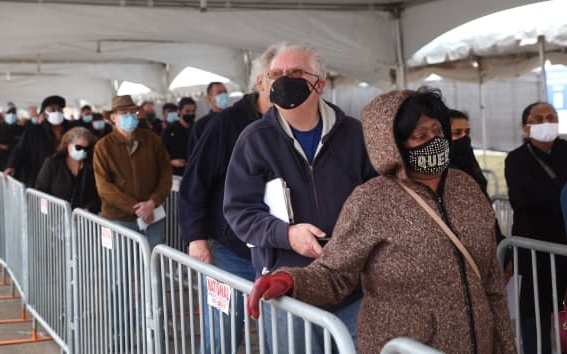 President Joe Biden calls on state and local leaders to restore Coronavirus mask mandates, as the director of the Centers for Disease Control and Prevention warns of “impending doom” from another surge.

Since Biden took office on January 20, almost 130 million vaccine doses have been administered, bringing the US total to 146 million. The President has set a goal of May 1 for all US adults to receive at least one dose.

CDC Director Rochelle Walensky, holding back tears, asked Americans to “hold on a little while longer” and observe Coronavirus measures.

“We have so much to look forward to, so much promise and potential of where we are, and so much reason for hope, but right now, I’m scared,” she said.

A CDC report released Monday confirmed the effectiveness of the Pfizer/BioNTech and Moderna vaccines, preventing both symptomatic and asymptomatic cases “in real world conditions”.

But public health experts say there is a race in the US between mass vaccination — which reached 3.3 million on Sunday — and the spread of dangerous variants of the virus.

Some state leaders, such as Texas Gov. Greg Abbott and Mississippi Gov. Tate Reeves, have defied the guidance to lift mask mandates

Biden reported new steps to expand vaccine eligibility and access, including a dozen new mass vaccination centers. He said steps are being implemented so 90% of Americans are no farther than five miles from a vaccination site by April 19.