Bollywood Dismisses India’s Protesters: “They Are Not Farmers. They Are Terrorists” 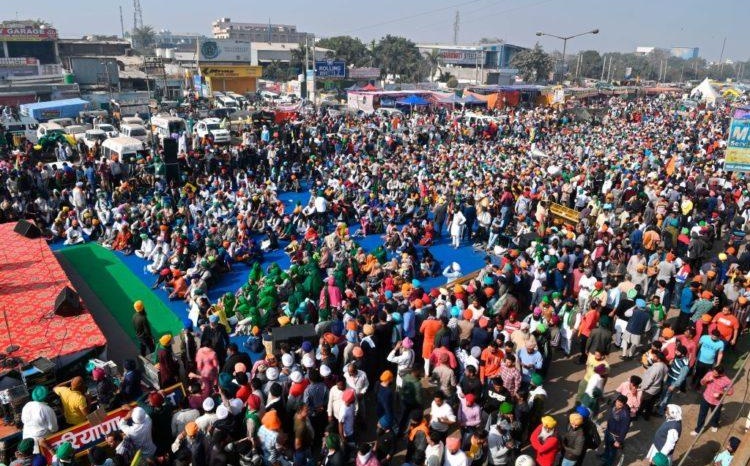 The message from Barbadian singer Rihanna raced across Indian social media, “Why aren’t we talking about this?!”

The tweet highlighted a CNN report on Indian authorities cutting the Internet, hoping to limit information about camps where tens of thousands of farmers have protested since November.

The farmers, mainly Sikhs in northern India, have been challenging Government changes in rules around selling, pricing, and storage of farm produce. Seeing the rules as decades-long protections, tens of thousands of farmers have travelled to the capital Delhi, and there have been clashes with the police. Farmers unions warn that the Government’s measures are an opportunity for big corporates to control every aspect of agriculture, in which more than half of India’s 1.3 billion population work.

Almost one million people retweeted Rihanna’s message, and 364,000 liked it. Swedish climate activist Greta Thunberg gave support: “We stand in solidarity with the #FarmersProtest in India.” Meena Harris, a niece of US Vice President Kamala Harris and great-niece of the Vice President’s Indian-born mother, did so as well.

But the interventions wer not welcomed by the Modi Government, who called them “sensationalist”, or by Rihanna’s celebrity compatriots in India’s music, film, and sports communities. Hard-right accounts, defending the Modi Government, questioned the singer’s motives and even dug out old pictures of her being abused by former partner Chris Brown.

Actress Kangana Ranaut blasted, “No one is talking about it because they are not farmers they are terrorists who are trying to divide India, so that China can take over our vulnerable broken nation and make it a Chinese colony much like USA….Sit down you fool, we are not selling our nation like you dummies.”

Bollywood A-list actor Akhshay Kumar tried a more conciliatory approach over the protests, while supporting the Government and chiding Rihanna, Thunberg, and Harris:

Farmers constitute an extremely important part of our country. And the efforts being undertaken to resolve their issues are evident. Let’s support an amicable resolution, rather than paying attention to anyone creating differences. 🙏🏻#IndiaTogether #IndiaAgainstPropaganda.

Don’t fall for any false propaganda against India or Indian policies. Its important to stand united at this hour w/o any infighting 🙏🏼#IndiaTogether #IndiaAgainstPropaganda

There were those who dissented. Actress Sonakshi Sinha, the daughter of veteran actor and politician Shatrungha Sinha, wrote on Instagram:

To reiterate, news tonight will try to paint a picture that ‘outside forces’ are trying to meddle in the functioning of our country. Please don’t give in to that narrative. It’s human, standing up for other humans. THAT’S the narrative.

Actress Taapsee Pannu, who has supported the farmers, wrote, “If one tweet rattles your unity, one joke rattles your faith or one show rattles your religious belief then it’s you who has to work on strengthening your value system not become ‘propaganda teacher’ for others.”

But Sinha and Pannu are contending with the Bollywood royalty who have either given fervent backing to the Government or stayed silent on the issue. And this is the rule, rather than the exception, during the years of Prime Minister Narendra Modi and his right-wing Hindu nationalist Bharatiya Janata Party.

There has been no Bollywood response about the increase in lynching and killings of Muslims in certain states. Nothing was said when students at Jamia Milla University protested that the Citizenship Amendment Act is directed against Muslim. There was not a peep when Indian forces more or less turned Kashmir into a militarized zone and cut off the State from the rest of the world. Meanwhile, blockbuster movies promoted loyalty with biopics of Modi and other iconic Hindutva figures like the Maharashtrian politician Bal Thackeray.

If a Bollywood star does speak out, the consequences can be brutal. In 2006, Aamir Khan’s movie “Fanaa” was blocked from release in the state of Gujarat, simply because he supported activists in their fight against raising the height of the Sardar Sarovar Dam. Khan’s effigy was burnt and cinema houses were attacked if they even put up a poster for the film. Comments on social media questioned Khan’s loyalty to India and blamed his Muslim faith. So fast forward to 2021 in the height of social media and what is wrong with it, imagine the same scenario being played out now?

Last year A-list actress Deepika Padukone visited a vigil at Jawaharlal Nehru University in solidarity with students protesting against attacks on them by security forces. Padukone stood in silence at the event, but was assailed with abuse and hate on social media.

The site Bhakts quickly branded Padukone’s visit as a show of support to those protesting against the divisive Citizen Amendment Act. She was accused of being a Pakistani agent, and received rape and death threats, and was the target of a drugs investigation by the Narcotics Control Bureau. Even though she was not charged, the trolling and investigation were more a warning to her and anyone else who might take a public stance.

Since 2014 the Hindu nationalist Modi Government has sought to mold India through the promotion of Hindutva ideology. Bollywood has profited through movie exalting “India”. Its leading figures have posed with Modi to further enhance their appeal. Fans have been encouraged to sign up to the BJP and accept, or at least turn a blind eye towards, the elements who are no longer on the fringe as they push Hindutva ideology. The alternative — questioning the Government or supporting, even silently, those who feel they have suffered from it — risks social media intimidation, burning effigies, and the drying up of film offers.

It would be naive to expect divine intervention from a Bollywood icon against discrimination, harassment, or even a lynching. It is unsurprising that those who do intervene, especially those from abroad, are denounced.

In their 1975 blockbuster Sholay, the iconic Jai and Veeru defeat the villain Gabbar Singh. There will be no Bollywood repeat with Narendra Modi — the superstar on the screen will have to be replaced by the man and woman on the street.