Biden: “The People We Lost Were Extraordinary” 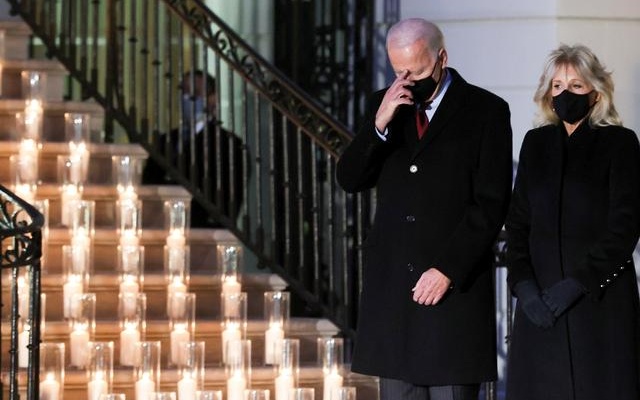 President Joe Biden leads the nation in mourning as the US passes 500,000 Coronavirus deaths.

In an address to the nation, Biden said:

We often heard people described as ordinary Americans. There’s no such thing. There’w nothing ordinary about them. The people we lost were extraordinary.

He combined remembrance with the call “to remain vigilant” and to seek optimism for recovery:

Let this not be a story of how far we fell, but how far we climbed back up. We can do this.

Daily deaths are declining sharply from a record high of 4,103 on January 27, and daily cases are down almost 75% from a peak of almost 260,000 on January 8. Hospitalizations have fallen more than 50% since last month.

The Administration has raised vaccinations to 1.32 million per day over the past week. More than 63 million doses have been administered, with more than 13% of Americans receiving a first jab and almost 6% fully covered.

Biden added to the effort with the invocation to avoid division and falsehood.

We must end the politics of misinformation that’s divided families, communities and the country; that’s cost too many lives already.

It’s not Democrats or Republicans who are dying from the virus. It’s our fellow Americans, it’s our neighbors. It’s our friends, our mothers, our fathers, our daughters, husbands, wives. We have to fight this together as one people, as the United States of America.

That’s the only way we’re going to beat this virus, I promise you.

The National Cathedral rang its bells 500 times to mark the toll. The White House was lit by 500 candles as Biden, Vice President Kamala Harris, and their partners Jill Biden and Doug Emhoff joined a moment of silence.

Biden said in his address, “As a nation, we can’t accept such a cruel fate. While we’ve been fighting this pandemic for so long, we have to resist becoming numb to the sorrow.”