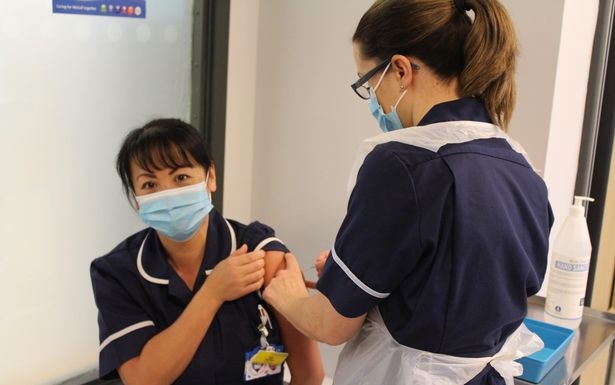 A nurse vaccinates a colleague in Walsall — the town, with a large South Asian population, has one of the highest Coronavirus death rates in the UK

As the rollout of the UK’s coronavirus vaccines gathers pace, there are concerns that some in the BAME community do not believe the inoculations will save lives.

Reasons for hesitancy include disinformation, lack of faith in the those advocate the need for vaccination, and forms of structural and institutional racism and discrimination. All of these can be damaging or even fatal for those in a community which is more likely to suffer and die from Coronavirus than others in the UK.

While much of the disinformation is being spread by far right groups, within the Muslim community there are people who are peddling the fake news that the vaccine might contain gelatine or other animal products and therefore is not halal. There are even claims that the inoculations can alter DNA.

Despite a death toll of more than 85,000, GPs are noticing some of their South Asian patients are refusing the vaccine when it is offered. One doctor told me that he was overruled by family members who have no medical qualifications, telling relatives that the vaccine has not been proven to be effective and, in one case, that it can kill.

Dr. Harpreet Sood is leading an NHS anti-disinformation drive. She told the BBC that it is “a big concern” and officials are working “to correct so much fake news” in the face of language and cultural barriers.

Nevertheless, there is now an effective campaign urging BAME communities to take the vaccine. Leading Muslim figures such as Sheikh Yunus Dudhwala — an imam and chaplain working with the British Islamic Medical Association and the Muslim Council of Britain — are posting Facebook videos of themselves being inoculated. Sheikh Nuru Mohammed, an Imam and co-chair of Birmingham Citizens UK used the hashtags #notofakenews and #yestovaccine alongside the photo of his vaccination.

As I wrote last month, to overcome the anti-vaccination movement, “the Government and the media need to use precise, factual language, foregrounding information about the vaccine and its significance rather than the negative of deriding scepticism”.

Engaging with the Anti-Vaxxers Over a Coronavirus Vaccine

But Dr. Samara Afzal, vaccinating patients in Dudley in the West Midlands, speaks of the scale of the challenge:

We’ve been calling all patients and booking them in for vaccines but the admin staff say when they call a lot of the South Asian patients they decline and refuse to have the vaccination.

Talking to friends and family, I have found the same. I’ve had friends calling me telling me to convince their parents or their grandparents to have the vaccination because other family members have convinced them not to have it.

So how to deal with the disinformation?

But in the end, there has to be an emphasis on “vaccine literacy”, circulating guidance for the consideration of any claim.

Who sent you the news? Is it factual and reliable? If you’re reading Russia Today’s derision of the Pfizer/BioNTech vaccine, understand that Moscow is playing a game for its version.

Who has more expertise? Your friend who believes we will all have a chip in our bodies, so we are controlled by Bill Gates, or a doctor or public health expert?

Photos circulated of the Mayor of London, Sadiq Khan, receiving a vaccine with the cap still on the needle — a suggestion that the scene was staged.

But look closer: the photo was taken ahead of a flu jab. You can see the pharmacist preparing the site of the injection on Khan’s upper arm as he adjusts the mayor’s shirt sleeve.

Use the NHS websites. Ask those with expertise and understanding who can provide answers for questions.

5. Don’t Forward Every Message or Opinion

We live in a culture where some people like to be first at everything. WhatsApp warriors are among them. If an assertion isn’t verified, don’t send it and break the cycle of disinformation.

When frontline medics are trying to save lives, when NHS staff are pursuing the largest vaccination rollout in history, do we need the diversion of “Coronavirus Linked to 5G Masts”?

7. We Can Admit When We Are Wrong

End the burden of holding on to opinions that can be proved wrong. Accepting a mistake is a strength — and that acceptance could save the life of someone we love dearly.