Engaging with the Anti-Vaxxers Over a Coronavirus Vaccine 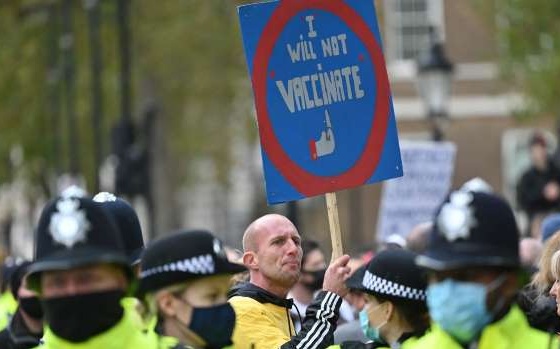 Finally some good news — the UK has become the first country in the world to approve the Pfizer/BioNTech Coronavirus vaccine, paving the way for mass inoculation to curb the pandemic.

The UK’s Medicines and Healthcare Regulatory Agency says the jab, which offers up to 95% protection against Covid-19, is safe enough to be rolled out. The first 800,000 doses will be available in the UK from next week.

It’s a cause for celebration after the virus has destroyed families, care homes, towns, cities, and countries.

But not for many people on social media platforms. Posts by anti-vaccine fringe groups, which may then be circulated by your friends and relatives on Facebook and Instagram, portray the end of the world as we are controlled by villains like Microsoft’s Bill Gates, UK Labour leader Keir Starmer, and the financier and philanthropist George Soros.

Message boards, websites and radio call-ins have been flooded by those who say they won’t be taking any vaccine. James O’Brien, the LBC host often represented as the voice of Liberal Britain, was confronted by one caller that he would not be vaccinated because he is “going to survive regardless” — and then express outrage at the thought of an “immunity passport”.

Anti-vaccination theories have been around as long as modern vaccines. But in recent years, the anti-vax movement has gained traction online with social media posts pushing unfounded claims.

In 2019, as the movement surged, the UK lost its measles-free status, designated by the World Health Organization, with – and a marked decline in vaccination rates for all 13 diseases covered in jabs for children. Now, as Britain’s official death toll nears 60,000, the anti-vaxxers are ready to take down the UK and global system to stem the fatalities.

And they are already making advances. A recent YouGov survey found that 21% of adults are unlikely to take a vaccine, and a further 12% are unsure. That means a third of the country could abstain in a situation where full take-up is needed to stop the pandemic.

The Deployment of Facts and Dialogue

The snap response may be to brandish the anti-vaxxers as stupid, ill-informed, and reckless. But is that tactic constructive?

In 2016, those favoring the UK remaining in the EU — citing the political, economic, and social costs of departure — sometimes branded Leave as ignorant or delusional. Those who were concerned about damage to the US system might say the same about Trump supporters. But by November 2016, Brexit was approved and Trump was on his way to the White House.

We are living in a society where, in the view of Barack Obama, “The truth doesn’t even matter….It has now become a contest where issues, facts, policies per se don’t matter as much as identity and wanting to beat the other guy.”

The answer is not to brand anti-vaxxers, follow UK Prime Minister Boris Johnson’s lead, as “nuts” — particular when Johnson and his allies led a tirade in 2016 against “experts”.

Instead, dialogue, facts, reason, and understanding should be deployed. But how?

In the echo chambers within social media, the obstacle of “confirmation bias” — “actively seeking out and assigning more weight to evidence that confirms their hypothesis, and ignoring or underweighing evidence that could disconfirm their hypothesis” — is a tall one. About 70% of those who voted for Donald Trump believe massive electoral fraud took place in November’s election, refusing to believe the facts from the Justice Department, the Department of Homeland Security, and officials in states across the US about the “most secure” ballot in recent US history.

I would never engage in a Coronavirus debate with anyone who is so embedded that he/she prefers the expertise of an acquaintance or a unsupported Facebook claim over, say, Prof. Devi Sridhar, the chair of global public health at the University of Edinburgh. But if there is a chance to present reason and facts, as well as personal experience, then engagement can be productive — if people feel valued and trusted, they are more likely to listen.

Language and messaging will be in dealing with anti-vaxxer rhetoric. The Government and the media need to use precise, factual language, foregrounding information about the vaccine and its significance rather than the negative of deriding scepticism.

The “normal” of the story should be explaining through the everyday people taking the vaccine and through the science and expertise to justify the rollouts, while answering rather than belittling doubts. At the same time, social media companies such as Facebook, Twitter, and Google need to act in a responsible manner where the anti-vaccine claims are not amplified but are met with facts and explanation.

Getting Out Front with Reality

As the first jabs are administered in the UK, there is no time to be lost. The Center for Countering Digital Hate found that the anti-vaccination movement has gained about 8 million followers since 2019. Anti-vax accounts command more than 31 million Facebook followers, almost 17 million subscribers on YouTube, 7 million on Instagram, and 2 million followers on Twitter.

In November the social media platforms, including Google, Twitter, and Facebook finally agreed to limit the spread of false claims. The UK Government’s Cabinet Office in creating a rapid response unit to sniff out the disinformation.

But while the steps are welcome, they are not enough. As reactive measures, they can only have effect after the damaging falsehoods and conspiracy theories have circulated.

To move from control of a pandemic to removing it, the measures have to be active — vaccinating the populace — rather than chasing the spread.

The same is true of the information battle. We have to shift from trying to contain the disinformation to acting in advance of it. We have to establish reality and engage throughout our communities — including with anti-vaxxers — to ensure that it, rather than the unreal alternatives, is our starting point.