The UK Conservatives Who Loved Trump: Was It Worth It? 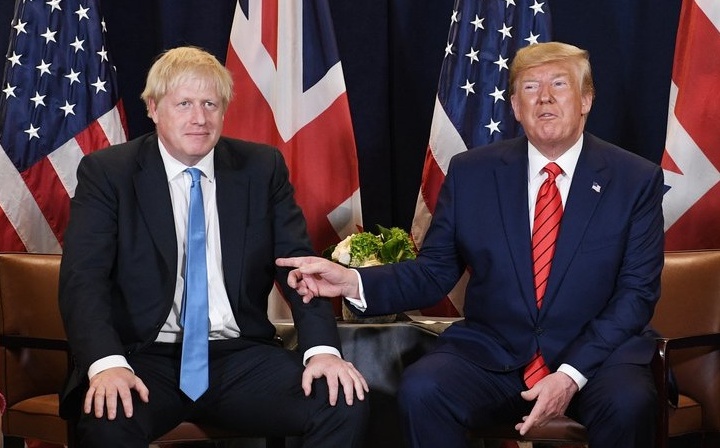 A Donald Trump supporter said about the man in 2018: “I am increasingly admiring of Donald Trump. I have become more and more convinced that there is method in his madness.”

The admirer was so besotted that he said of Trump in the same year: “If he can fix North Korea and the Iran nuclear deal, then I don’t see why he’s any less of a candidate for the Nobel Peace Prize than Barack Obama, who got it before he even did anything.”

Another fan, asked in 2016 if he would choose Trump, replied: “I would almost certainly vote Republican if I were in America.” In 2018, he urged his fellow Britons to “lay out the reddest of red carpets” for the President and “treat him with the greatest respect and courtesy” when The Donald came to the UK on a State visit.

And even though Trump has lost the 2020 election, even though he has tried to overturn this with baseless accusations of voter fraud – he still has a following. One follower tweeted a meme showing Trump as the American Eagle, wrestling back the flag from President-elect Joe Biden, depicted as Communism rising from the dead.

Donald Trump could do no harm. Even when he introduced the Muslim Travel Ban in 2017, one supporter said:

He is not a serious threat of harm to our society in any way. The uproar is largely because he is rich, white and politically incorrect, and that, to me, is really the crux of the issue.

He cheered in the same year: “I think that we should celebrate politicians who stand up and say things that are unpopular and controversial.”

Or rather step back. For in the days since Donald Trump tried to stage an insurrection, urging his diehard MAGA troops to march onto Capitol Hill, these Conservatives have either sent damp squib condemnations or gone into hiding with a frenzy of silence.

They had stood by and allowed Trump to insult men, women, Latinos, Muslims, and those who are transgender; to lie constantly; to undermine fellow world leaders; and to destroy the tenets of democracy by treating the likes of Vladimir Putin and other authoritarian leaders as his natural allies. Now they stood by as he incited an assault on the US seat of government.

On Thursday, Home Secretary Priti Patel broke the awkward quiet, telling the BBC: “His comments directly led to the violence. So far he has failed to condemn that violence and that is completely wrong.”

Boris Johnson, once described as Britain’s Trump by Trump himself, initially limited himself to a tweet that didn’t mention his mentor:

Disgraceful scenes in U.S. Congress. The United States stands for democracy around the world and it is now vital that there should be a peaceful and orderly transfer of power.

That’s it? Not a word of direct criticism of Trump. No condemnation of the incitement. No recognition that this is the culmination of 4 yrs of division, lies and contempt. 4 yrs when our own Britain Trump (as the President called him) has behaved like a shameful sycophant.

So on Thursday, in his typical manner of watching which way the crowd is running and then heading to the front, Johnson said:

In so far as he encouraged people to storm the Capitol and insofar as the President has consistently cast doubt on the free and fair election, I think that what the President has been saying is completely wrong.

I unreservedly condemn encouraging people to behave in the disgraceful way as they did in the Capitol.

The belated criticism was a mirror of the Tory inner circle’s reaction in November. On the day that Joe Biden was declared the winner of the election, Foreign Secretary Dominic Raab congratulated the victor but quickly praised Trump for a hard-fought campaign, even though Trump was already hurling baseless accusations of voter fraud.

Now as the dust has settled, Johnson’s allies in the media are trying to rewrite his past relationship with Trump. James Forsyth in the Times wrote, “Johnson is Not Trump’s Transatlantic Twin“, prompting the response of David Henig, Vice President of the European Centre For International Political Economy to tweet about the German Chancellor:

Angela Merkel doesn't need articles written on why she isn't like President Trump.

A Brexit Devotion to Trump

Why did the Government praise an unstable, ill-informed leader with despotic tendencies?

During the Government of Theresa May from July 2016 to July 2019 and then under Johnson, the goal was not to fall out with Trump so a post-Brexit UK could pursue a potential trade deal with the US. The Government chipped away at public opposition to ensure a state visit for Trump and his entire family in June 2019. It accepted the humiliation of US withdrawal from the Iran deal and bullying over the Chinese company Huawei’s role in 5G, as well as Trump’s public belittling of May’s approach to negotiations with the European Union.

The appeasement of Trump sank to a new low in July 2019 when the Government declined to stand by the UK Ambassador to Washington Kim Darroch, after his criticism of Trump’s personality, in cables two years earlier, was leaked. The documents rightly predicted that the Trump Administration would be dysfunctional, unpredictable, clumsy, and inept, but Darroch was forced into resignation

The Conservative Party historically are aligned to the Republican Party, and there have been close relationships such as Prime Minister Margaret Thatcher and President Ronald Reagan. But the Trump love is different — there is an affinity for the Trumpian politics that is based more on spectacle than policies.

Jacob Rees-Mogg conferred with Steve Bannon, Trump’s former campaign manager and chief strategist, in December 2017 about “how conservative movements can win in the US and UK”. Five months later, Rees-Mogg wrote:

It is our national good fortune that the President with whom we will develop this new arrangement is Mr Trump. His election depended upon similar factors to those that led to Brexit. He appealed to voters left behind by the metropolitan elite and he exudes confidence about his own nation and a determination not to be a manager of decline, which also inspires the Brexiteers.

Quoting the former Conservative Prime Minister Harold Macmillan, Rees-Mogg declared that the UK could play the role of Greeks to the Americans’ Romans — a remark that has disappeared as Trump’s Rome burns.

Edmund Burke wrote, “The only thing necessary for the triumph of evil is for good men to do nothing.” Whether or not the Conservatives are good men, many of them have done nothing with respect to Donald Trump. The silence has aided and abetted a blind loyalty to a racist, narcissist, misogynist, egotistical, dictator-loving, democracy-hating zealot.

What is more, fulfilling Hannah Arendt’s observation in The Origins of Totalitarianism of “propaganda…marked by its extreme contempt for facts”, the UK’s political leaders have lifted from the Trump playbook with a sneering expertise and a willingness to be “economical with the truth”.

Still, spare a thought for Cabinet Minister Michael Gove. In 2019, as he was running to become Conservative leader and thus Prime Minister, his supporters claimed the advantage that Gove could work with Trump because they know each other well.

Gove, then a journalist with The Times, scored the first British interview with Trump after the 2016 US election. Following the encounter, Gove turned out a puff piece exalting the President-elect: “Mr Trump’s number-rich analysis of defence spending reflects a businessman’s ability to cut through jargon to get to the essentials of a case.”

Gove hailed Trump as the “the master of the profit and loss accounts” and a “determined negotiator”, as they supposedly bonded about their shared Scottish heritage. The journalist ended the interview by posing with his subject, both giving a thumbs-up. 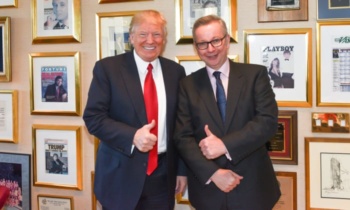 Yet when Trump was asked about Gove during the Conservative leadership election in 2019, he replied, “I don’t know him.”

After five years bending over backwards for a vain man who only cares about himself, is there anyone in 10 Downing Street or on the Tory benches in Parliament asking, “Was it worth it?”