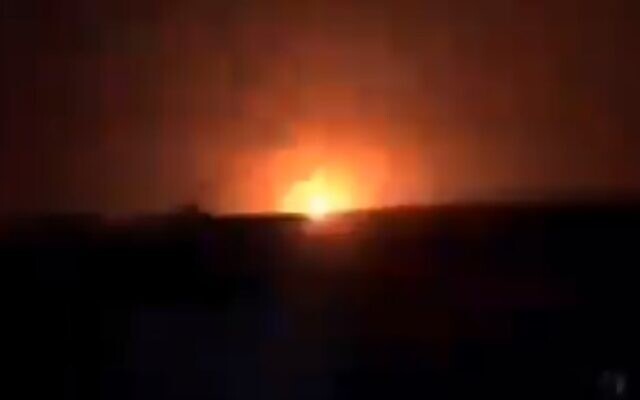 Claimed image of an Israeli airstrike on al-Bukamal, in eastern Syria near the Iraq border, January 13, 2021

The claimed death toll from Wednesday’s Israeli strikes on Iranian positions in eastern Syria has risen to 57.

Sources said the Fatimid Brigade had transported Iranian-manufactured weapons across the Iraq border in recent days.

Without acknowledging the casualties, the Assad regime’s Foreign Ministry claimed “flagrant Israeli aggression” was coordinated with the “criminal practices” of the US-supported, Kurdish-led Syrian Democratic Forces.

The regime, proclaiming that it will “retake every inch” of Syria, is pressing for an end to the Kurdish autonomous administration in the northeast.

Using the blog Al Masdar, the regime’s military said one of its troops was killed and 12 wounded.

The military official said several pro-Assad militiamen were also slain, but insisted that “claims about the Iranian casualties are nothing more than rumors spread by opposition activists”.

Assad regime media confirmed the strikes after midnight, saying an assessment of damage and casualties is being carried out.

The missile attack was the fourth by Israel against Iranian and regime targets in the past two weeks, including a strike on an Iranian base west of Damascus last Wednesday.

On Christmas Daym the Israelis struck the Assad regime’s main complex for development of conventional and chemical weapons, the Scientific Studies Research Center, in Masyaf in Hama Province. The attack destroyed four buildings “probably used for mixing and casting components of missile engines and warheads”.

Wednesday’s targets were in the al-Bukamal area of Deir ez-Zor Province, where there are large bases for Iran-supported foreign militias.

Throughout Syria’s 114-month conflict, Israel has regularly struck regime and Iranian positions, targeting the links with Hezbollah and pressuring Iran to withdraw its forces and the foreign militias.