“Something That Was Not Normal”: Georgia Elections Official on Trump’s Shakedown 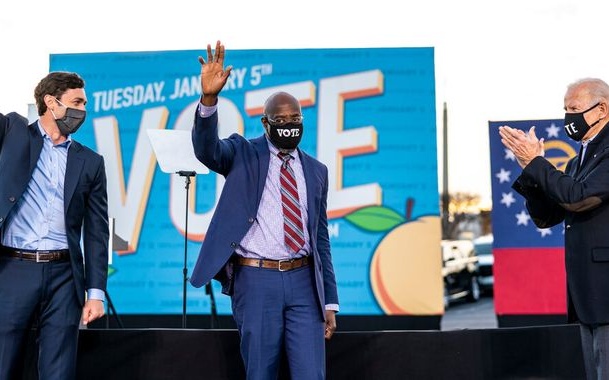 Sterling, the voting system implementation manager, gave a point-by-point rebuttal of Trump’s disinformation and false claims in a Saturday call to Secretary of State Brad Raffensperger, a fellow Republican.

With wild claims of forgeries, ballot stealing, and “I won by half a million votes”, Trump demanded of Raffensperger, “I just want to find 11,780 votes, which is one more than we have because we won the state.”

“Find the Votes”: Trump’s Hour-Long Shakedown of Georgia Officials
EA on TRT World, Monocle 24, and The Pat Kenny Show: The Trumpists Try to Shake Down US Democracy

Sterling said at a Monday afternoon news conference that Trump’s allegations of fraud were “thoroughly debunked”.

I wanted to scream….I personally found it to be something that was not normal, out of place, and nobody I know who would be president would do something like that to a Secretary of State.

On Tuesday, Georgia holds run-off Senate votes that will determine either a Republican or Democratic majority in the chamber. GOP Sens. Kelly Loeffler and David Perdue are challenged by Democrats Raphael Warnock and Jon Ossoff in races that are too close to call.

On Wednesday, 12 Republican Senators and more than 140 Representatives say they will not recognize President-elect Joe Biden when Congress convenes to confirm Biden’s 306-232 victory in the Electoral College.

The Fact Check board up next to the podium at this Georgia Secretary of State press conference. pic.twitter.com/gOTpWQlNpR

Biden: “Power Flows from The People”

Both Biden and Trump appeared at rallies on Monday in Georgia to back their parties’ Senate candidates.

The President-elect hailed Warnock, the pastor of Ebenezer Baptist Church in Atlanta, and Ossoff, the investigative journalist who almost became a US Representative in 2017.

Biden did not mention Trump’s attempted intimidation, including the threat of prosecution, of Secretary of State Raffensperger. However, he said politicians cannot “seize power”: “As our opposition friends are finding out, all power flows from the people.”

He told the crowd, “It’s not hyperbole, you can change America.”

Ossoff said at a rally of volunteers preparing to canvas voters: “The president of the United States on the phone trying to intimidate Georgia’s election officials to throw out your votes. Let’s send a message: Don’t come down to Georgia and try to mess with our voting rights.”

Trump quickly veered off script to repeat his falsehoods and conspiracy theories: “That was a rigged election, but we’re still fighting, and you’re going to see what’s going to happen.”

He insisted he won “by a landslide” and hinted that Vice President Mike Pence, presiding over Wednesday’s session of Congress, should intervene to help the Republican legislators refusing Biden as President: “He’s a great guy. Of course, if he doesn’t come through I won’t like him quite as much.”

Pence’s office has said the Vice President “welcomes the efforts of members of the House and Senate to use the authority they have under the law to raise objections”. However, he has no authority to block the votes in both chambers confirming Biden as 46th President.

Trump blasted Republican legislators who say they will uphold the Constitutional process in confirming Trump, including Sen. Mike Lee of Utah, who was in the audience.

He echoed his pressure on Ukraine for disinformation about Biden — a “perfect phone call” to President Volodomyr Zelenskiy which led to his impeachment and trial — with the presentation of Saturday’s hour-long confrontation of Raffensperger.

"Everyone loved my phone call" — Trump on his widely criticized phone call with the Georgia secretary of state in which he tried to bully him into helping him steal the election pic.twitter.com/ZpCoSIi1KO

If you’re a Georgia voter, if you want your values reflected by your elected officials, I strongly beg and encourage you, go vote tomorrow.

Do not let anybody discourage you. Do not self-suppress your own vote.