“Deception at a National Scale”: Problems with Coronavirus Vaccine Distribution 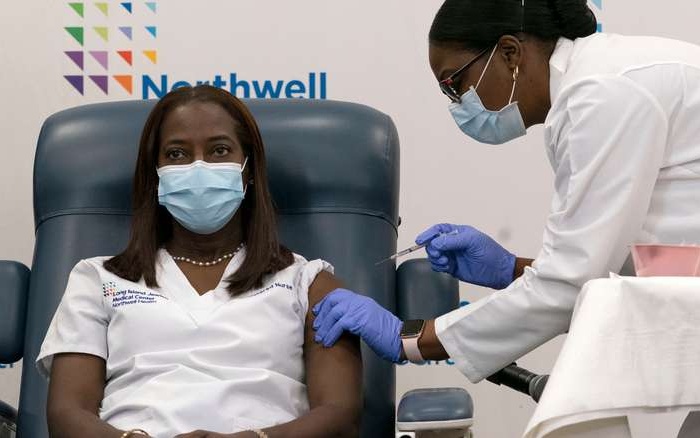 State and local leaders warn that Coronavirus vaccinations are being postponed, as problems mount with the Trump Administration’s distribution of doses.

Health and Human Services Secretary Alex Azar said this week that the Federal Government would begin releasing doses from a strategic reserve. However, State and Federal officials said no such reserve exists.

Asked on Friday if there was a stockpile for the second of two required doses, Azar admitted, “No. There’s not a reserve stockpile.”

Azar resigned on Tuesday over the Capitol attack instigated by Donald Trump. The letter was not released until Friday.

Trump officials pledged that 20 million vaccinations would be carried out by December 31. But as of Wednesday, only 11.1 million Americans had received the first dose, according to the Centers for Disease Control and Prevention.

The problem with the Administration’s Operation Warp Speed is unclear.

Pfizer, the manufacturer of one of two approved vaccines, said it has doses ready to deliver. A Government official insisted that there is a reserve providing a rolling and replenished supply, although there will not be a sudden surge in numbers of American vaccinated.

Michael Pratt, a spokesman for Operation Warp Speed, also denied that the reserve was “exhausted”: “This week, nearly 13 million total doses have been provided to states to order, millions more than other weeks, as the reserve of second doses is completely made available to order against.”

Oregon Gov. Kate Brown announced on Friday that the state will not receive more shipments of coronavirus vaccines from the national stockpile next week, forcing an adjustment to the rollout plan.

The Governor’s office had announced that senior citizens, child care providers, and school teachers and staff might be inoculated as soon as January 23. Now, people over 80 will be vaccinated from February 8.

Brown said the Administration’s declarations over the vaccine rollout were a “deception at a national scale”.

I am demanding answers from the Trump Administration. I am shocked and appalled that they have set an expectation on which they could not deliver, with such grave consequences.

I’m shocked we were lied to and there is no national reserve.Federal announcements that 2nd dose being held in reserve was going to be released led us to expect 210,000 doses next week,other Govs made similar https://t.co/ETVIqM0clH we find out we’ll only get 79,000 next week.

New York Mayor Bill de Blasio said the city will run out of vaccines next week without a resupply mission:

At this rate, there will not be any doses available in New York. If we don’t get a serious supply, we’re going to have to freeze the appointment system. That would be insane, after all the progress we’ve made.

Hospitals across New York have canceled and stopped scheduling appointments for jabs. New York University’s Langone Health alerted doctors that, after 30,000 inoculations to date, it has not been allocated doses for next week and cannot continue its vaccination program. Mount Sinai Medical Hospital said it had cancelled vaccinations from Friday through Tuesday.

New York State Gov. Andrew Cuomo said the state will receive 50,000 fewer doses next week, despite increasing the number of people eligible for inoculations. He said the Federal Government had called on states to provide vaccines to those 65 and older, but failed to increase allocations using reserve supplies as promised.

“They had already sent out everything they had, so there was no increase in supply and in the meantime there was a dramatic increase in the eligibility,” Cuomo explained.

President-elect Joe Biden, who included vaccine rollout in his $1.9 trillion “American Rescue Plan” on Thursday, gave details on Friday with a pledge to inoculate 100 million Americans in 100 days.

Get more people vaccinated for free. Create more places for them to get vaccinated. Mobilize more medical teams to get shots in people’s arms. Increase supply and get it out the door as soon as possible.

This will be one of the most challenging operational efforts ever undertaken by our country – but you have my word, we will manage the hell out of this operation.

Biden said pharmacies will be “activated” to distribute vaccines. CVS, one of the largest chains, immediately said that it is ready to distribute 1 million shots per day through 10,000 locations.

Calling the Trump Administration’s efforts a “dismal failure”, the President-elect said he will use the Defense Production Act, which allows the government to direct private suppliers to produce goods, to make vaccines, vaccination supplies, and personal protective equipment.

The rollout will be supported with “a massive public education campaign” and transparency over the vaccinations.