Biden at Coronavirus Memorial Service: “To Heal We Must Remember” 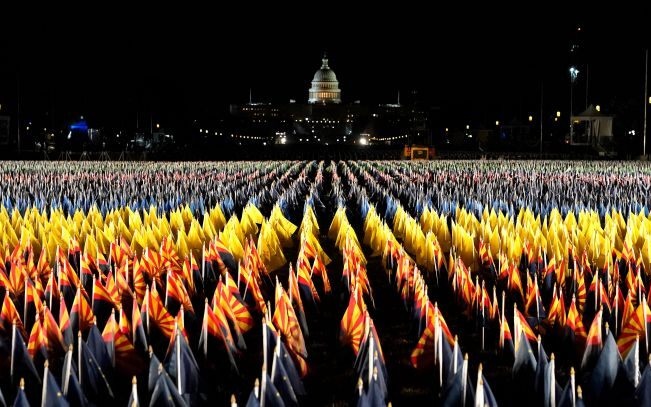 On the eve of his inauguration as 46th President of the US, Joe Biden says at a memorial service for more than 400,000 Coronavirus victims, “To heal, we must remember.”

Biden spoke at a sundown ceremony at the Lincoln Memorial:

It’s hard sometimes to remember. But that’s how we heal. It’s important to do that as a nation. That’s why we’re here today. Between sundown and dusk, let us shine the lights in the darkness along the sacred pool of reflection and remember all whom we lost.

The Washington National Cathedral rang its bells. Buildings from Miami to San Diego, including the Empire State Building in New York and the Space Needle in Seattle, were illuminated. People lit candles in their windows.

Tonight, we grieve and begin healing together. Though we may be physically separated, we, the American people, are united in spirit, and my abiding hope, my abiding prayer, is that we emerge from this ordeal with a new wisdom, to cherish simple moments, to imagine new possibilities, and to open our hearts just a little bit more to one another.

As he left his hometown of Wilmington, Delaware for Washington, Biden was emotional, wiping tears from his eyes. He spoke at a send-off ceremony at the Major Joseph R. “Beau” Biden III National Guard/Reserve Center, named for his son who died of brain cancer in 2015, and said he wished it was Beau who was becoming President.

It’s deeply personal that our next journey to Washington starts here, a place that defines the very best of who we are as Americans.

He continued, “Don’t tell me things can’t change. They can and they do. That’s America, that’s Delaware, a place of hope and light and limitless possibilities.”