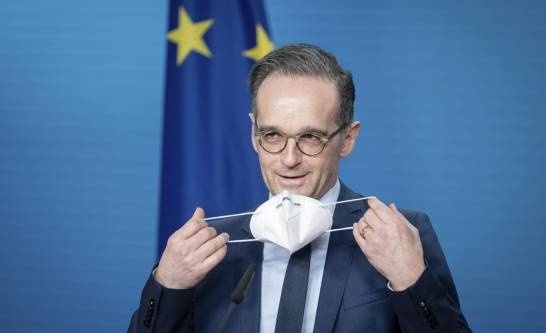 German Foreign Minister Heiko Maas: “This chance, this last window of opportunity, must not be wasted” (Kay Nietfeld/AP)

Iran and the remaining 5+1 Powers (UK, France, China, Russia, and Germany) have renewed their commitment to the 2015 nuclear deal — while avoiding the question of revision.

A joint statement said ministers “discussed that full and effective implementation of the JCPOA [Joint Comprehensive Plan of Action] by all remains crucial and discussed the need to address ongoing implementation challenges, including on nuclear non-proliferation and sanctions lifting commitments”.

The participants said the deal is a “key element” in the global non-proliferation regime and a diplomatic achievement contributing to regional and international peace.

The Trump Administration withdrew from the agreement in May 2018. It imposed comprehensive sanctions six months later and has extended the restrictions this year.

In response to the sanctions, Iran’s Rouhani Government has suspended adherence to the deal’s provisions. Its stock of 3.67% uranium is now 12 times the limit in the agreement. Enrichment has risen to 4.5%, and advanced uranium centrifuges have been installed.

However, Tehran has not returned to the pre-2015 level of 20% enriched uranium, which potentially can be enhanced to a military grade of more than 90%.

While upholding the deal, the UK, France, and Germany have called for talks over Iran’s missile program and the terminal dates for the agreement. Iran’s officials, including the Supreme Leader and President Hassan Rouhani, have firmly rejected any negotiations.

The issue has held up implementation of a European-Iranian economic link, INSTEX, launched by the European Union in January 2019.

Last Thursday, the head of the International Atomic Energy Agency, Rafael Grossi, supported revision: There is more [nuclear] material….There is more activity, there are more centrifuges, and more are being announced. So what happens with all this? This is the question for them at the political level to decide.”

The Foreign Ministers’ statement avoided any mention of revision. Instead, it said:

Ministers agreed to continue dialogue to ensure full JCPOA implementation by all sides.

Ministers acknowledged the prospect of a return of the US to the JCPOA and underlined their readiness to positively address this in a joint effort.

At Ministerial Meeting of remaining JCPOA participants, I emphasized:

3. E3 share the blame with US for irreparable harm to Iranians;

He reiterated, “Renegotiation is out of question”, and asserted, “The Iranian people MUST feel the effects of sanctions lifting.”

German Foreign Minister Heiko Maas called for restraint, with Iran avoiding further suspension of provisions to ease the way for US re-entry into the deal.

To make possible a rapprochement with the US under [President-elect] Biden, there should be no further tactical maneuvers of the kind we’ve seen too many of in the recent past. This chance, this last window of opportunity, must not be wasted.

Zarif issued the warning that the Rouhani Government must observe a Parliamentary bill mandating steps such as a return to 20% enrichment with 1,000 advanced IR-6 centrifuges: “‘Democracies’ cannot ask Iran to violate Parliamentary legislation.”