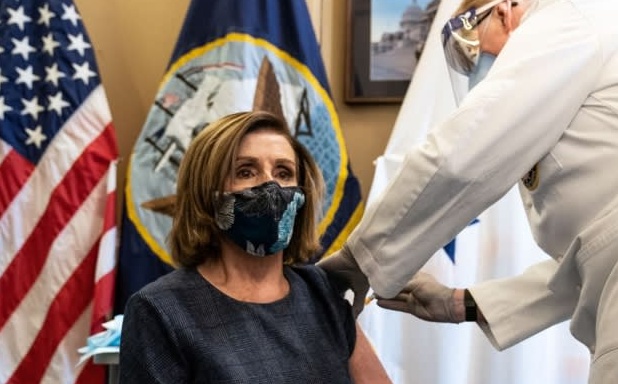 Donald Trump is threatening to veto the $900 billion Coronavirus relief bill passed by both houses of Congress on Monday night.

The threat was issued in an online video on Tuesday night. To compound problems for Republican legislators, Trump suggested an increase in the one-off payment to millions of Americans from $600 to $2,000. House Speaker Nancy Pelosi eagerly responded, “Let’s do it!”

Because the Coronavirus measures are part of a 5,593-page spending bill, a Trump veto would shut the Federal Government, the fourth time he has done so — including a record-setting 35-day halt in early 2019.

Even if Trump does not issue a veto, his refusal to sign the legislation would ensure that the bill expires when the current session of Congress ends on January 3. The process would have to start from scratch next year.

Almost 5 million people could be into poverty by the expiry of two expanded unemployment programs, according to Columbia University researchers.

Does the president realize that unemployment benefits expire the day after Christmas?

House Republicans sparred in a Wednesday conference call, many of them frustrated with Trump.

Minority Leader Rep. Kevin McCarthy told colleagues that he had spoken to Trump, who had not yet committed to a veto of the bill.

But McCarthy cautioned, “This bill has been tainted.”

Rep. Virginia Foxx said, “I don’t know if we recover from this. We will have a hell of a time getting this out of people’s heads.”

Rep. Don Bacon said Trump had thrown House Republicans under the bus. He said in a statement after the meeting, “I stand by what I said….The Covid supplemental [bill] is a good compromise, and the President should take it.”

In a rare moment of consensus, House Speaker Nancy Pelosi and Donald Trump agree that the one-off payment in the Coronavirus stimulus package should be increased from $600 to $2,000.

The two reached the accord from sharply different perspectives. In an online video, Trump railed at the $900 billion package, negotiated by Pelosi with other Republican and Democratic leaders in Congress, as a “disgrace”.

He assailed items in a broader spending plan, including funding of government operations and the military, as “wasteful and unnecessary”: “It’s called the Covid relief bill, but it has almost nothing to do with Covid. Congress found plenty of money for foreign countries, lobbyists and special interests while sending the bare minimum to the American people.”

The wider plan prevents the shutdown of the Federal Government. Funding authorization expired last Friday, but has been covered by a short-term extension adopted by both chambers of Congress.

Pelosi immediately welcomed the proposal to increase the one-off payment to millions of Americans.

Republicans repeatedly refused to say what amount the President wanted for direct checks. At last, the President has agreed to $2,000 — Democrats are ready to bring this to the Floor this week by unanimous consent. Let’s do it! https://t.co/Th4sztrpLV

Treasury Secretary Stephen Mnuchin, who negotiated the Coronavirus relief package with the legislators, scrambled to blunt Trump’s diatribe: “We are fully committed to ensuring that hardworking Americans get this vital support as quickly as possible and to further strengthening our economic recovery.”

He thanked Trump for “leadership”.

President-elect Joe Biden called the $900 billion an interim “down payment” and vowed a larger relief package soon after he takes office on January 20: “Congress did its job this week, and I can and I must ask them to do it again next year.”

Biden said there will be more funding to help firefighters, police officers, and nurses, as well as a new round of stimulus checks.

He said the focus must be distribution of vaccines to 300 million people, support for those who have lost jobs, and assistance to help businesses stay open.

The US death toll reached 322,832 on Tuesday. The 3,518 fatalities in 24 hours were the second-highest daily total of the pandemic.

Both houses of Congress passed the $900 billion Coronavirus relief bill on Monday night.

Senate Majority Leader Mitch McConnell, who blocked the HEROES Act before and after the November 3 election, announced the accord on the Senate floor on Sunday.

The revised package — the first since a $2.2 trillion plan in March — provides one-off payments to millions of Americans, revives lapsed unemployment benefits, and funds food assistance, and rental aid. It authorizes more than $284 billion for businesses and revive the Paycheck Protection Program, a loan program for small businesses that lapsed over the summer. There will be federally-backed loans and funding for schools, hospitals, and distribution of vaccines, and $15 billion for performance venues, theaters, and other cultural programs.

“We can finally report what our nation has needed to hear for a very long time,” McConnell said. “More help is on the way.”

Both the Senate and House approved the bill on Sunday night, and Donald Trump signed it just before midnight.

“We have now reached agreement on a bill that will crush the virus and put money in the pockets of working families who are struggling,” Speaker Nancy Pelosi wrote to Democrats on Sunday. “This emergency relief bill is an important initial step.”

Biden said in a statement, “I am heartened to see members of Congress heed that message, reach across the aisle, and work together. But this action in the lame-duck session is just the beginning. Our work is far from over.”

Senate Minority Leader Schumer echoed that the agreement was just a “down payment”: “Once this deal is signed into law, it cannot be the final word on congressional relief.”

Meanwhile, McConnell tried to cover up his months-long obstruction of assistance: “There is no doubt this new agreement contains input from our Democratic colleagues — it is bipartisan. But these matters could have been settled long ago.”

In the end, Democrats had to bow to McConnell’s rejection of any aid to states and cities to obtain the compromise package.