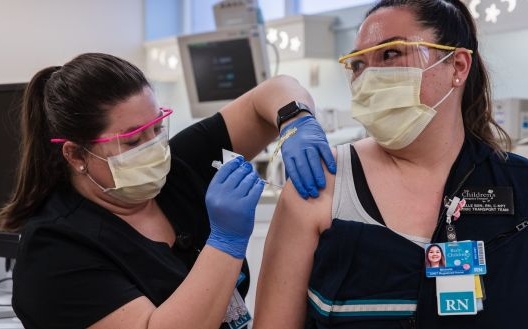 The Food and Drug Administration is set to approve the Moderna vaccine for distribution, after its vaccine advisory panel voted 29-0 with 1 abstention.

Gen. Gustave Perna, overseeing vaccine distribution, said on Monday that the Federal Government is preparing to ship almost 6 million doses of the Moderna vaccine to 3,285 locations in the first week after approval.

That would supplement the 3 million doses — enough for 1.5 million Americans — of Pfizer/BioNTech vaccine which is being dispatched this week.

ORIGINAL ENTRY, DEC 16: The US sets a new daily Coronavirus deaths record of 3,704.

All states except Hawaii are in “Unconstrollable Spread” status. Intensive care unit capacity is less than 20% in 21 states.

Hope is being placed in the initial vaccinations of 1.5 million Americans this week.

The first shots of the Pfizer/BioNTech vaccine were administered on Monday, and the version from Moderna is expected to receive emergency authorization from the Food and Drug Administration this week.

Both have shown more than 90% effectiveness in clinical trials.

Both were highly effective in preventing Covid-19 in clinical trials, but it will be months before a broad-enough swath of the population can be vaccinated. Officials are also scrambling to combat skepticism about the vaccines.

“As wonderful as this is, because it’s been an extraordinary manifestation of the fruits of science done in a very rapid way, it’s also bittersweet,” Dr. Anthony S. Fauci, the nation’s top infectious disease expert, said of the country’s split-screen reality on “CBS This Morning” on Wednesday.

The Government’s top Coronavirus expert, Dr. Anthony Fauci, linked news of the deaths and vaccine in a Wednesday interview, “As wonderful as this is, because it’s been an extraordinary manifestation of the fruits of science done in a very rapid way, it’s also bittersweet.”

Fauci, who joined medical and public health specialists in warning of a “surge upon a surge” this winter, said:

We should celebrate the fact that the science has come through, but it is not over yet. We have a ways to go. We have to abide by the public health measures that we talk about all the time.

He said social distancing, wearing masks, avoiding travel and indoor gatherings and frequent hand washing are “the bridge to get to the vaccine, which is going to get us out of this”.

Until we get a few more months down the road, do your best. Save lives, save American lives, save global lives, just by doing these simple measures.

The four top Republican and Democratic legislators neared agreement on Wednesday over a $900 billion relief package, providing emergency aid to individuals and companies.

The bill, the first relief package since the spring, will fund a new round of direct payments to millions of Americans, additional unemployment benefits, food assistance, and rental aid. There will be federally-backed loans and funding for schools, hospitals, and distribution of the vaccines.

The measure will also provide the funds to avoid a Government shutdown on Friday, as new funding arrangements are worked out.

McConnell reportedly told GOP legislators that the block on relief measures was jeopardizing the re-election of the two Republican senators in Georgia, Kelly Loeffler and David Perdue.

The Senate Majority Leader said the two Republicans were “getting hammered” in their campaigns.

Pelosi and Schumer agreed to McConnell’s demand to remove direct aid to states and cities from the package, while McConnell withdrew liability protection for businesses facing claims from workers over Coronavirus.

House Minority Leader McCarthy said there were “just the fine details we’ve got to get done”.

Schumer was also upbeat, “No one gets everything they want, but we’re feeling pretty good.” Pelosi was more cautious: “We’ll be ready when we’re ready. A lot of writing goes into it and the rest.”

The Biden Administration, which takes office on January 20, is planning a larger stimulus package, and economists agree more aid is needed.

Biden said on Wednesday, “The stimulus package is encouraging. But it’s a down payment — an important down payment on what’s going to have to be done beginning the end of January into February.”

McConnell had prevented adoption of a $2.2 trillion plan before the November 3 election.