Coronavirus: “Most Difficult Time” in US History as New Records Set 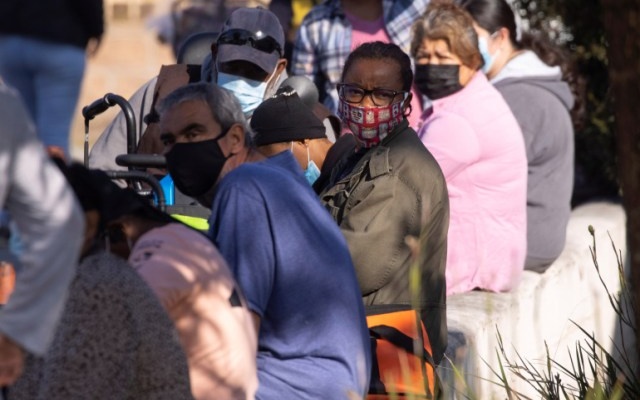 People wait in line outside a church which is part of the Los Angeles Regional Food Bank, November 19, 2020 (Mike Blake/Reuters)

The director of the Centers for Disease Control and Prevention warns of the “most diffcult time” in US history, amid new Coronavirus case records and the highest daily death toll since April.

Dr. Robert Redfield said on Wednesday in an address to the Chamber of Commerce Foundation:

The reality is December and January and February are going to be rough times. I actually believe they’re going to be the most difficult time in the public health history of this nation.

Setting the 22nd record in 23 days, hospitalizations passed the 100,000 mark, more than double the number at the start of November. Almost 19,400 patients are in intensive care.

“Everybody Must Be on Board”

Redfield said the surge could still be checked with measures such as universal wearing of masks in public places, “It’s not a fait accompli. We’re not defenseless. The truth is that mitigation works.”

However, he added, “But it’s not going to work if half of us do what we need to do. Probably not even if three-quarters do.”

And the director implicitly criticized Donald Trump and his medical confidante Scott Atlas, who quit on Monday, over their undermining of measures including the CDC guidance on masks.

“When you really want to get everybody on board, you’ve got to have clear, unified, reinforced messaging,” Redfield said. “The fact that we were still arguing in the summer about whether masks work was a problem.”

The CDC, reiterating its guidance for Thanksgiving, said Americans should not travel for the Christmas holidays.

“The best thing for Americans to do during the holiday season is to stay at home and not travel,” said Dr. Henry Walke, who oversees the agency’s pandemic response.

Despite the public health advice, air travel across the US last week was close to that during Thanksgiving in 2018.

Any thinking person has to be worried. That we have so many hospitalizations speaks to the fact that we have done a very poor job of controlling this pandemic.

It is spreading very rapidly, and in many places, it is basically spreading out of control.

Donald Trump said nothing about the pandemic yesterday. Instead, he released a 46-minute video on social media repeating his disinformation about a “stolen election”.