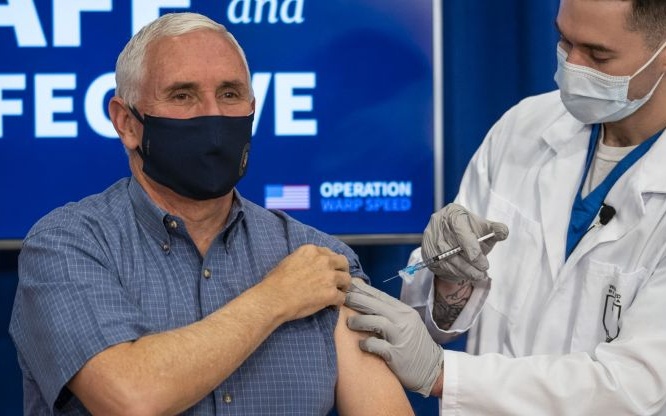 ORIGINAL ENTRY: The Food and Drug Administration approves the Moderna vaccine for emergency use against Coronavirus, opening the way to shipment of 5.9 million doses next week.

Added to the 3 million doses of Pfizer/BioNTech vaccine being dispensed this week, the doses will provide 8.9 million Americans with the first of two inoculations. Health care workers and staff and residents of care homes are the priority groups to receive the vaccine.

Unlike the Pfizer/BioNTech vaccine, Moderna’s version does not need extreme-cold storage and is delivered in smaller batches, so it can supplied to rural hospitals, local health departments, and community health centers.

In Washington, agreement on a $900 billion stimulus package is held up because of Republican senators objecting to provisions of the deal to help individual Americans and businesses.

Hospitalizations decreased slightly to 21,736. But 20 states have less than 20% capacity in intensive care units, with California down to 2.1%.

While Republican and Democratic leaders in Congress said they were close to a deal on the $900 billion relief package, objections by a few Republicans to the Federal Reserve’s power to distribute emergency funds held up confirmation.

Instead, legislators passed a 48-hour authorization to prevent the shutdown of the Federal Government at midnight.

“As of right now, we have not yet reached a final agreement, regretfully,” Majority Leader Mitch McConnell said on the Senate floor. “There’s no reason why the federal government funding should lapse while we hammer out our remaining differences.”

The compromise stimulus bill provides $600 stimulus checks for millions of Americans, the revival of a lapsed unemployment program at $300 per week, food and rental assistance, and support for businesses, schools, and vaccine distribution.

On Friday, Republican Sen. Pat Toomey put up an obstacle with a proposal barring a future Treasury Secretary from restarting five emergency loan programs created by the Federal Reserve. The schemes sustain credit for medium-size businesses, state and local governments, and corporations.

We’ve got to be able to solve that. I can’t believe all this effort and assistance to millions of Americans has come down to this obscure fund. It would be such a terrible waste.

Unless the relief bill is approved, unemployment benefits will cease for millions of Americans next week.

But Republican Sen. Ron Johnson blocked both attempts as “a shotgun approach” and criticized the stimulus efforts.