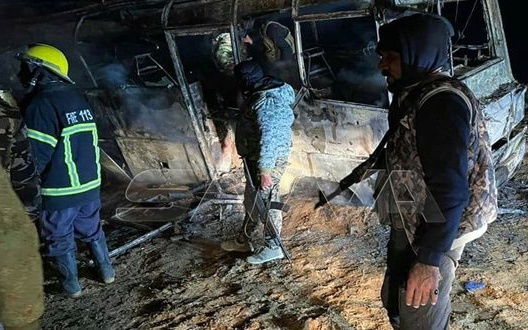 An attack on a bus in eastern Syria has reportedly killed at least 28 Assad regime troops.

Regime media said the bus was targeted on Wednesday in Deir ez-Zor Province, claiming 25 “citizens” were killed and 13 wounded.

But local sources said soldiers were travelling on the bus, most of them from the regime’s elite 4th Brigade. The sources reported up to 37 fatalities.

There was no immediate claim of responsibility for the attack on the road between Deir ez-Zor city and the ancient Roman city of Palmyra. However, the Islamic State has carried out a series of attacks on regime units in eastern and central Syria.

ISIS was removed from its last village, near the Iraq border, in March 2019 but cells have continued to operate, including in the Badia desert and near Palmyra.

In August, ISIS fighters killed at least two regional militia commanders and tens of troops in a series of ambushes and IED detonations.