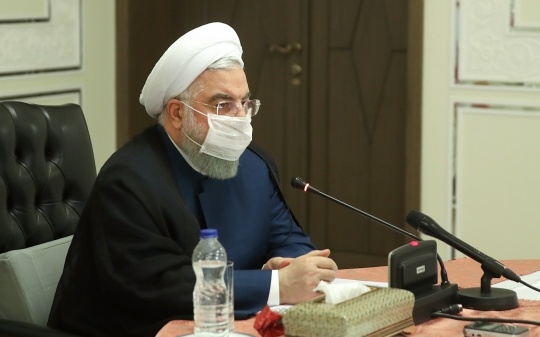 The Health Ministry announced another 479 deaths on Friday, just below Monday’s daily record of 486. The official death toll is now 43,896.

President Hassan Rouhani has added to his eight-point Coronavirus plan with the assurance of support to vulnerable social groups and businesses.

Addressing the Economic Coordination Headquarters on Tuesday, Rouhani said the Management and Planning Organization, Ministry of Cooperatives, Labor, and Social Welfare, and Central Bank have been assigned to allocate funds. He gave no further details.

Rouhani’s plan, for enforcement of social distancing and closure of non-essential businesses but rejecting a national lockdown, takes effect on Saturday.

On Tuesday, the Health Ministry announced another daily record of 13,352 cases. There were 482 deaths, just short of Monday’s record of 486.

ORIGINAL ENTRY, NOV. 16: President Hassan Rouhani has announced an eight-point plan in the face of a record-setting Coronavirus surge in Iran.

But the proposals are limited to enforcement of social distancing and a call for “public mobilisation of the nation and the Government”.

Meanwhile, the Health Ministry announced another high mark on Sunday with 12,543 daily cases, more than triple the 4,000 level — already a record — on October 6.

Rouhani said police and the paramilitary Basij would enforce social distancing against a “very small minority of violators who endanger the health security of the society”. The Health Ministry can impose fines on Iranians who do not quarantine when required.

But most of his “plan” was invocations to Iranian authorities “to pursue the implementation of all resolutions of the National Task Force” on Coronavirus, to media and politicians “to give priority to the task of informing and persuading the public in observing the health protocols”, and to “the intelligent and honorable people of Iran… to observe the rules of fighting coronavirus as their religious and social duty”.

It was left to Deputy Health Minister Alireza Raisi to say that the strict measures for “red zones”, including the capital Tehran and about 100 other towns and cities, will include the closure of non-essential businesses and services. Cars will not be allowed to leave or enter the cities.

In the red zones, about 1/3 of employees can travel to work. In the “orange zones” covering about 150 towns and cities, 50% can do so.

In March, during the initial wave of the pandemic, the Government implemented closures. However, with GDP projected to fall this year by 11% and with trade down 60% to 95% with countries such as China and Turkey, the measures were lifted on April 11.

Since a low point of about 800 daily cases in early May, the rate rose steadily and then exploded from September. Daily deaths have more than doubled since early Ocotber.

Medical and public health experts, including a member of the National Task Forces, have called for a lockdown of two to three weeks. But Rouhani has held out against the step.