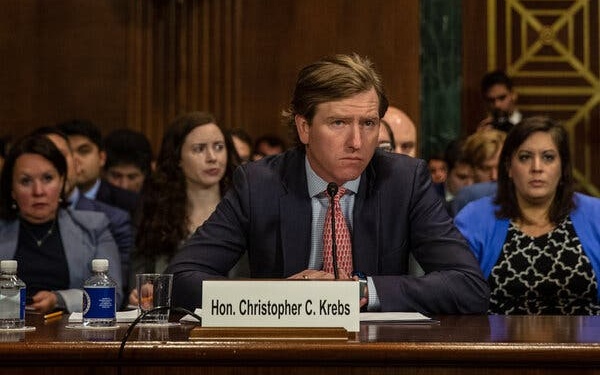 Trump announced the firing on Twitter on Tuesday, days after Krebs said it was imperative to counter the “hacking of minds as well as infrastructure”.

At the same time, the Department of Homeland Security assessed that the 2020 US elections were the “most secure in American history” — hours after Trump tweeted the conspiracy theory that a voting machine system “DELETED 2.7 MILLION TRUMP VOTES NATIONWIDE” and just before he repeated that “tens of thousands of votes were stolen from us and given to [President-elect Joe] Biden”.

The report on election security was distributed by Homeland Security’s Cybersecurity and Infrastructure Security Agency, led by Krebs.

He created a Rumor Control page on CISA’s site, an initiative praised by Acting Homeland Security Secretary Chad Wolf, to confront falsehoods such as “votes are being cast on behalf of dead people” and “if results as reported on election night change over the ensuing days or weeks, the process is hacked or compromised”.

And he used his Twitter feed to dismisses the conspiracy theories of Trump and his allies on Fox TV, such as the claim of a secret computer system switching votes from Trump to Biden.

Krebs told associates that he expected to be fired, and Trump fulfilled the prediction in a pair of tweets that reiterated the disinformation which the official was patrolling:

…votes from Trump to Biden, late voting, and many more. Therefore, effective immediately, Chris Krebs has been terminated as Director of the Cybersecurity and Infrastructure Security Agency.

Honored to serve. We did it right. Defend Today, Secure Tomrorow. #Protect2020

Ben Hovland, a Trump appointee who chairs the US Election Assistance Commission which issued the “most secure election” assessment, said Krebs was a “great director” who “showed a lot of leadership, particularly in the election space”.

Legislators denounced Trump’s capricious retribution. Sen. Angus King, an Independent and head of a cybersecurity mission, said, “By firing Mr. Krebs for simply doing his job, President Trump is inflicting severe damage on all Americans — who rely on CISA’s defenses, even if they don’t know it.”

He added, “Of all the things this president has done, this is the worst. To strike at the heart of the democratic system is beyond anything we have seen from any politician.”

Instead of rewarding this great service, President Trump is retaliating against Director Krebs and other officials who did their duty. It’s pathetic, but sadly predictable that upholding and protecting our democratic processes would be cause for firing.

I’ve worked well with him. I think he’s a real professional….

I think what he was trying to do in an unprecedented way was to connect with every state in the country, and give them what they needed to protect and have a firewall in place to protect against cyber-attacks.

And GOP Sen. Richard Burr declared that Krebs “a dedicated public servant who has done a remarkable job during a challenging time.”