Biden: “Nothing Will Slow Up Our Efforts” on Transition, Health Care, and Fight Against Coronavirus 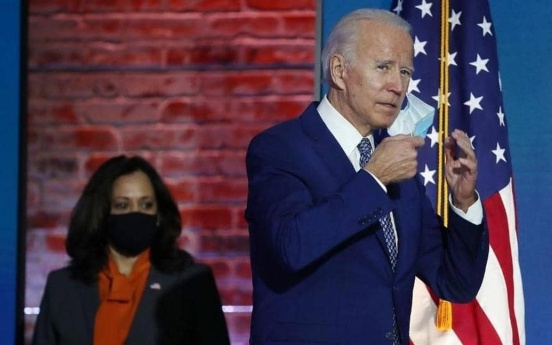 President-elect Joe Biden pledges that “nothing will slow up our efforts” for an effective transition to power, including measures to deal with the Coronavirus pandemic which has killed almost 240,000 Americans.

In a speech and press conference on Tuesday in Wilmington, Delaware, Biden responded to Donald Trump’s refusal of the election’s outcomes, disinformation, and attempts to block a handover.

“We are already beginning the transition,” the President-elect assured.

As the Supreme Court heard arguments in the Trump Administration’s effort to rip up ObamaCare, Biden spoke of Republican “right wing ideologues” trying to repeal the Affordable Care Act through Congress — failing in 2018 — and then through the judiciary.

In the middle of a deadly pandemic that’s affecting more than 10 million Americans, these ideologues are once again trying to strip health coverage away from the American people….

We have a moral obligation to ensure that health care is a right for all, not a privilege for a few.

The burial of ObamaCare would leave more than 20 million Americans without any insurance, would strip provisions from more than 100 million, and would prevent any support for pre-existing conditions such as Coronavirus.

On Monday, the Biden-Harris transition confirmed a 13-member Coronavirus Task Force of experts in medicine, public health, and technology. It will oversee a doubling of drive-through testing sites; a US public health job corps organizing 100,000 Americans for contact tracing; increased production of masks, face shields and other personal protective equipment; and pursuit of the development and distribution of a vaccine.

Biden emphasized, “The fact that they [the Trump camp] are not willing to acknowledge that we have won at this point if not of much consequence in our planning and what we are able to do between now and January 20.”

It’s an embarrassment, quite frankly. How can I say this tactfully? It will not help the President’s legacy. I think that…from my discussions with foreign leaders so far, they are hopeful that US democratic institutions are strong and have endured and at the end of the day it’s all going to come to fruition on January 20.