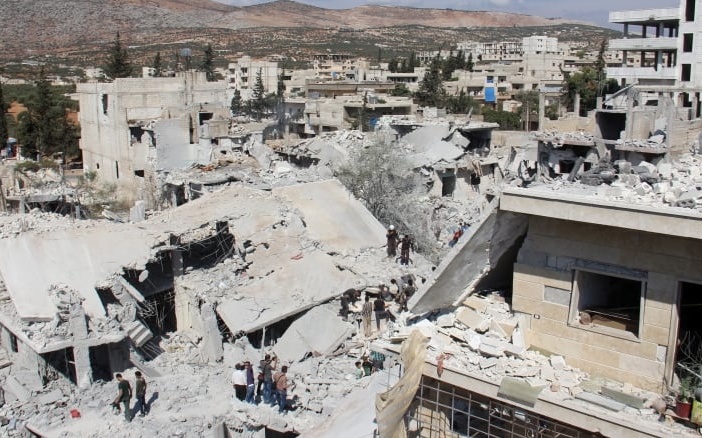 The US Treasury blacklisted six prominent individuals and 11 entities connected to the regime on Wednesday. They include the head of the General Intelligence Directorate, the Central Bank Governor, and businessman Khodr Taher Bin Ali, “an intermediary for the Fourth Division of the Syrian Arab Army”.

Bin Ali’s 11 businesses, including in the sanctions, are across the tourism, telecommunications, private security, and transportation industries. The Treasury said the companies generate revenue for the regime and Assad’s inner circle.

Treasury Secretary Steven Mnuchin said, “Those who continue to stand with the brutal regime of Bashar al-Assad further enable its corruption and human rights abuses.”

He noted that the sanctions were being imposed on the third anniversary of Russian-regime bombing that killed at least 34 civilians, including children, in Armanaz in northwest Idlib Province.

As we mark three years since the regime’s slaughter of Syrian civilians in Armanaz, Syria, the United States will continue to employ all of its tools and authorities to target the finances of anyone who profits from or facilitates the Assad regime’s abuse of the Syrian people.

Secretary of State Mike Pompeo said in a statement:

The Administration’s designations of senior Government of Syria officials, military commanders, and corrupt business leaders will not cease until the Assad regime and its enablers take irreversible steps to end their campaign of violence against the Syrian people and genuinely implement United Nations Security Council Resolution 2254 [calling for a ceasefire and political settlement].

In June, the US implemented the “Caesar Act”, extending sanctions against the regime over crimes against humanity and the deaths of thousands of detainees from executions, torture, and poor conditions.