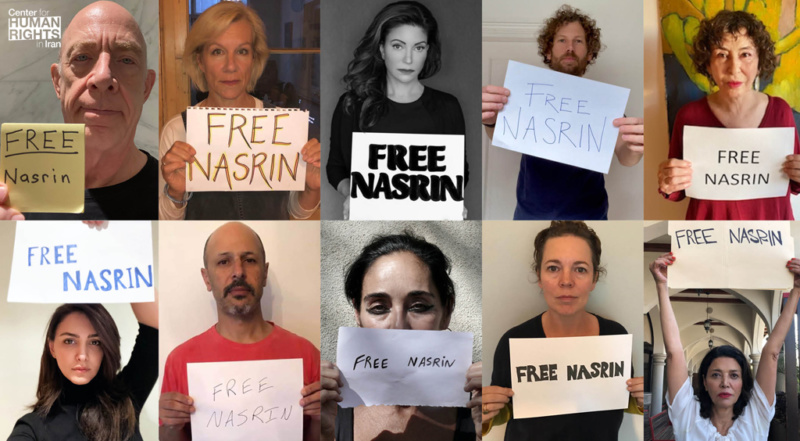 Artists and authors from around the world have made an impassioned appeal to Iran’s authorities to free political prisoner and human rights attorney Nasrin Sotoudeh, now in the second month of her hunger strike in Tehran’s Evin Prison.

We call on people across the world to join us in this grassroots online protest to #FreeNasrin and post their pictures of solidarity on their social media platforms.

Colman, the narrator of the forthcoming documentary Nasrin, said, “I’m proud to stand with Nasrin and call for her release as she risks everything to stand for dignity and justice in Iran.”

The International Bar Association has called on the Supreme Leader to authorize the release of political prisoners and human rights attorneys Nasrin Sotoudeh and Amirsalar Davoudi.

The IBA expressed its “deep concern” over Sotoudeh, who is entering the second month of a hunger strikes, and Davoudi, who is on hunger strike.

Soutoudeh, awarded the Human Rights Prize by the German Judges Association, has been condemned to concurrent sentences totaling 38 years and 148 lashes for her defense of activists, protesters, and women defying compulsory hijab.

Davoudi has been sentenced to 29 years and 111 lashes.

The IBA summarizes, “The unjust sentences of political prisoners, including lawyers and human rights defenders, may turn into death sentences if urgent action is not taken.”

The Supreme Leader has made no public response to the letter.

“Nasrin Sotoudeh has become a symbol of the Iranian civil rights movement through her courage and tireless commitment to human rights and the rule of law,” the presidents of the German Association, Barbara Stockinger and Joachim Lüblinghoff, said on Wednesday.

They said that Sotoudeh needs wide international support, and that they wanted to honor her “highly impressive commitment in Iran and to bring her fate to the public attention”.

Last week the American literature and rights PEN Association called for the immediate release of Sotoudeh and other political prisoners, and for an end to judicial and legal harassment of their families.

ORIGINAL ENTRY, AUGUST 28: The health of political prisoner and human rights lawyer Nasrin Sotoudeh (pictured), who is on hunger strike in Iran’s Evin Prison, is deteriorating.

Sotoudeh’s husband Reza Khandan wrote on social media on Thursday that her blood pressure and blood sugar levels are fluctuating greatly, and that her weight has dropped to 47 kg (103 lbs.) from 53 kg (117 lbs.). She is suffering from nausea, restricting her intake of water and sugar.

The distinguished lawyer, awarded the Sakharov Prize for Human Rights, went on hunger strike on August 11 to protest the “unfair and illegal” conditions for Iran’s political prisoners, with the situation worsening amid the Coronavirus pandemic.

In a letter on August 22, 44 Iranian lawyers urged Sotoudeh to end the strike and not endanger her life.

The attorney was a political prisoner from 2010 to 2013 over her representation of participants in mass protests after Iran’s dispute 2009 Presidential election. She was detained again in June 2018 over her defense of woman protesting against compulsory hijab, and sentenced to a total of 33 years in prison and 148 lashes for “conspiracy against national security”, “spreading lies”, and “disturbing public opinion”.

Authorities have refused to grant temporary furlough to Sotoudeh, despite releasing tens of thousands of prisoners because of the Coronavirus pandemic. They have maintained pressure on her by sentencing her husband to six years in prison and arresting and interrogating her daughter Mehraveh Khandan on August 17.